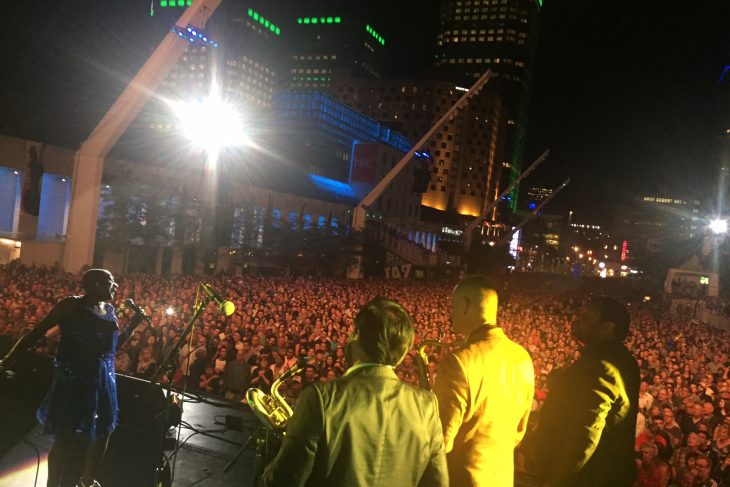 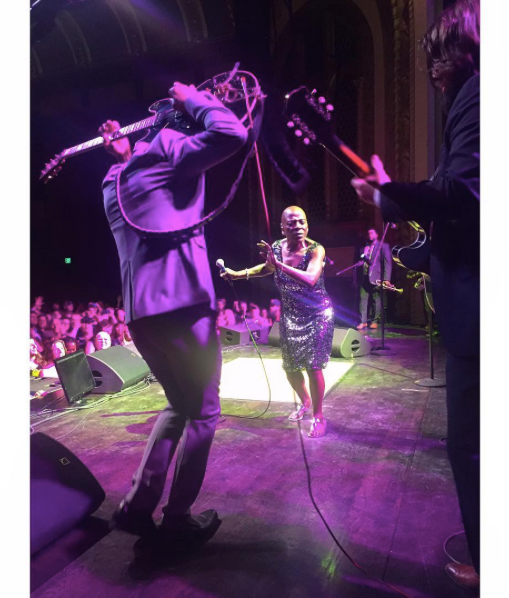 It’s been two weeks and three days since I watched my friend, my boss, and a once-in-a-lifetime lady, Sharon Jones, take her final breath. And yet if you told me tomorrow that she had risen again to perform one final shimmying, sequined, soul-filled show, it wouldn’t surprise me one bit.

Sharon Jones was a fighter, stubborn and seemingly unstoppable in an almost comic way. She had to be, born ebony black as the youngest of six children in the spring of 1956 in the segregated American South. She had to be, standing all of 4’11″, curvy and stout like the fire hydrants lining the streets of the Bedford-Stuyvesant projects she was raised in amid the race riots of the 1960s. She had to be—the first of her family to attend university, working as a prison guard at Riker’s Island and manning armored vehicles for Wells Fargo, all to fund her dream of “making it” as a singer. She had to be, as a record executive told her she was “too old, too fat and too black” to be a star, as boyfriends told her to give up the dream and settle down, and as she and a ragtag group of college- (and one high school-) aged kids set out to make her a star their own damn selves. She had to be, when, finally starting to find success on her own terms, she was diagnosed with Stage 2 pancreatic cancer. In 2014, during her year of remission when she toured the globe from Australia to Helsinki, and when her cancer returned in 2015 without so much as a single canceled show. Sharon fought every day of her life, from the moment she was born till her very last breath.

As the assistant tour manager for Sharon Jones and her band the Dap-Kings, I was lucky to live on a bus with Sharon for the nearly three years she performed after her initial cancer diagnosis. We crossed the US back and forth three times together, during which I saw her perform more than 100 times, on stages grand and humble, from Madison Square Garden to high school auditoriums. The size of the crowd didn’t much matter to Sharon or the Dap-Kings­–wherever they played, they brought electric energy. There wasn’t a single night I wasn’t inspired by what Sharon and the band did on stage—or when Sharon didn’t leave her all (and then some) on it.

This summer, on a “day off,” Sharon and I flew from Austin to New York City, where her doctors confirmed news we’d been told in a Texas emergency room a couple days earlier: her cancer was spreading aggressively and painfully to her liver, her lungs, the remains of her pancreas. Her doctors wanted her to start a combo of stage IV chemo meds immediately, that very day, to which Sharon said, “Well good. I’ve got a gig tomorrow that I’m not going to miss.” And sure enough, after this first round of chemo, Sharon and I were back on a plane the next morning, bound for Atlanta, where she took the stage for a 40-minute opening set for Hall & Oates, to the standing ovation of a crowd who never would’ve believed what she went through to be there.

This is the Sharon that most people knew: the polished performer, perfectly winged kohl eyeliner, red lips, flying fringe, sparkling jewels, a voice and stage presence so much larger than her petite frame, a performer who straddled the soulful sacred of church and the frenzy of funk. But the woman I lived with and loved was unvarnished. One-on-one, or in a small group, Sharon could be startlingly forthright on topics from the minute (her intestinal discomfort) to the massive (her mortality). She was plain-spoken and foul-mouthed (she invented her own swear words to cover gaps in the English language), loved fishing second only to singing, had a penchant for naked-survival-related reality television, and when she was really delighted by a meal, she would sing and dance and yell at it. In an age of curated personas and personalities, Sharon was never anything but 100% herself in all of her complexities. 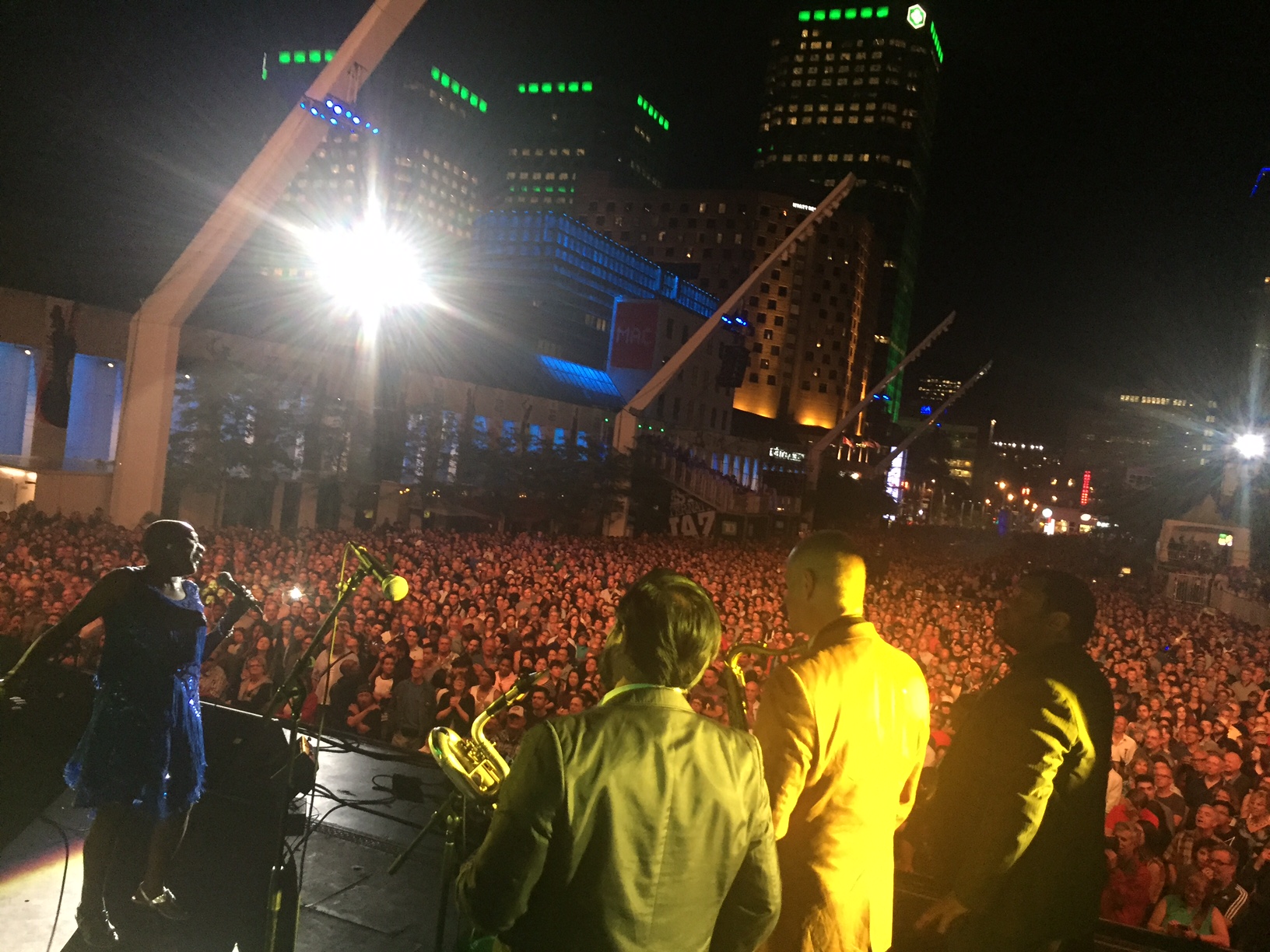 Throughout it all what coursed through Sharon’s veins was more music than blood. Music, performing, and her band brought her life and eased her pain. This summer, even as her disease wreaked havoc on her body and energy, Sharon sounded better than ever, opening for bands night after night and coaxing standing ovations from crowds who were not necessarily there for her. On the nights when we got to play in front of our own fans, stepping on club stages rather than amphitheaters, she debuted new songs that were the best she’d ever sung, pushing curfews to dance just a little bit longer. And she was planning for more, finishing a new Dap-Kings album and recording a gospel album. Even in the last week of her life, after a stroke took Sharon’s speaking voice, she was still singing, still harmonizing with her backup singers Saun and Starr, still mesmerized by the talent of her band, still so happy to do what they had always done together.

In that last week, Sharon was still making us laugh, still sassy and in charge, the center of our universe, the sun we happily orbited around. Even as she was dying, her spirit filled up the hospital room, the way it had with every space she had ever occupied.

Our world lost untold soul and sparkle when Sharon passed away, but not nearly as much as she put into it.