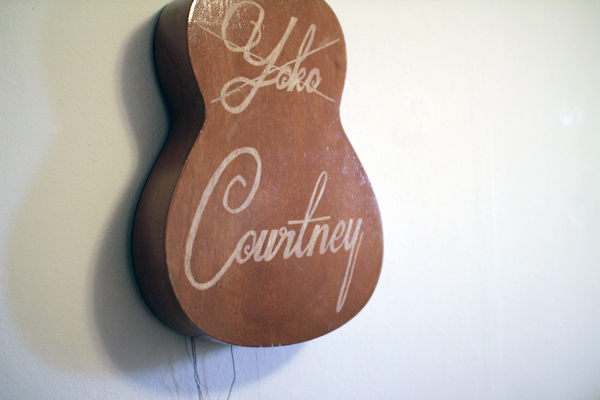 Lindsey Apodaca’s work is reliably brassy stuff. She obsessively collects Catholic paraphernalia, vintage stuffed animals, girly juvenilia and teenage contraband, which she uses to make sometimes-funny, sometimes-pervy, sometimes-offensive, sometimes-sweet assemblages and sculptures. Apodaca’s knack for storytelling with found and altered objects got personal in her show American Spirit at Vignettes on July 12th. Apodaca describes some of the thought behind her work….

What is this show about?
I’m exploring the different themes of my high school life. An outsider girl experience.

Did you grow up here?
Yeah, in Seattle.

What’s your relationship to all the objects you collect?
I’ve always been really nostalgic with objects and I use them as a way of exploring obsession. I was obsessive in high school, but at that age you can be obsessed with one thing one day and the next day learn something new that blows your mind and you absolutely fall for that instead. If I could have got tattoos in high school I would have been in trouble!

Where do you find this stuff?
Thrift stores, gifts people give me. I went to the Bainbridge Island Rotary Club auction and got this guitar for three dollars. 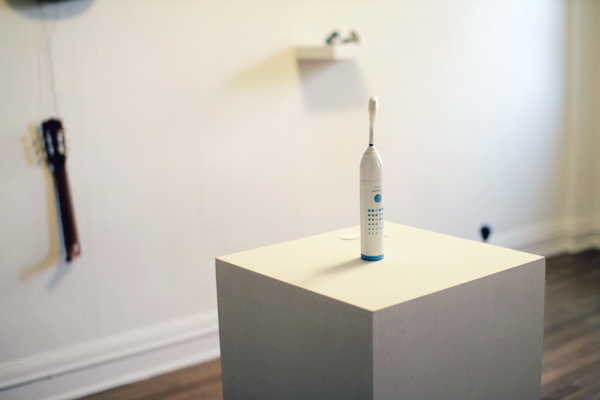 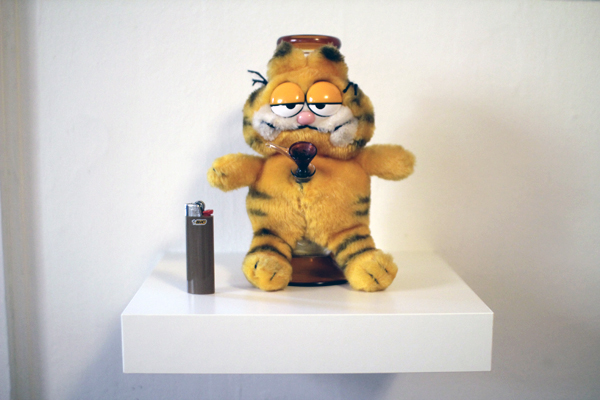 And the Yoko Courtney guitar…
When I was younger, learning about Yoko Ono was empowering and I was fascinated by the accusations about her breaking up the Beatles. Then discovering Courtney and Hole, and the whole Courtney-killed-Kurt thing is another iteration of that blame game. I’ve been etching into objects as a way to recall carving things into the surface of your school desk. All these objects and the way I think about that period are so influenced by my adult life now. I am really into exploring what things mean at different stages of my life.

So do you consider your work feminist?
It’s the same thing for me with feminism and sexuality and understanding things like gender. These aren’t things that I claim to be that well versed in, but what I do know and hold to be true has drastically changed from my teenage years. It comes up a little in my work with Minnie and Mickey. I’ve used Minnie and Mickey a lot in my art but this is the first time I’ve put him with Minnie. I found two really old stuffed animals, cut their backs off, then sewed them together. In high school I was learning about feminism, and representing versions of Minnie interested me, when Mickey is usually the figurehead and icon that gets represented most.

The show is titled “American Spirit” and you have all these subversive teen things. You’ve included a pair of broken Lolita glasses too, and of course Nabokov’s Lolita was one of the first novels to describe the emergence of American teen culture in the 50s. Does American teen culture still  = American identity?
Totally. I really equate those two things. The Americana is evident in all the teen icons I’m referencing, and the spirit part is referenced in the crystals and the cross. Also, I just quit smoking American Spirits. 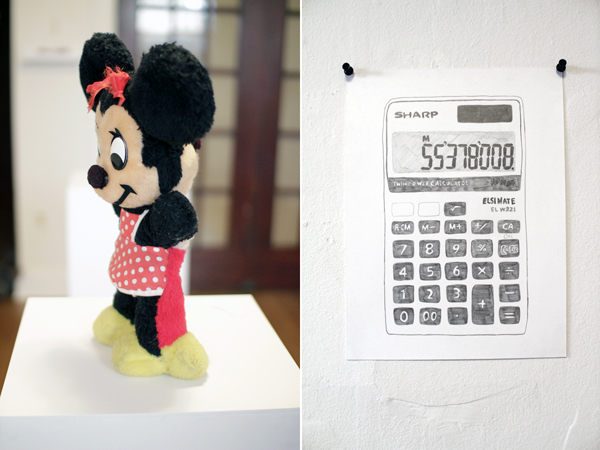