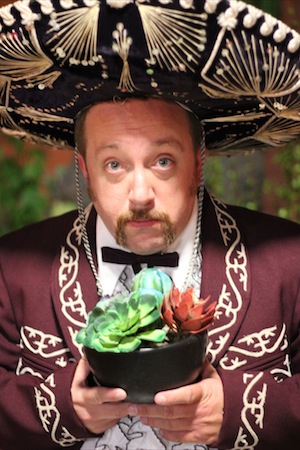 You’re recording your first ever standup comedy CD at the Comedy Underground June 7-10. Why?
It’s the very first Comedy Club I ever set foot in. I was 13 years old, I took the bus back and forth from Auburn to do the open mic and I was absolutely terrible. They had a wall of photos of all the famous people who had performed there and I wanted to be on that wall so badly! Now the wall is gone and has been replaced by a mural of a locomotive. Shit happens.

You set up a Kickstarter campaign for this production and posted a video in which you had your mom talk about your project “over drinks.” Tell us, did you get your mom drunk to help with your Kickstarter campaign?
That was my Mom, completely unscripted and hammered! We talked about it beforehand and she was really game for it. After realizing how easily she gets drunk I began to understand how I was conceived in her teens…It helped a ton, too, the first day that video went out, 30% of our total pledges were made. Go Mom! She’s amazing!

This CD is being produced by Matt Bayles (Mastodon, Isis, Minus the Bear)? What do you think such a respected hard rock producer will bring to this comedy recording?
Matt has made some the most Kick-Ass metal albums ever! He has an amazing ear and I wanted to bring his talent to a spoken word recording. A lot of stand-up albums are very dry and impersonal. I wanted something that sounded like you were experiencing the show and something with replay value. I told Matt that I want it to be Iron Maiden’s “Live After Death” of comedy recordings.

Word has it you can also shred on the guitar. Is this an example of the old adage that musicians always want to be comics and comics always want to be musicians? If so, which one are you?
I do alright. If you’re into Progressive European Disco Fusion then get those pants off, ladies/gentlemen! I started playing music to counter my very early disappointment with not being funny yet. It worked. Now? I receive 100% of the attention, don’t have to share my success with anyone and don’t have to carry anything heavier than weight of family’s disapproval. Oh, and no bass solos!!

Is there anything else you’d like to add?
Please come to these shows! My biggest fear is dying alone…