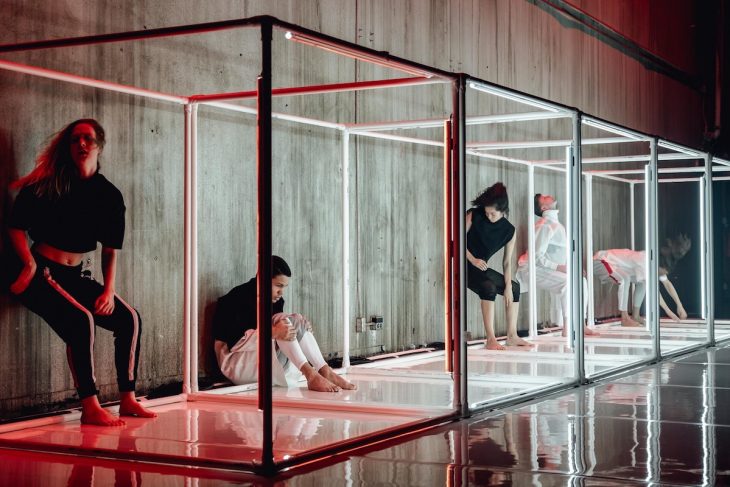 Red laser beams shoot from four robotic arms, crisscrossing the stage of Cornish Playhouse. Human-size PVC-pipe boxes line the exposed concrete back wall, and an abstract PVC-pipe sculpture hangs from the ceiling like a sci-fi mobile. A central down light shines a dazzling pyramidical shaft on the glossy white floor and a live-feed video projected on a high, suspended screen shows five performers slowly rotating below. Sinister pulsing synth music by Monika Khot completes the ominous tech-scape of Tectonic Marrow Society’s Pylon III. The spectacle impresses, but the performance doesn’t fully realize the promise of the set.

The dancers begin in a state of isolated trauma. Cameo Lethem flails and kicks inside a PVC box. Alicia Pugh prowls the space on all fours. Erica Badgeley and Alexander Quetell frantically wave at their hair and mime smoking a cigarette. The four come together in a line connected at the elbows that folds and unfolds like a Jacob’s ladder, then diffuse again into their personal journey of anguish. An arc begins to develop as more controlled, autonomous movement replaces the flailing. The dancing becomes cooperative and the music brighter, suggesting some kind of resolution, but then the dancers return to material similar to the tortured beginning. Much of the dancing is striking and dynamic, but these charged moments fail to develop meaning because the choreography never creates an internal logic. One section of dancing follows another without clarity around why anything is happening. What afflicts these performers and why are they suffering? The ominous nature of the set suggests it’s their environment; perhaps they’re learning to live in an inhospitable place. When dancers rearrange the PVC cages they develop an exciting power over the space, but the following excess of conflicting choreographic images muddles the developing through-line.

The performance suffers most during intermittent theatrical interludes, in which Stefan Richmond performs a disjointed, poetic existential crisis, crying out to the heavens with lines like “I don’t know my name!” and “Am I even awake?” The overwrought theatricality distances us from the character’s plight because it’s impossible to ignore the capitol-A Acting, a constant reminder that none of this is real. The choreography similarly provides no opportunity for dancers to become humans we can empathize with, keeping the work at an emotional arm’s length. Character consistency or fully realized relationships between the dancers would make this a much different show.

Despite these stumbles, Pylon III spotlights some of Seattle’s most skilled dance artists. Badgeley, recently returned from two years dancing in Europe, is impossible not to watch: Her electric energy draws attention and her contemporary technique keeps it there. Gracefully melting to the ground, she rebounds her body mass into a glide across the floor, folding in half and springing from a back arch to standing, as if gravity were nothing. Pugh is equally captivating. Like a lion in the wild, she exudes a cool power, as if she could go from perfectly relaxed to attack in an instant. Her long and articulate limbs cut through the space, the rare dancer whose scale of movement is matched by the level of her control.

The design, program notes and previous two iterations of Pester’s PYLON series suggest that the work contains some commentary on our increasingly digital world, but there’s no cohesive takeaway from Pylon III other than generic doom and gloom. The performers show more autonomy toward the end of the work, but it isn’t clear if their environment is what truly ails them. When they carry a bamboo plant onstage (something organic!) there’s an opportunity to break away from the technological angst, but the performers just keep moving it around. Even though they exhibit more power over their surroundings, they can’t decide what to do with it, suggesting that it’s not technology but rather the characters they play that are the performers’ worst enemy.