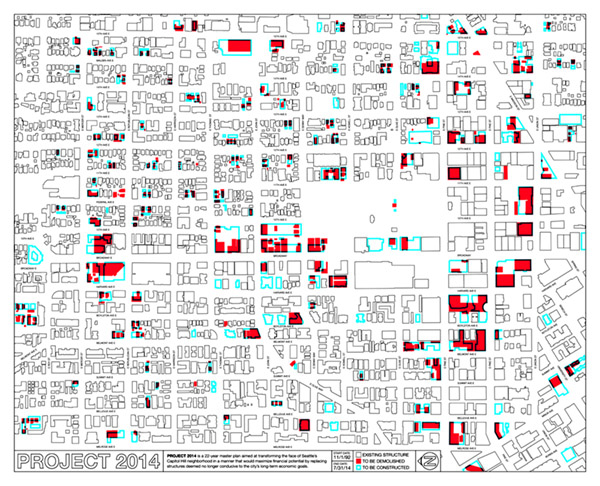 In 1992 I moved to Capitol Hill from Burien to study graphic design at SCCC. I shared a one-bedroom apartment across the street from Thumper’s at 15th and Pine with another student (I got the bedroom, he got the living room). Our rent was $212.50 each and most of the businesses along Pine between 12th and 15th were unoccupied.

This was before the city rebranded the Pike/Pine corridor, and most of the action was still along Broadway. But things were changing: 1993 saw the opening of the Cuff, Bauhaus and Babeland, followed by Linda’s and MOE in ’94, and later Bimbo’s, the Baltic Room and the Elysian. All of these businesses joined stalwarts Piecora’s, the Wildrose, Neighbours and the Comet to revamp the booming, post-grunge face of Capitol Hill.

Some things got lost in the shuffle. The Easy (Seattle’s other lesbian bar) closed down; Jimmy Woo’s Jade Pagoda, Rocket Pizza and Orpheum Records on the north end of Broadway are now ancient history; and eventually the nexus block of Pine that housed Bimbo’s and a half-dozen other small businesses was razed to build a great, gaudy new apartment building.

This cycle of booming construction (and inevitable busts) has played out a couple of times over the past two decades, causing vacant lots to be filled, beloved shops to shutter and a lot less sky to be visible from the street.

I wanted to document, as accurately as possible, the change that has swept across the neighborhood since I first called it home—but where to begin? Fortunately, an architect friend had a vector map of all the buildings in Seattle, which served as my starting point. The map wasn’t dated, but I noticed that it included both Seattle First Christian Church, which was damaged in the 2001 Nisqually Quake and subsequently torn down, and SCCC’s Mitchell Activity Center, which was built in 1996. So I deduced that the map was created between 1996 and 2002.

To show the current state of the Hill, I started by comparing that map to satellite views of the area. That still left any buildings constructed since Google’s last map update unaccounted for, as well as anything built between my start-date of ’92 and when my vector map was created.

So I spent a weekend riding my bike up and down every street—from I-5 to 15th Ave. E and E Roy St. to E Union St.— noting any buildings that appeared to be from the early-’90s, any that I knew had been built in the past few years, and Proposed Land Use Actions for any future developments that were in the works. It was amazing to reconnect with and rediscover the neighborhood I thought I knew so well. (How long have those Hobbit cottages on the North end of Bellevue Ave. been there?)

For the next week I pored over the Seattle Department of Planning and Development website and the King County Parcel Viewer to double-check my work. Little did I know this would take pretty much every waking hour that I wasn’t at work. Finally, with a few lots not yet accounted for, I picked the brains of some Capitol Hill old-timers to fill in the remaining holes. Even with the wealth of information I gleaned from the Internet, the picture was still incomplete without the memories of the people who inhabited the space.

Today, Piecora’s has sold their building to developers, every other block is a towering, faceless behemoth, and single-family houses are increasingly rare. We sure have lost a lot of that Capitol Hill jazz since 1992.

This piece, originally titled “Project 2013,” first showed in Vigil at LoveCityLove in August 2013. To report errors or order your own print, contact danp@cityartsmagazine.com.

To view the image at a larger size, click the thumbnail below.