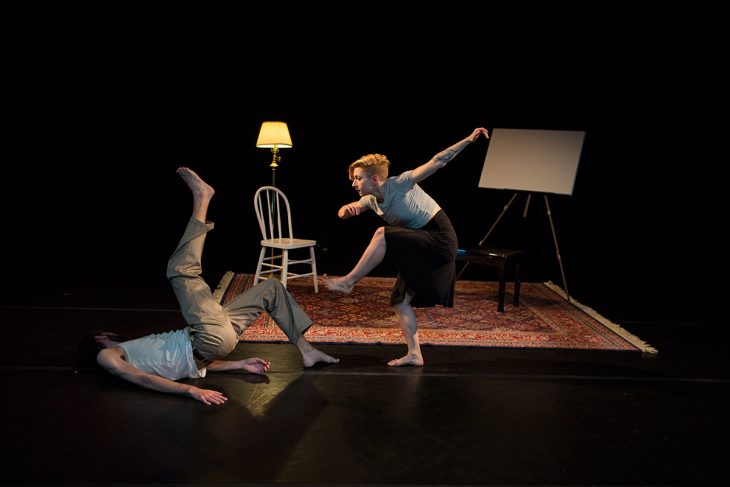 Velocity Dance Center’s biannual choreographic pressure cooker, The Bridge Project, asks artists who have been making work in Seattle for fewer than three years to make a show in three weeks. The open audition always attracts young and recently transplanted dancers, making it an ideal platform to scout for fresh voices and talented newcomers and the most recent iteration, presented at Velocity last weekend, did not disappoint.

Leslie Kraus, who is fresh out of UW’s MFA program, may be somewhat new to Seattle, but her impressive resume includes eight years as a principal dancer for the New York-based Kate Weare Company and performing in Punchdrunk’s much-lauded immersive dance-theatre show Sleep No More. Her work, Lusca, exudes a corresponding maturity that is supported by excellent dancers, Christopher Peterson and Leah Russell. The two are contained by a pared-back set—a bench, a chair, a lamp, a rug—that places them in the domestic sphere. For a while the two complete absurd tasks. Snap three times together. Balance on one foot, wrapped around each other awkwardly, bounce five times while counting. The unfolding relationship is sometimes one of support, but mostly one where their approach to the movement distinguishes and isolates them. Peterson dances as if his angular and marionette-like movement is just the way energy expresses itself through the body. Russell, by contrast, seems propelled by a seriousness and perfectionism. She reaches her hand up, attending to its perfect straightness while he lies on the floor, an image which easily parallels with double standards for women—that one must be flawless to be taken seriously.

Michael “Majinn” O’Neal presents another duet, Femme y Feroce, bridging his training in both street and classical dance styles. Angel “Moonyeka” Alviar and El Nyberg begin in a low blue glow as upbeat plucky guitar accompanies them in spiraling movement down to the floor and up again. Hip swivels and brassy looks at the audience accent the flowing modern dance. Much of the movement is in unison, but it lacks clarity—not just in the details of the steps, which are all over the place, but also in intention. The piece seems to be about joy but the dancers smile tentatively; they don’t appear to be feeling it. This all changes when the two soften into a sweet hug center-stage, and they fill with tangible warmth. A second section captures their joy better, especially when each has a moment of solo as the other looks on: Nyberg carves through space with curving, reaching limbs, soaring like a bird on the wind. Alviar incorporates her articulate and playful popping, which brings a giant smile to her face and a cheer from the audience. The piece is at its best when it plays to each dancer’s strength and the lovely femme intimacy could easily go on much longer and be more incorporated into the choreography.

Jordan Macintosh-Hougham’s work begins as they approach an onstage video camera. A live feed is projected on the back wall, bringing their facial expressions into giant, intimate proportions. In a yellow wig, they lean nervously away from the camera, playing with coming in and out of frame. Upstage Tayler Tucker, in a bright blue wig, enters by inch-worming her toes, setting off audience chuckles that continue throughout the duration of Bad! Bad! Bad!. Soon a flurry of dancers in candy-colored wigs emerge unexpectedly from behind curtains and out of the audience. Like tropical fish in a tank, they gather and spread apart in space, each with their own spastic, flailing or fidgety dance trying to upstage the others. It’s playful, but not without depth. Alex Nystrom asks the audience rhetorical existential questions, but we are distracted by Shannon Adams’ full-bodied boogie behind her. Nystrom’s character develops into an outsider of sorts, tagging along behind the irreverent group or watching from the side. In the end, she is left alone with the camera, sneering and pointing at it with sardonic finger guns. Her grumpiness doesn’t last long, however. Seduced by the camera, she soon poses and dances like everyone else. Carrying the camera with her backstage, the live-feed reveals the rest of the cast happily waiting for her; she’s not as much of an outsider as she perceived.

The final work is from another accomplished transplant, Hope Goldman, who recently relocated from Chicago. Gust shows Goldman’s attention to precision immediately as the three dancers, clad in earth tones, walk on stage perfectly synced, raise one knee and look down. Each angle and point of focus is accounted for, creating an almost militaristic severity even as they join their arms together into a position reminiscent of a classical statue—each forearm clicking into place to construct a curve. Sam Ashton and Elijah Kirk manipulate Danielle Evelena Doell in a rhythmic pattern, folding and unfolding her limbs. Later, that precision is released in favor of skittering through the space, the dancers caught in eddies that swirl them around and spit them out in another direction, compelled by some unseen force. The rigor of the work is clear, but meaning or story remain oblique, making it difficult to relate to.

Bridge Project remains an opportunity for young or emerging artists to show work, but this iteration also curated perspectives from different locations and communities.This Bridge Project was good but not particularly distinct, the one thing setting it apart from its predecessors is a program that lists more unfamiliar names than others in recent memory. With Seattle increasingly becoming a destination for top-tier dance artists, the quality of both the dances and the dancers at Bridge Project is as strong as it’s ever been, promising a future of exciting local performance.