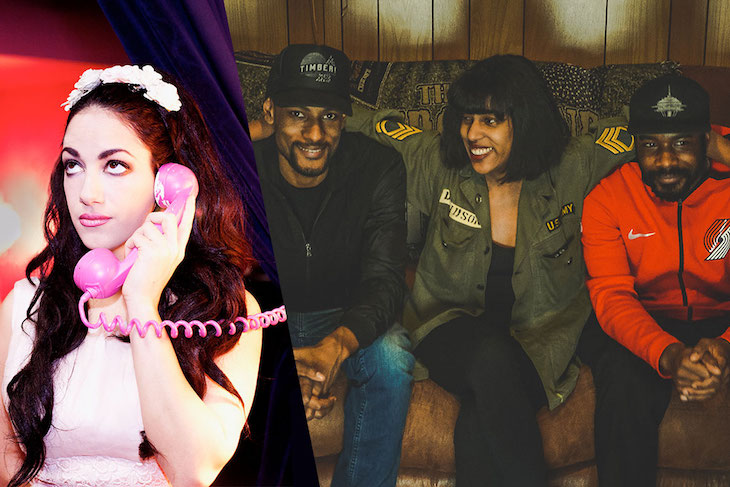 “‘Crush’ is an understatement. We’re in love with each other’s bands!” says Eva Walker, lead singer and guitarist for the Black Tones. Years ago, Walker was such a fan of Prom Queen that she decided that she and singer-songwriter-fashion icon Celene Ramadan were going to be friends. The two finally met when Ramadan attended a Black Tones performance at Theatre Off Jackson and introduced herself to Walker.

“She gave me her card that said Prom Queen and I was like, ‘Oh my god I love you!'” Walker says. “We must’ve hugged for 10 minutes.”

That was a year ago. This weekend, the Black Tones and Prom Queen fulfill their commingled destiny when they play the fourth installment of Band Crush, City Arts’ live musical-mashup concert series. Given their shared love for vintage sounds—’60s-inspired girl-group pop for Prom Queen; soulful, blues-based rock ‘n’ roll, or as Walker puts it, “Kurt Cobain and cornbread” for the Black Tones—it should be a phenomenal evening of unprecedented sights and sounds.

Ramadan and Walker got a taste of collaboration last September, when Walker sang a duet with Ramadan during the release party for Prom Queen’s Doom-Wop LP, which Emily Nokes described in her Album of the Month review as “refreshing as a lunch-break cocktail.” Saturday’s performance will find the two coming together in a more sustained and intermingled format.

“We wanna try to make it special, integrated,” Ramadan says. “We’re gonna trade off mini sets with each other—we’ll do a few songs; they’ll do a few songs—and then at the end we’ll do a mini-set set together. We picked three songs to collaborate on that I feel will be really beautiful when played with more people.” With Prom Queen’s usual six-piece band, including sax and backup singers, and the guitar-bass-drums of the Black Tones, the stage will be packed.

“Working with Eva is such a dream because she’s so sharp musically, and it’s hard to find people like that,” Ramadan says. “I’ve been a fan and admirer for all she’s able to do musically, so I wanted to do more and more with them as a band and let people know who they are.”

Over the years, Prom Queen’s opulent, wildly creative film and music projects have been the subject of many City Arts stories, but the Black Tones have remained largely under the radar. Comprised of Seattle natives and twin siblings Eva and Cedric Walker, the latter of whom decided to learn drums to back up his sister the first time he saw her perform, plus bassist Robbie Little, the band has been together in various incarnations since 2011. They’ve posted only three songs to their BandCamp page, but in recent years scored great gigs and festival slots on the strength of their live shows.

“It’s happened all of a sudden, like ‘Oh yeah they like us!” Walker says of the band’s current wave, which they’re riding to a once-in-a-lifetime show this weekend.

“It went from discovering Celene and needing to be her friend to being her Band Crush,” Walker says. “That’s mind blowing.”

Catch Prom Queen and the Black Tones playing City Arts Band Crush this Saturday, Feb. 10 at the Piranha Shop. Tickets are going fast so get on it!