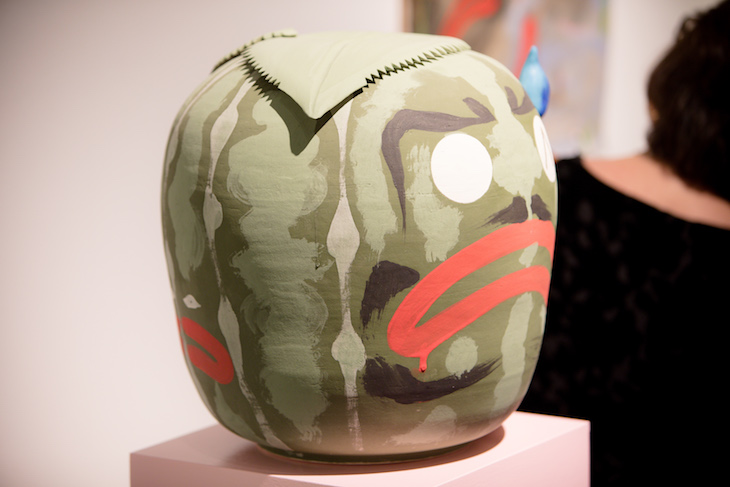 Upon entering the top floor-gallery of the Wing Luke Museum—a somewhat small, meditative space suspended above the bustle of commerce outside—visitors are greeted by a grimacing visage across the smooth face of a ceramic watermelon. This gaping mouth, slathered in bright lipstick red, cuts across the variegated hues of the gourd’s green skin. A single plump bead of sweat squeezes from the brow. “Anxious Watermelon,” perched on a plinth painted something approaching Millennial Pink, is an amalgamation of Alex Anderson’s past and present, as well as his Black and Japanese heritage.

It’s the first thing one encounters in Lore Re-Imagined, which is the first public exhibit guest curator Chieko Phillips has ever orchestrated. For her day job, Phillips serves as Heritage Support Specialist at 4Culture. Before that (after earning an advanced degree in museology from UW in 2011) Phillips served as executive director at BlackPast.org, public program curator at the Photographic Center NW, and worked stretches at both the Northwest African American Museum and the United Negro College Fund. Phillips met me at the Wing Luke one afternoon in June to discuss the stories behind an exhibit about storytelling.

As we peer around the walls of the gallery, two other pieces predominate: Megumi Shauna Arai’s “Unnamed Lake,” a large quilt made in the sashiko tradition, a style of communal embroidery that originated in Northern Japan to pass long chilly winter days. To construct the piece, Arai arranged for 42 strangers to come sew together on site at the museum. The conversations that occurred over the course of those months were recorded and are now being played back, a slightly muffled chorus rising and falling, from behind the folds of fabric.

In an adjoining room, an installation by Satpreet Kahlon sprawls. As though mapping illegible, ungraspable depths of mind, memory or place, the piece is an abstract landscape, perhaps a jumbled cityscape made from things ephemeral and forgettable: string stapled to the carpet, swaths of paper tenuously taped to half-structures made of flimsy slips of wood. This landscape is bisected: One side more open and airy, scattered with personal or familial artifacts like bangles, photos and messages typed on slips of parchment. The other half is shrouded in what looks like canopies or sails, or closed off by partitions made of fragments of plywood.

“When I saw this, it immediately resonated with me,” Phillips says as we circle back to Anderson’s watermelon. “I think that’s one of the things that’s so great about this show being at the Wing. Maybe this is too personal, but for a part of my life I wouldn’t have felt comfortable in an Asian-American museum because that wasn’t really a part of my community growing up. So to be in this space now, to be able to see a piece of work that exactly resonates with my identity is powerful.”

You don’t really think of yourself a curator, right?
Yeah, I consider myself a history person and prefer to say I develop exhibits. I spend a lot of time at history museums, with historical societies and the work I was doing at NAAM was more culture-based and really more narrative-driven, not necessarily fine-art driven, using community-based curation practices which incorporate more than just the voice of one curator.

What does a Heritage Support Specialist do exactly?
4Culture Heritage supports the health and growth of the heritage field in King County. In addition to working with all the heritage grant programs 4Culture administers, I advise a lot. I give advice on how folks can handle and interpret the histories and collections they keep—“handle” means collections management so inventorying, housing, preserving historical objects— depending on how old they are, what they are made out of, they need to be cared for in certain ways.

Your love of history and historical narrative dovetails into the curation of this exhibit though.
There is actually a practice of contemporary collecting in history museums, future-casting, that considers What do we want to be sure that we have in our institution now to be able to tell a story about what was happening during this time? An object can tell a thousand stories, so what lenses do we use to tell those stories?

What struck you about these artists in particular?
I’ve been paying attention to them because of their practices. I tend to be really attracted to art and artists who I can identify bits of historical culture, historical preservation, appreciation of culture, appreciation of historical traditions, and kind of a practice that is influenced or comes off of that. I wanted to set it up so that, yes, this is a fine art show. Appreciate the aesthetic. Love on the art. But there’s an extra layer—these artists know how to talk about the cultures that they learned from, the elders they learned from, the lands they have visited, the stories that can come from appreciating that kind of past.

I thought it was notable that the exhibit emphasizes non-verbal means of storytelling and these artists are in their twenties. I was wondering if—growing up in a highly visual, digital culture—if there’s a generational impulse to embrace some of those non-literary forms, maybe forms closer to oral history?
I do feel like working in the heritage field, I work with a lot of wonderfully seasoned people. It seems like a lot of people who are engaged in the historical preservation community have stories that they want to tell, have experiences that they want to share. And I’ve often caught myself wondering, where is the next generation? I feel like this is one way I’ve seen some young artists—artists learning of their heritage—express it. They’re using it in their art like this, rather than, say, joining a historical society.

Did you find the mixed cultural backgrounds of these artists had an impact on how the narrative was presented—a confluence of culture?
Mixed identity was not a deciding factor in choosing the artists. But I do like that especially Alex’s pieces are able to talk about contemporary realities of having a mixed heritage—in this case talking about racial stereotypes of being Black and Japanese.

With Megumi’s piece, there’s more of a straightforward tie to traditional cultural—a traditional Japanese style of quilting bee…
Alex has taken sumi painting and Megumi’s taken sashiko and they’re using them in their own contemporary ways, so when I see works like these I’m like, oh my gosh, thank you for giving this life, you know? Putting it in an art show where you might not otherwise ever think about sashiko embroidery or little Japanese ladies sitting around a fire. With Satpreet there’s this idea of borders and access—what do we have access to, what do we not? Diaspora does that to us—keeps us away from people that we love who can teach us our history, teach us to treasure our past, our traditions. She’s exploring aspects of the Punjabi diaspora and how it affects ancestral memory.

Do you feel you’re injecting any of your own history and memories in or through the work of these artists?
More than being guided by my personal background, I feel like my background in working with heritage collections really was the thing that most influenced the show. But I think that interest stems from searching for my own history and not being able to find it in traditional archives, not being able to find it in published books. Like the history of my grandmother, who was Japanese. She married my grandfather, a Black serviceman, then moved back to the United States. I never met her. I’ve tried to piece together what that journey was like and what that experience for her was like in the United States and have run up against the limitations of written history. I have found solace in oral histories and autobiographical plays which is why I value some forms of art to be able to convey historical information.

Did she leave any kind of records, writing or anything?
No, and that’s the thing about historical records and the holes they leave. I don’t know if she knew English. I don’t know if she knew how to write in English. What would she have left? So the traditional family records have not been available to me when looking into the past of my Japanese and African-American family.

I find it interesting that the audio recordings incorporated in Megumi’s and Satpreet’s installations almost have a murmuring quality to them. You can’t really hear any distinct message and it feels there’s not really a way to directly translate any of it.
I feel like a lot of the actual interpretation, what you might call the historical interpretation, is what comes out in the writing and text that accompanies the exhibit, which I wrote based on my conversations with the artists and additional research. But if I were to treat the work as a historical object, which is the type of object that I have the most experience working with in museums, I’d say that’s exactly the value of an object—the value lies in the interpretation you’re able to share about it, the stories you’re able to tell. I don’t want to say that’s the only value of an object, but that’s the most important value when you’re trying to decide what to keep in a collection, what you’re going to keep in an archive, what to put on display.

Lore Re-Imagined: Shadows of Our Ancestors is on view at Wing Luke Museum through April 14, 2019.