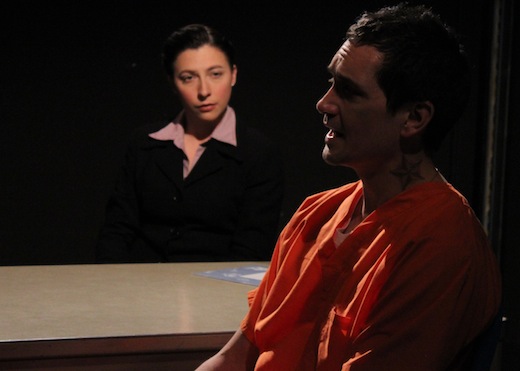 “Jesus Hopped the A Train,” the second effort by promising company Azeotrope, is a tough play. Not only difficult – which it is, not just to perform, but sometimes to watch—but resilient, full of muscle and sinew, and hard to pierce. But the effort is richly rewarded in this brilliant production.

It begins by introducing us to playwright Stephen Adly Guirgis’ abrupt and slamming alleyway language, a kind of profanity haiku that steeps the merciless night of a penitentiary. In the shadows of the prison, Guirgis confronts the seemingly simple notions of right and wrong, sin and solace, choice and redemption.

In one cage is Lucius Jenkins, a celebrity serial killer known as “The Black Plague,” who revels in the salvation he has achieved in coming to Christ. In another is Angel Cruz, a streetwise kid whose effort to right a wrong has landed him here. For one, the commission of great evil leads to his believed redemption, while the intention to commit a great good is what condemns the other.

Richard Nguyen Sloniker’s loose-limbed performance as Angel is an immersive transformation, balancing the rough mask of the street with frightened astonishment at how his desire for justice has brought it crashing down on him. His puzzled quest arouses the sympathy of his public defender (Angela DiMarco), who resolves to twist the system to free him.

Jenkins, as portrayed by Dumi, is a king of the prison catwalk, who rules by his double-notoriety for death and for piety, even convincing guards such as Charlie (Patrick Allcorn) to provide him with privileges. Through his newfound devotion to Jesus, he claims exemption for his crimes, fighting extradition to execution in Florida as well as a sentence to a fiery afterlife.

It’s in the exchanges of the two inmates, during their limited exercise time, that the work finds its depth. Lucius’ religious sanguineness, we soon see, is that of a hustler taken in by his own grift, as Angel begins to challenge his sense of righteousness.

Supervising these sessions is the prison guard Valdez, a jailhouse despot given chilling solidness by Ray Tagavilla in a stunning turn. Here, he reminds them with every growl, God wears a uniform and carries a baton, and its might that makes right.

Director Desdemona Chiang keeps an air of fraught tension, while still allowing us to reflect. Aside from the prisoners’ orange jumpsuits, the staging is awash in murk, a visual reflection of the moral muddiness being examined. Deanna L. Zibello’s minimal design is punctuated with chain, making us feel the cages of both prison and conscience.

Ultimately, “Jesus Hopped the A Train” asks insistent questions about what is truly virtuous and how one can even define, much less seek justice outside of heaven.  Like life in all its moral complexity, it offers no answers, but it offers a great deal of everything else that’s worthwhile.