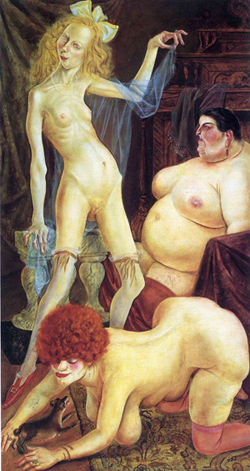 Two weekends of NW New Works at On the Boards is a lot to take in, at least for someone who doesn’t make dance her artistic bread and butter. And I only attended the evening Mainstage performances—not the studio showcases taking place each afternoon.

I find it problematic to write about movement, simply as a linguistic exercise. When I read what others have written about these performances, I’m struck by the slim selection of adjectives used, as though there were just so many words available in the toolbox to describe the visual effect of dance. Perhaps redundant language merely mirrors the nature of movement, which is physically confined to recycling the same slim selection of gestures. If that sounds disparaging, it’s not meant to be. Because within this narrow realm of language and gesture there exists a magically inexhaustible variety of nuanced expression that taps something visual art often struggles to grasp.

“What fascinates me most about this kind of work,” I said to a writer who was sitting next to me in the front row, “is how the body is used to draw evaporating lines through space. Visual art is usually concerned with making an object or gesture that in some way remains, like an artifact. But in this work, the body is simply a metronome. Time ticks away, demarcated by each movement.”

It only makes sense that there is limited language to describe such encounters. When I flip back through my notes, I come across emphatic first impressions scribbled almost illegibly in the dark: Least favorite thing in movement: male/female “struggle” dancing. I was referring to Portland-based bobbevy’s This is how we disappear, whose piece floundered for lack of anything terribly innovative, despite the striking, Amazonian good looks and studied movements of the female performer. Elsewhere, I’ve scrawled a diatribe against mimes next to a note about Heinrich von Kleist’s “On the Puppet Theater.” This is a thought to which I often return in these performances: imagining dancers trying to achieve the perfectly graceful, mechanical movements of Kleist’s marionettes. The marionettes are things unburdened by consciousness and self-doubt, who have yet, in the metaphoric parlance of Romantic philosophy, to taste the fruit of the Tree of Knowledge. Kleist’s philosophers in the essay (ironically) ponder whether it’s possible for humans to continue down the path of knowledge (there’s no return to a state of innocence, after all) and eventually reach another type of perfection, possibly articulated through a practiced aesthetic that approaches the original, lost grace of an animal or marionette. Dancers do this literally. They apply so much rigor toward taming the thick, clumsy body. They do so much to approximate the ethereal ease and weightlessness of a puppet.

One performer who did exactly this is Josh Martin, in the first weekend’s Mainstage Showcase. The curtains raised to reveal him standing solo onstage, dressed simply in jeans and a t-shirt. When a grinding, bass-heavy music started up, Martin began a nonstop, twenty minute pop and lock dance. For the duration, he moved at precisely the same rhythmic interval—the perfect metronome—his tortured body turning, torquing, writhing, writing a slow-motion fall through space. 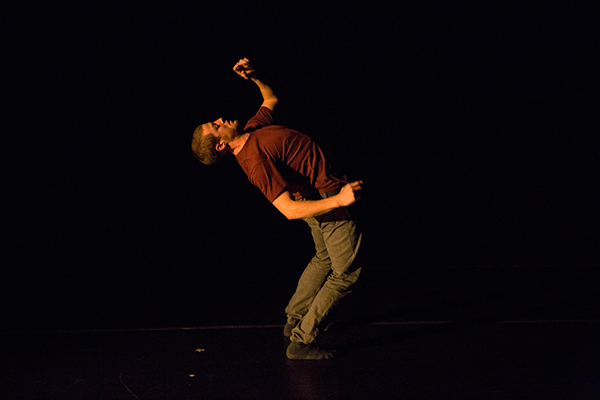 Another striking piece in the second weekend of NW New Works was The New Animals’ TRE where were you? If you were at Saint Genet’s Paradisiacal Rites, you saw New Animals’ Calie Swedberg dance for Saint Genet, and you might know Molly Sides as the founder and curator of the quarterly Trigger: New Dance Happenings at Vermillion. TRE succeeded as a high-energy memorial to a lost friend and collaborator the troupe had known while studying at Cornish. The dancers weaved in and out of hip hop-influenced solo dances while occasionally stopping and congregating to pour Black Velvet whiskey into red Solo cups. They pounded out a tattoo, an invocation, as they sometimes paused to clap and slap the dozens of plastic cups against the floor. At the end of the piece, the dancers had spread the cups out in the shape of the same Roman numeral they each had tattooed on their arms. III. Tre. 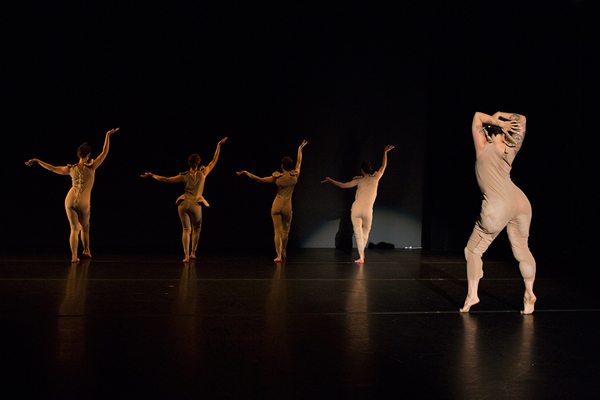 THE PEARLS
A last piece that remains fresh in the memory after the curtain falls is Allie Hankins’ Misshapen Pearl. In it, Hankins and four other performers are unveiled on a starkly lit stage. They’re in flesh-colored body stockings, which sounds sexy, except the stockings are stuffed with lumpy wads of cloth, rendering the damsels comically malformed. For some, the lumps protrude grotesquely from the hips; others have padded rumps, bulbous spines, bulging legs. Everything is fine-tuned wrongness. If that weren’t hyperbolic enough, their faces are painted with the maquillage of cabaret clowns. Cheeks are powdered and sallow, eyebrows too-thickly drawn on. They thump and spin around the stage like overzealous, geriatric seductresses, their mouths garishly grinning, bearing teeth. Hankins’ choreography is mechanical and jerky, like a nightmare version of Kleist’s puppets. They lack any grace. They perform to a crackling, Victrola-cranked cabaret tune, which adds to the whiff of mothballs and madness.

It reminded me of the madness of Weimer-era New Objectivity (Neue Sachlichkeit) artists like Otto Dix (top image) and George Grosz, who made painting after painting of gross prostitutes with clownish makeup and depicted mangled war veterans with wooden legs, caved-in faces and ill-fitting glass eyes. There is nothing beautiful about any of these war-battered subjects. Only the sadness and animality of humans shines through, along with a hint of sympathy for grotesquerie—something which is, according to the aesthetics of Dix and Grosz, a universal quality.

THE POTATOES
In other tales of irresistible attraction-repulsion, on Thursday I walked in on another of well-attended (ie. packed) exhibit at Hard L. This time the show was Sonja Peterson and Eve Cohen’s Dancing With Dummies. The two artists apparently share many common interests and friends, but had never met before Hard L curator Leigh Riibe introduced them to one another and suggested they make a show together. One of said common interests is the manufacture of grotesque, bizarre little dolls. Peterson’s pieces are the most deliciously bewildering of the two (see images below). Made of stuffed, flesh-colored hosiery, they’re more like misshapen potatoes than pearls, but are strikingly similar to Hankins’ dancers. Some have distended bellies embedded with thread-thin veins. Some are glass-eyed dolls in misshapen, hand-stitched bodysuits with little teddy bear ears, pug noses, and holes cut for mouth and eyes. Cohen’s less-lumpy sculptures could double as fetishes or voodoo dolls, like her twin burlap-wrapped figures with tiny bisque feet, attached to one another with a knitted umbilical cord. 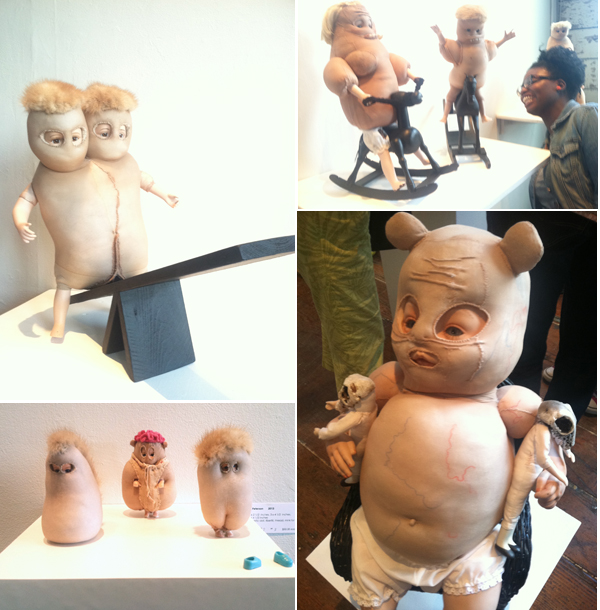 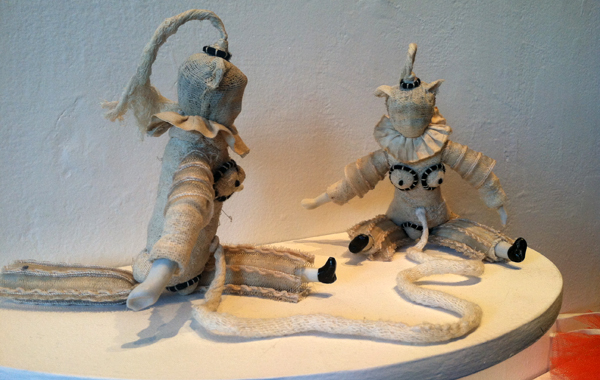 Someone at On the Boards commented that Hankins’ dance was probably about body image, acceptance and performance. Female issues. I don’t think it’s as facile as that. Nor is Dancing With Dummies. The physical grotesque is fertile for an embarrassment of meaning. For Dix, the physical grotesque, rendered as bloodshot, amped-up mannerist cartoon, works as sympathetic social commentary. For someone like Hans Bellmer, the baroquely misshapen body services anxious indulgence in abnormal desire. Coming from a queer gallery like Hard L, it might signal a celebration of “abomination” and otherness (a characteristic of Northwest art as described by Matt Offenbacher).

In any case, the grotesque is in the air. And Hard L gets continued props for showing artists who are new and exhibits that are unpredictable. 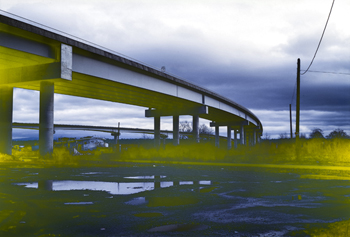 AND FINALLY, AN OVERPASS
The Capitol Hill Art Walk, celebrating its fourth birthday this past Thursday, was bursting with something for everyone. But it was at Photographic Center NW that I found the object of desire. And of course it’s not for sale. It was Dan Hawkins’ light box-illuminated photograph of the Everett Mill. The photo, tucked in a small, black closet in the exhibition space, is part of a series called The Water Project Hawkins made for his thesis exhibit. For this series, Hawkins traveled to locations around the Northwest where bodies of water, large or small, butt up against the urban environment. He photographed these sites using an 8 x 10 camera, then developed the film in water from each location. Some he developed on the spot. For others, he collected water from the site and transported it back to the darkroom.

Everett Mill #1 is a unique 16 x 20 inch print on duratrans. It shows a slice of overpass arcing through an overcast sky, disappearing into the horizon. The plate has been developed using the sludgy water visible in the photo. The result is phantasmagorical.

Ghoulish shades of emerald and yellow light up the underbelly of the road, as well as the fringe of underbrush below. It glows like a sort of urban, aural photography, where the aura is sourced in the water itself. It’s yet another way Hawkins has found to divine the essence of a place so well.

On the Boards images courtesy of Tim Summers.