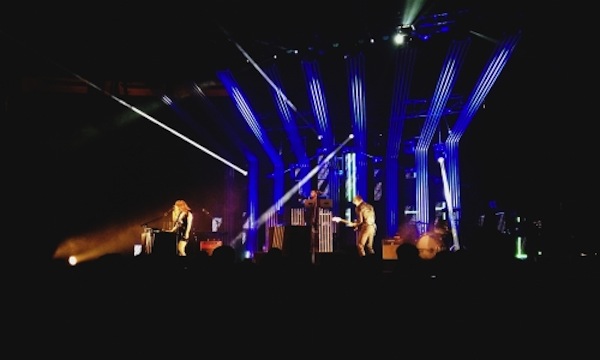 The first time I heard a song by The Postal Service on the radio I thought my heart was going to bounce right out of my bedroom window. It was the summer of 2003, I was 15 and swaddled in brutal teenage angst, but when the daytime DJ on 107.7 The End put on “Such Great Heights” I was floored. So much so that when the DJ announced the song’s name and the band behind it I grabbed a tube of lipstick out of my dresser drawer and wrote it across the top of the full-length mirror that hung from my bedroom wall. “SUCH GREAT HEIGHTS POSTAL SERVICE” remained on that mirror in waxy poppy red until my family moved across town two years later.

Last night, almost exactly ten years after the buoyant electro-pop intro notes of their hit song streamed out of the clock radio and into my pliable heart, I saw The Postal Service live for the first time.

I have other bands and albums in my lexicon of nostalgia that fit as perfectly into dusty cerebral pockets, songs that recall smells of specific summers whenever they come on in a bar, but none of them resonate quite the way that Give Up, The Postal Service’s only album, does. I’m kind of embarrassed writing this. Among my music savvy, blog-trotting, album-leak-seeking friends, Ben Gibbard, The Postal Service’s front man, is mostly a dude of the past. At 36, he remains the poster child for a brand of heartbreak falsetto indie-rock that continues to have a large and loyal fan base, but his sound is not nearly as novel as it was when his band Death Cab for Cutie rose to critical fame in the early ‘00s.

So in April, when I told my boyfriend I’d bought pre-sale tickets to see The Postal Service at Key Arena he laughed and told me I should probably find another, more enthusiastic, date. I realize now, after going to the concert with a girlfriend who also grew up in the area, not to mention thousands of other Seattleites who made the pilgrimage to Key Arena last night, that a lot of my love for The Postal Service comes from the fact that the band seems local. In truth, Gibbard, a native of Bremerton, is the only member who has ties with the area. The other half of the original line-up and the brains behind the band’s gritty electronic sound is Californian Jimmy Tamborello of the band Dntel. To me though, both now and then, Give Up’s songs sound like they exist best in the perpetual spitting rain of Seattle. It helps that Gibbard name-drops the Cascade mountain range and Puget Sound on the album, giving us Pacific Northwesterners permission to claim the band as our own.

I half expected to see a sea of apprehensive 15-year-old girls (see: me, first paragraph) when I walked through the doors of Key Arena. Instead, the crowd’s average age was between 30 and 35, there were a lot of band t-shirts, and everyone, including me, had a big, silly grin plastered on their face. To my surprise, everyone was just as excited as I was, if not more so, to live out decade-old dreams. And so, when Gibbard, Tamborello and a surprise Jenny Lewis (who sang backup vocals on Give Up and also fronts Rilo Kiley) took to the stage playing “The District Sleeps Alone Tonight” I’m pretty sure a bunch of audience members started crying. It became immediately apparent that 99.9% of the audience knew every word to every Give Up song, and everyone was going to sing along, which was fun in a, “This is embarrassing, but we’re doing it together,” sort of way.

Throughout the first three songs everything seemed in place. Gibbard showed off his gyrating two-step while swinging his guitar. Red-headed Lewis roused the crowd in her black, sparkly mini-dress while tapping a drum machine with a single drumstick. Tamborella hid, raised on a platform at the back of the stage, behind two laptops and a bunch of mixers, and resident marimba and timpani player Laura Burhenn danced while slicing her mallets through the air.

Then a song started, the words of which no one in the audience knew, and the portal to this weird collective euphoria closed. It was a new song, one of a few recent recordings included on the Give Up 10-year-anniversary re-release put out in April by Sub Pop. There was some foot tapping, but for the most part it was obvious that the audience wanted what they’d come for, the old stuff.

And most of the show was old stuff. Over the course of an hour they did play two more new songs and a cover of Beat Happening’s “Our Secret,” none of which were met with much excitement from the crowd. But as song after song of the seminal album came on people continued to sing along, enunciating emphatic “Oh Oh’s” and “Ba Ba Ba’s” in beat with Lewis and Gibbard. Surprise guest Seattle musician Jen Wood came onstage to sing the breakup duet “Nothing Better” with Gibbard, the only time they’ve ever performed the power-pop song live. In a pink dress, Wood was sassy and ecstatic, mimetically pushing Gibbard away and playing to the crowd.

The set’s final song, the one I love, “Such Great Heights,”  had the audience jumping up and down as Lewis, Wood and Gibbard harmonized onstage.

For the encore the band played Give Up favorite “Brand New Colony.” At the end of the song Gibbard and Lewis painstakingly led the crowd in singing the final lyrics, “everything will change.” For whatever reason, maybe because the background track had ceased or Gibbard couldn’t quite convey to the audience when to start singing, the ending was a cacophonous mess. I had expected this moment to transport me back to that first of musical catharsis. Instead, I felt solidly in the present: 25-years-old, seeing a band that holds up well after ten years, but can’t quite bring me to my knees.