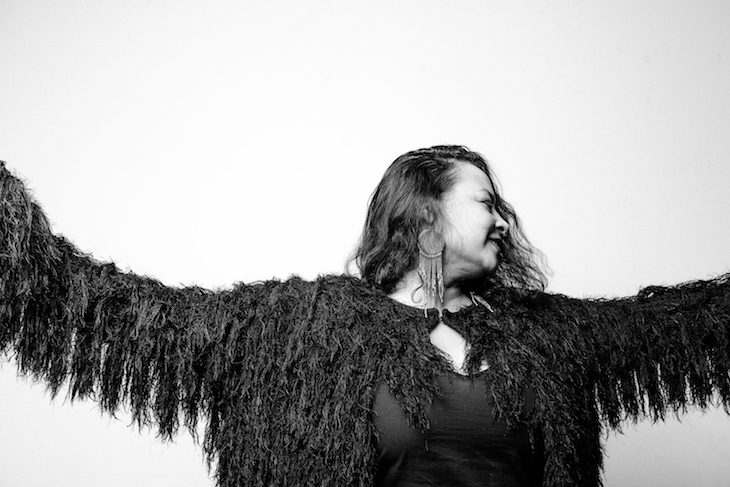 "Raven" by Zorn B. Taylor

Grand openings at museums can be fun, but rarely do they feel like actual celebrations. Not so two Saturdays ago at NAAM, when the Northwest African American Museum’s galleries buzzed with energy during the Jan. 13 opening reception for its new two-person photography show, Everyday Black. More than 850 people attended to see the popping colors and deep black and white in Jessica Rycheal’s photo prints and Zorn B. Taylor’s serene studio portraits.

“It felt like a huge family reunion full of cousins I hadn’t met yet,” Rycheal tells me during a recent visit to the museum. “That was what I wanted out of this exhibition: to have a space where people felt comfortable being their whole selves.”

“I loved watching the Black pride on display at the opening,” says artist, curator and arts administrator C. Davida Ingram, who created and curated the show with support from Leilani Lewis, an arts administrator and 2017 Mayor Arts Award winner. “It was so successful because Black pride is an antidote to white supremacy in many ways,” Ingram continues. “It functions with self love and counters oppression. The current political environment can feel oppressive at times if we do not make space to be self-determined.”

Self-determination radiates from a portrait of a woman in sonorous black and white, her strong gaze undeterred by the curls framing her brows and cheeks. Rycheal walks closer to the photo, called “Praise,” which she made in during 2016’s Brooklyn Afropunk festival. “From her beautifully dark skin complexion to her henna tattoos and distressed T-shirt that says ‘God is Dope,’ everything felt so powerful,” she says. “I wanted to go to Afropunk exactly because everyone always looked so free, so comfortable being themselves.”

Whether laughing or pensive, on the street or in the studio, lying down or spreading their arms, the people in the photos all emanate a deep trust in and with the photographers, who made the work before knowing of this show. “I try to capture how people move in the world without directing much,” Rycheal says of her conversational approach, which she describes as “taking a walk with a friend who happens to have a camera.”

For Taylor, capturing someone starts with conversation, too. When people visit him in his studio, they share coffee or tea, chat and get comfortable before getting to work. Under the lights, the camera’s gaping mouth now facing them, people usually need 10 minutes to reveal their real selves, he says. That, right then, is where the magic happens. The exact feeling of letting go of unease to unveil the real self resonates specifically in “Elisheba,” a black-and-white studio portrait of Elisheba Johnson, artist, curator and project manager at Seattle’s Office of Arts & Culture, with her eyes closed, gazing inward.

“Many photos in the exhibit show people with their eyes closed,” Taylor says. “It shows people being unselfconscious. It wasn’t necessary for them to be seen by anyone but themselves. They are who they are, complete, beyond outside labels.”

The quiet backdrop in Taylor’s studio portraits is not merely an aesthetic, but a conceptual choice. With this white background, he says, he surrounds his subjects with whiteness. He wants to question how someone can be themselves within that literal frame. Mostly, he says, he wants to affirm beauty and community. “I remember reading science-fiction novels when I was younger. Entire worlds dreamed up, but no Black or brown people in sight—they were imagining us out of existence. With my photos, I imagine ourselves in existence.”

Across the hall, the face of Kristi Brown, the chef behind That Brown Girl Cooks!, is in perfect focus, her face wrinkled into a wide smile. Next to the black-and-white portrait hangs an intensely saturated photo of chef Tarik Abdullah, which Rycheal titled “MorningStar Pop-Up.” It’s no coincidence that the portraits of the two cooks rub shoulders here. “Tarik is the center point of [my] community,” explains Rycheal, who moved to Seattle four years ago from Georgia. Meeting Abdullah and helping branding his Morning Star pop-up breakfast series was a pivotal moment in her finding community in the city.

“Many people in the photos know each other,” Taylor says. “And although the work was conceived of individually, before the show started to materialize, it’s so interconnected.”

“Ultimately, we’re both getting at the same thing: community” says Rycheal. “It’s about how Black and brown folks interact with the world outside.”

Lewis nods. “It’s a meditation on the myriad ways to be Black,” she says. “We’re showing that there’s really no one way. The only consistent thing is brilliance. We’re reflective, out-there, mixed, queer, of different gender identities, free… I could go on. We hold many things.”

Lewis, who has worked for NAAM in the past and recently became a board member, sees Everyday Black as a prime example of the museum’s role in the community as it celebrates its 10-year anniversary with a new executive director, LaNesha DeBardelaben.

“It’s a space where people can come in with all of their Black identity, their intersectionality,” Lewis says. “We don’t have many spaces like that in Seattle, and nobody is creating them for us. We’re creating them here. And Jessica and Zorn are creating it in their photos.”