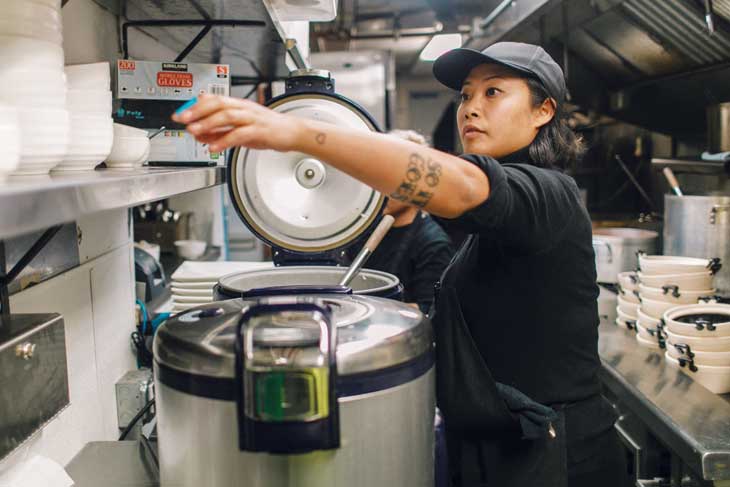 Crowded onto a couch in the South Seattle apartment of photographer Jordan Nicholson, the team behind No Cookbooks Allowed faces a problem: There’s only one shot glass. The team is gathered to film a conversation about their ambitious quarterly food pop-up, and they’re a little nervous. “We’re all family,” says Melissa Miranda, the chef/founder of Musang monthly Filipino pop-up brunches. She downs a quick Jameson and passes the glass on to Guitar Srisuthiamorn, a chef and owner of Capitol Hill Thai restaurant Sugar Hill. Next up is Alan Vu, then Francheska Songheng, both of nightlife and marketing company Resident Media, the third No Cookbooks collaborator. Time to talk.

Every installment of No Cookbooks Allowed focuses on a chef who is a community elder. To start, everyone goes grocery shopping together, to see exactly where these cooks shop, what they buy, how they choose their fish, etc. Back at the chef’s home, the team gathers to watch, learn and help as the chef prepares their long-ingrained recipes, which No Cookbooks Allowed then recreates at a pop-up.

With “freelance film and food ninja” Kristina Capulong behind the video camera, they reflect back on their November debut, which was Vietnamese, and hype their second installment, Southern Thai, coming to Sugar Hill on May 7. As they talk, the group drools over descriptions of pork belly-clam dip, of fresh kaffir lime leaf ribbons on a turmeric pork curry, of pickled pigs’ ears, of pure palm sugar and herbs brought back from Thailand. “You can buy them here, but they taste different—the sun’s not the same, the water’s not the same,” Srisuthiamorn says.

Songheng shares memories of preparing her sinigang, a Filipino sour-savory stew, for family in the Philippines. Miranda remembers being bribed by her dad to go fishing as a little girl, then hunkering in their Kent kitchen with him and perfecting sarciado, fried perch with a tricky tomato-egg-garlic sauce. Almost everyone here has a Top Ramen story.

These three had long been looking for a way to combine their skills, but how to set yourself apart in a city full of food? Vu and Srisuthiamorn were eating at popular Vietnamese fusion restaurant Stateside when it clicked. Vu was reminiscing about the incredible cooking of an old friend’s mom. “I used to go over there and eat all the time when we were kids, right out of college,” Vu says. “It’s probably some of the best Vietnamese food I’ve ever had. And I was like, I miss her pho, I miss eating there in that place. And it came together: What if we did something that featured her food. Let’s just start with her!”

“I’ve always just called her Cô, Auntie,” Vu says, laughing. But her name is Hanh Thi Tran, and last November she was the featured chef for No Cookbooks Allowed, Volume 1.

“She had no idea what she was getting into,” Miranda says. “She walked into the store and there were like six of us with our phones and cameras and notebooks following her around, and she doesn’t speak English and Alan was translating. It was a Vietnamese store and I wasn’t familiar with a lot of the ingredients; it was such an education.”

Shopping complete, everyone went home for the test cook, watching and assisting, absorbing unfamiliar techniques and unexpected tricks. Then, after hours of cooking, everyone sat down together to eat.

“We were all sitting there like, how are we here?” Miranda says. “We are so grateful we’re all at a table, eating together, breaking bread. This is what we’re all working toward. This is what we should be working toward.” Together, the No Cookbooks Allowed team is trying to build something warm, welcoming, real and fun in a city that feels increasingly like it’s slipping away. That home-cooked experience is what they create at their pop-up, where everyone eats family style.

If you track local food trends, you’ve no doubt heard Miranda’s name. The PNW-bred, Italian-trained and New York-experienced chef (who earlier this year was part of a team that brought Filipino food to the James Beard House) has worked locally at Cuoco, Bar Sajor and London Plane. But she’s best known for her Filipino pop-up brunches, Musang, held monthly at Beacon Hill’s Bar del Corso, where she also works.

When Miranda first moved home to the Northwest two years ago, the shock was almost unbearable. “Nothing was familiar, there was no more culture,” Miranda says. “And whatever culture that was there was really…” she shrugs her shoulders. “I remember driving down MLK the first time and being like, Where the fuck am I? It was really hard.”

She pulled herself out of that funk by reconnecting with old friends. She started doing Italian pop-ups at Fat’s Chicken and Waffles, owned by her old friend Marcus Lalario. Those pop-ups led to Musang, where not long ago I dove into a multi-course meal of unpretentious, unfamiliar, supremely comforting food—arroz caldo criss-crossed with poached chicken, sharply savory salted egg, coconut and corn ice cream. It was all dished out in an atmosphere that’s hard to describe, that both Musang and No Cookbooks Allowed cultivate. Chill, easy, energized—precious before precious became a dig, an indicator that caring too much is lame. But it feels precious, something to be cared for.

The star chef of No Cookbooks Allowed Volume 2 is Somsri Suthi, who is Srisuthiamorn’s aunt. “We choose a lot of dishes that you probably can’t find in restaurants,” Srisuthiamorn says. At the May 7 event, Miranda and her team will cook up Suthi’s curried Dungeness crab, spicy pork turmeric curry, pomelo salad, spare ribs and more. Be warned: It may be spicy. “What was her quote?” Srisuthiamorn asks the team. “If you can’t eat Southern Thai, go north.”

“I like to think I eat a lot of Thai food,” Songheng says. “But I sat at this dinner and there were all these dishes I’d never tried before, and I was like, this is amazing, this is real. Those recipes, made generation after generation…man, that’ll just knock you off your feet.”

Where will No Cookbooks go next? “It happens to be Asian now because we’re Asian and that’s what our closest connections are,” Vu says. “But I think as we go on, you know, we’re also exposed to great Italian cooking, to great Czech cooking…