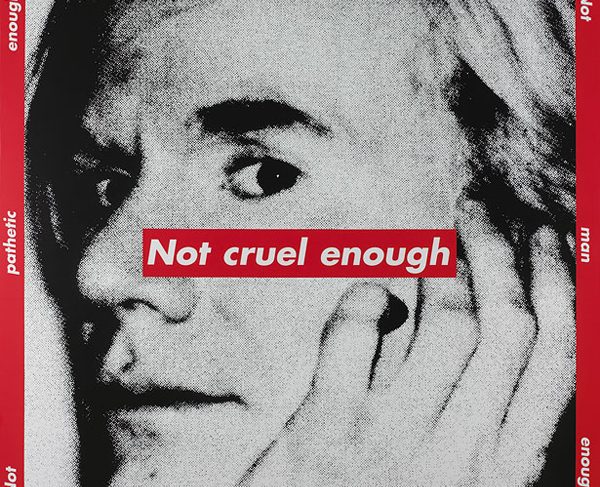 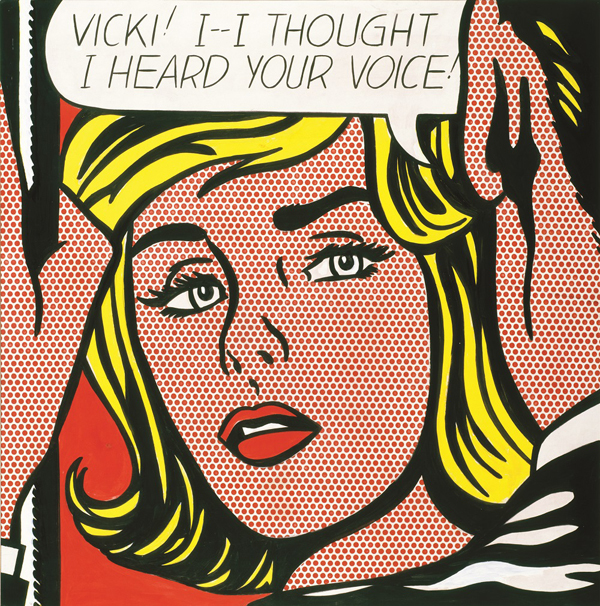 The Pop Departures exhibit at Seattle Art Museum is supposed to teach us something: That Pop Art is more than a historical moment. That pop has its tendrils deep in the present. That it’s mutated over the years, but its methods of critiquing things like celebrity and consumerism are still alive and well.

As soon as I arrived at the exhibit, a security guard edged up to me.

“What do you think? What’s your favorite thing in here?” he asked.

I’m in a room surrounded by colorful Roy Lichtensteins—the classic, half-tone, comic strip girls with yellow hair, histrionically weeping or haloed in thought bubbles. On the floor are heaps of John Chamberlain sculptures twisted from metal car scraps. Knotted, clumped like aluminum piles of guts, they seem lugubrious next to the Lichtensteins.

“I’ll let you know,” I replied. “What about you?” He furrowed his brow and shrugged.

As I took my time winding through the museum’s upper galleries, surrounded by blockbuster artworks straight out of an art history book, I think I understood what he meant.

The second room of the exhibit is filled with Andy Warhol screen prints from the ’70s and Claes Oldenburg’s oversize sculptures of everyday things. It feels sterile, despite the electric-colored Monroes and an Oldenburg sculpture that moves. Inflating Ice Bag—Scale B is plopped down in the center of the room, breathing like a struggling iron lung. It twists, loudly and slowly seizing up into a disc, followed by a slow release. Next to it, a cast resin baked potato bursting with glossy faux sour cream sits on a china dish. A giant wedge of pecan pie made of muslin and plaster gushes on the floor. The slice is slathered in dripping brown, orange and white enamel pie-filling goo.

Oldenburg’s objets are delightful, scattered amongst other luminaries of the pop canon—a handful of Warhols (his white-on-white diptych of Mona Lisa, tucked in a corner of the museum, dissolves ethereally, mysteriously) and Robert Indiana’s scintillating The Electric EAT. But one of the nice surprises in the exhibit is a trio of lithographs made by the artist during this period. They are renderings of gigantic, site-specific sculptures that never saw the light of day. Which is unfortunate. His Proposal for a Colossal Structure in the Form of a Sink Faucet for Lake Union, Seattle, sketched in 1972, would have made a nice addition. Next to that is a Proposal for a Feasible Monument in the Form of Melting Butter, which would also have looked nice melting its way down the grassy slope of Gasworks. Le sigh.

Forget potatoes and pie and melting butter. The next leg in our tour de pop is all about sex. The breasts in the next room are fantastic. Mel Ramos’ pin-up girls, painted voluptuously against Coca-Cola advertisements, share a room with Tom Wesselmann’s erotic masterpiece Great American Nude No. 66. The nude’s nipples are as large as your head and round as gumdrops, perched like little hats atop breasts crisscrossed with tan lines. Jeff Koons’ semi-pornographic, porcelain Pink Panther provides more candy-coated tit (Jayne Mansfield’s). It’s perched near the equally glossy St. John the Baptist—a slightly larger-than-life bust of the saint beatifically clasping swine in his arms. Koons’ Baptist usually lives downstairs as part of SAM’s permanent collection, and it’s nice to see it in its proper milieu of oversexed sheen. 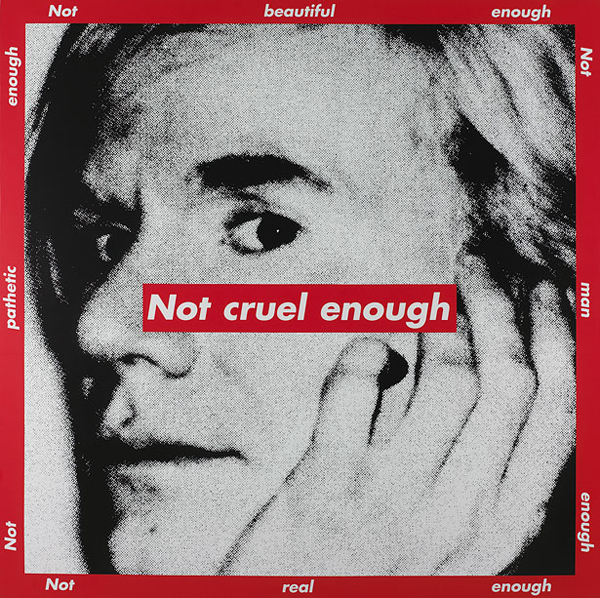 As we push toward the art historical present, we cross paths with Barbara Kruger’s acerbic finger-pointing (which points back to the ever-looming, pop deity himself), past some gemlike drawings by Raymond Pettibon (“It could have been cotton candy for all its spinning” he opines about an inky planet whipping out of control). Beyond this, we’re offered Josephine Meckseper’s American Mall, made in 2010. Mall is a diorama of a shop window, a jab at consumerism and the art market in one swoop. An Artforum magazine is in a plexi vitrine next to sundries like nylons and sunglasses neatly organized on displays. The backdrop is made of panels of mirrored plexiglass, the colors of which are red, white and blue. The viewer’s reflection is captured in the piece, distorted ever so gently, like a funhouse mirror. 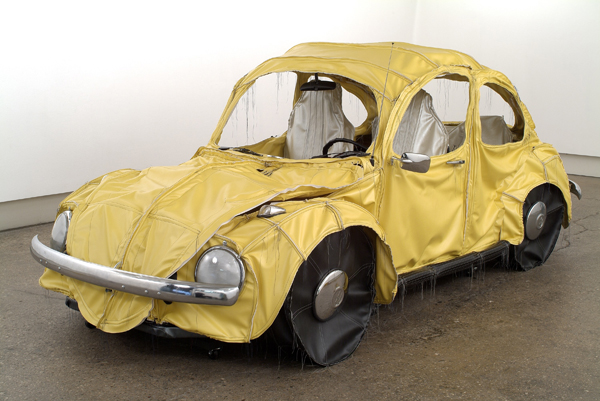 It’s chillingly didactic next to Mexican-born Margarita Cabrera’s soft sculptures of kitchen appliances: a food processor, a slow cooker and handheld mixer. In each, the glossy, plastic parts have been replaced by squishy, orange vinyl fabric stitched together with turquoise thread that spills out in a hairy excess of untrimmed fringe. At the center of the room, Cabrera has worked a similar alchemy on a life-size VW Beetle, which slumps on its frame, trailing threads.

What should have capped the exhibit—a multi-channel video by tweaky, frenetic, YouTube queen Ryan Trecartin that probably would have been the most life-injecting piece and a nice terminus for the pop timeline—was missing. The display for the piece was walled off due to a structural issue (a leak, according to the guard).

At the end of the exhibit there’s one stab at visitor participation in the form of a digital photo booth where you can snap a set of photos that automatically gets the Andy Warhol screenprint filter—something you’ve been able to do on your desktop forever—or a Lichtenstein treatment.

It captures what’s off about this exhibit: The pieces that comprise it have the unfortunate gravitas of dinosaurs, static and melancholy. It reads like a textbook, albeit one sprinkled with diamonds. The energy of Pop dissipates as the exhibit progresses and its critical potency feels increasingly academic and gloomy—a disconnect from contemporary culture’s unrepentant and feverish indulgence in instant gratification, information and the opiate of a bazillion images a day at our fingertips. (Trecartin would assumedly have made at least an effort in bridging Warhol’s 15 minutes of fame to the age of Selfie and Instagram fame.)

Fortunately, another exhibit at SAM feels like the last chapter Pop Departures searches. City Dwellers: Contemporary Art from India opened a few months ago. A collection of contemporary photography and sculpture, it’s a hyperactive glut of imagery and objects that attempt to contextualize the identity of a people caught between the poles of poverty and decadence, between a long history of political engagement and the lure of complacency made easy by cheap entertainment and technology. Debanjan Roy’s life-size India Shinin V (Gandhi with iPod) is pop’s real contemporary poster child. The fiberglass statue of Gandhi is painted red (in a candy-apple automotive paint) and gripping a white iPod in his hand. He’s head-down, buried in his music. 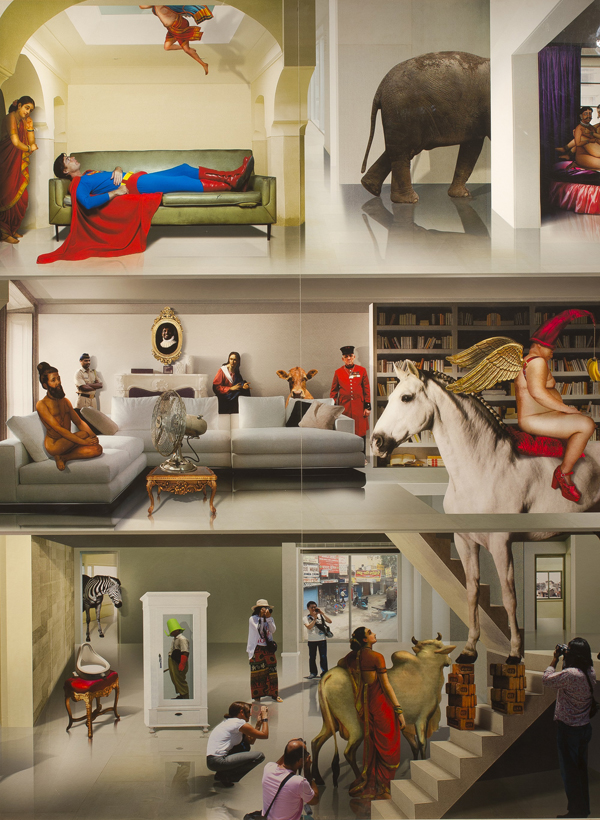 Manjunath Kamath’s Overdose leaves nary a pop stone unturned in his huge photo triptych, which demands to be seen in person. The photomontage swarms with figures, as febrile as Bosch’s Garden of Earthly Delights. The setting is a luxury home filled with everything from Lego men to white stallions. Superman gazes pensively out a skylight. A woman dressed smartly in heels, nylons and a clip-on tie is blow drying a burro. Picasso is ready with a gun and Jesus leans against a table, gazing at a dancing ASIMO robot. Everything iconic lives under one roof. The madness is total but unshocking. The dose is just right. If pop has an afterlife, this is it.