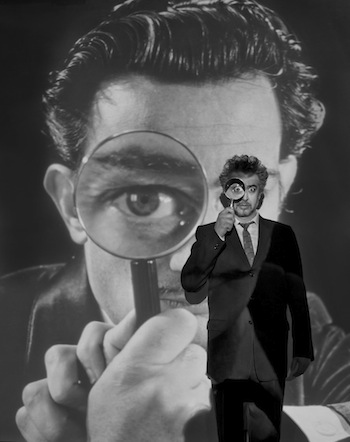 The Final Tribunal into the Mysterious Death of Mister Señor Salvador Dalí began as a title jotted down by playwright Brendan Healy while perusing a Dali exhibition in Melbourne, Australia. Two and a half years later, The Final Tribunal has been developed into Pony World Theatre’s third full-length original production that follows the investigation of a nameless detective into the circumstances surrounding Dali’s death. In a narrative broken up by case reports and art lectures, the realities of the investigator’s world start to melt around him as he develops a romance with an art historian played by Heather Persinger.

Backstage at the Theatre Off Jackson, Healy and Persinger sat down to talk about love, eccentricity, painting jellyfish, and whether all that’s left of Dalí’s surrealism is a societal obsession with randomness and mustachioed merchandise.

Did the play that you ended up creating surprise you?

BH: It started off looking at works of Dalí and his writings trying to see what was of the most interest and at some point that shifted to pulling parts of his biography out to tell a story that is more universal than you expect. He’s such an eccentric that I don’t think one goes into a play about Dalí expecting to find something that’s common to us all but I think that’s what the play ended up trying to find in the end.

One of our barometers, or guidelines, was a quote from Salvador Dalí that is essentially “If you want to paint a jellyfish you have to paint a harlequin playing the mandolin.” To get at the true essence of something you shouldn’t paint that thing you should paint something else that creates an association. The story we start off with is the harlequin with the guitar and what we hope we end up with is the jellyfish.

Did any particular themes emerge?

BH: What is fact and what is fiction because with Dalí that’s always the question. His writings, his performances, his antics, his whole persona. Where did the line stop between contrived and sincere? Was he just a really good salesman versus a good artist?

HP: I think there’s a theme of facing death through the lens of a loved one. Dalí and [his wife] Gala had such an intense relationship. They were one. I think this play is a lot about death and we each have to die and face that but it’s not just about our own death it’s about facing losing someone you love or leaving someone behind and the unfairness of that.

Does that intensity come from it being such a creative relationship?

HP: I don’t know that that’s necessary. I think that sometimes people find each other and they don’t have to be artists or be crazy. His passion for Gala and his commitment and devotion to her and to them as a couple is fascinating to me. There’s nothing sexist or unhealthy about it.

BH: It’s interesting because in some ways he was an incredible sexist pig. He said “No woman can be a good artist. It’s impossible for women to be good artists.” But then his relationship to his wife was very much an artistic partnership. There’s this little short film that he did where it’s him and Gala being reborn together. They’re in this giant egg and they’re on the beach and they break open the egg and he’s throwing red paint that’s supposed to look like blood on the beach and he gets out cartons of milk and he squirts them everywhere and he’s talking about “This is the milk of Gala, this is the blood of Dalí.”

How would you define surrealism?

HP: Combining the unconscious with the everyday world to create a more perfect reality. What Brendan has done with this show is capture an essence of surrealism that I can relate to without falling into the trap of just being ridiculous.

BH: Random associations—putting two things together to create a new experience. What first comes to mind as an example is Dalí’s sculpture of the lobster telephone where he replaced the receiver with a lobster.

BH: I don’t think it’s that much alive anymore. It served a very particular purpose when it came out because it was struggling against convention. In today’s society everybody is against convention so the idea of being surreal right now really doesn’t exist anymore. It’s ubiquitous. How much of the Internet is just really trying to be random.

Randomness has kind of replaced surrealism, which was an almost calculated randomness.

BH: As opposed to ironic randomness. Or post-ironic randomness. If you really want to see a truly surreal play you’re better off going to some of the worst performance art out there which will probably come much closer to the true benchmarks of surrealism. For us we wanted to use surrealism but we didn’t want to lose the task of telling a story that the audience could have an emotional connection to. And those are not easy things to do at the same time because if you look at the paintings or the movies of surrealism or the poetry of [André] Breton it doesn’t really invite narrative it sort of rejects it. We were pushing two things together that wouldn’t normally fit together.

One of the interesting things about Dalí and surrealism as it relates to today is it’s a good reminder that we’re not original. Nothing we do that we think is really creative or out there or totally unexpected—it’s been done by these people. And that relates to their lives as well as their art.

What do you think Dalí would think of the play?

BH: He’d probably say it’s too conventional. To meet his expectations you’d have to outdo Dalí. Or maybe he’d like it because we didn’t beat him.

HP: I think he’d like that it’s about Dalí.

Pony World‘s The Final Tribunal into the Mysterious Death of Mister Señor Salvador Dalí runs April 11—May 4 at Theatre Off Jackson.