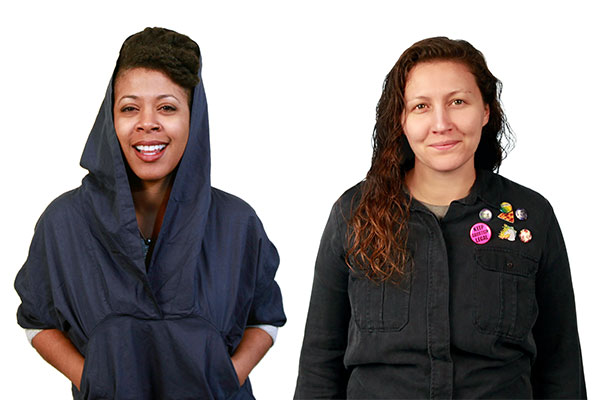 No matter what corners of the Seattle performance world you frequent, you’ve almost certainly encountered the work of HATLO and Shontina Vernon. Both work often in the theatre, but they’re not limited by the stage by any means.

HATLO, one half of experimental dance-theatre performance duo PE|Mo, is also a directorial engine behind everything from Courtney Meaker’s feminist play that’swhatshesaid about the dearth of female roles in modern theatre to Markeith Wiley’s dance-theatre-comedy-hybrid It’s Not Too Late and now New Century Theatre Company’s Bright Half-Life, to name just a few.

Playwright/actress/musician/activist Shontina Vernon splits her time on-stage and off—you may have seen her in Intiman’s stellar production of Alice Childress’ Trouble in Mind or spied her name on the list of playwright finalists for Seattle Public Theater’s newly-launched Emerald Prize. She’s the founder of the Common Ground Music Project, which forges cross-cultural connections through art, with which she and 11 other Seattle artists of color traveled to Cuba last year.

Both HATLO and Vernon were raised in very religious families, and both identify as queer and work in social justice. Their early, post-election conversations naturally turned toward survival. “How do we get through this time?” HATLO says. “We talked a lot about how we survived growing up the way that we did, as queer folks, and also how this moment feels like a difficult moment for white folks and black folks to be organizing across difference, which is important but challenging work.”

“It’s an homage to the fact that we feel like the thing about us that was described as ‘an abomination’ was the very thing that saved us,” Vernon says.

Pulling inspiration from their shared backgrounds, as well as feminist poets and fierce friends Audre Lorde and Adrienne Rich, HATLO and Vernon are creating a queer spiritual practice, which Vernon describes as “at the intersection of ritual and performance.” Meditative and interactive, the piece will be structured as an appropriation of church as it resonates for them—they’ll appropriate what’s positive about spirituality, and invite others to join in the ritual.

“Audre Lorde has this quote about how our silences don’t protect us, and in fact those silences can wedge even more distance between us,” Vernon says. “So we’re really looking at those things that we don’t say out loud, as a way to not just begin conversation but to see where we can join forces.”

“It will honor and center queer women of color elders, and queer women poets that are elders,” HATLO says. “The practice is going to be centered in surviving in this moment, looking to the wisdom of those elders who survived what they went through. They survived Reagan and Bush, so we’re gonna utilize some of their wisdom to create new wisdom and look to the future together.”