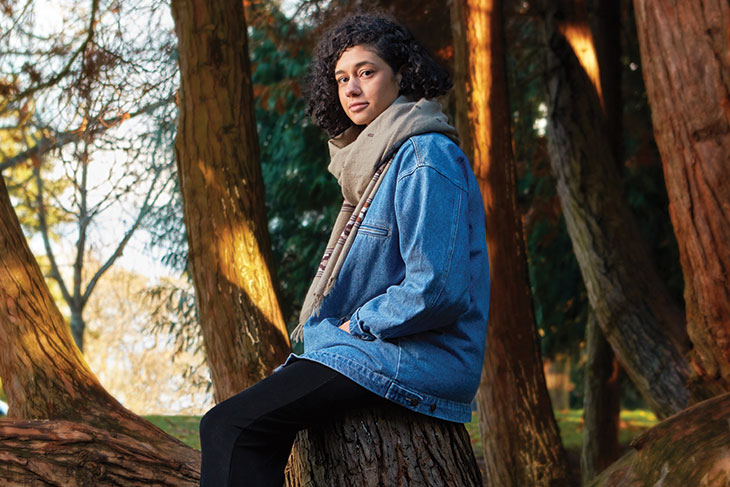 In the high heat of summer 2014, a hundred-odd people crowded into a Georgetown house for a backyard fundraising party hosted by Men’s Rights Club, a satirical feminist organization. Among the art installations and performers, Leena Joshi steeled herself for a step into uncharted territory: Suddenly her image filled the projection screen behind her, and her digital self and physical self performed poetry together.

“[That] was the first time I ever did the video poetry thing—interacting with myself, essentially,” Joshi says, sitting in the crowded, velvet painting-filled coziness of Twilight Exit. Joshi had long resisted sharing her art, inhibited by her self-perceived lack of mastery. But that performance triggered a seismic shift within her, ushering in a period of time she alternately refers to as a “threshold,” “awakening” and “epiphany.”

“I realized I didn’t need to do one thing; I could do all the things,” she says.

Do all the things is now her credo. Along with her drawing, video, poetry, photography, songwriting and T-shirt-printing pursuits, Joshi plays drums in tender-hearted garage-rock outfits Hoop and Sick Sad World and collaborates with video production group Woedette and homespun theatre company Marvelous Good Fortune. Her many projects are unified by an earnest approach that consistently produces emotive, vulnerable work.

“It’s a poor excuse to want the caliber of my work to be so high that I don’t let anyone see it,” she says. “I might as well start putting it out now, because I feel this way now. This feeling will pass and when this feeling passes it will no longer serve as inspiration.”

With the “video poetry thing,” Joshi performs alongside a projection of gauzy, dreamlike video, sometimes superimposed with the text of her self-reflective poetry. The videos are crucial to her performances but also function as poignant, standalone vignettes. They explore private worlds, often featuring the five female artists with whom she lives, their home—affectionately called the Womb Room—and everyday ephemera like vegetables and screen captures. Peering into a messy constellation of thoughts, signs and emotions, the viewer goes almost out of body; the experience is tender and intimate yet voyeuristic. Joshi’s videos inspire nostalgia for a past that never happened.

“It’s really identity-based, it’s informal in a lot of ways,” she says. “It’s influenced by digital culture, pouring a lot of the way you feel into tech things.”

As a woman of color, Joshi says her art is often tokenized, categorized as “feminist” or “brown-girl art.” She considers herself a feminist and wants to see greater representation for people of color in the arts, but also believes she’s “just a person making shit.”

“Maybe we haven’t reached a point yet where we can look at art made by any kind of person and view it as Art, capital A, without any hyphens attached to it,” she says. “I think it’s just a question of empathy, which is all I really want. Like, Can you understand what I’m feeling right now?”