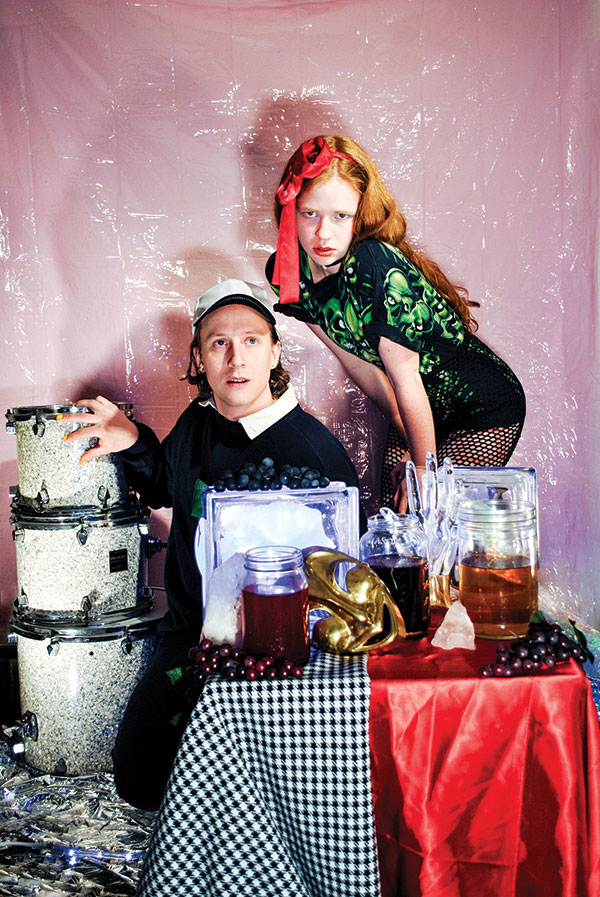 As heard on a handful of addictive singles the band’s released in the last year, Pleather songs start almost as individual pieces of unrelated noise that slowly form into a beat, building drum loops, guitar samples and midi keyboard melodies into minimalist anthems. Nelson, with the voice of a frustrated human unsure of what’s actually going on in the world, belts out lyrics like, “We are living within the confines of our selfishness, painfully watching as the typing bubbles disappear,” from the song “Love in Lust’s Cup.” Together it’s the sound of an overstimulated brain toggling between browser tabs.

If Pleather is trying to make sense of this current cultural moment, they’re doing so by evolving from the recent past. A few years ago, Nelson and McKibben were heavily involved in the tight-knit indie/punk scene that centered around Couple Skate Records (which McKibben helped run), all-ages concerts at Cairo Gallery and the annual summer Vibrations Festival at Volunteer Park. Over time, relationships ended, friends moved away, bands broke up, Cairo closed and the whole experience left them both feeling burnt out and ready to evolve.

“By the end of it I was like, I never want to make this kind of music again. I never want to see these people again,” Nelson says. “And not only that, but I want to get out my catharsis for what happened through music. Luckily for me, Andrew was feeling similarly and we were living together at the time. We had a lot of shared experience of sadness and heartbreak, and I think a lot of that went into making Pleather.”

“I had just gotten back from a long tour and played so many shows across the country with really kinda lame bands,” McKibben says. “This group came from wanting to do something that wasn’t as much a rock band, and push where we could be creatively.”

With no luck shopping the finished record to labels, Nelson and McKibben decided to stick to their roots and split the full-length into two EPs. The first, Tether, comes out this month on Oakland cassette label Smoking Room, featuring five unreleased songs—a concentrated dose of Pleather. The remaining tracks will be released as Feather in more of a mixtape format with demos, oddities and remixes.

“The hope is that by retaining control of our music we’ll be able to structure our involvement in the music industry exactly how we want it, trying to create a career for ourselves instead of hoping the music industry will create one for us,” McKibben says.

In the meantime, the band’s been staying selectively active on the live circuit, playing a Valentine’s Day benefit for Safe Night Access Project Seattle (a sex worker-led peer outreach program) at a roller rink and a “trans insurrectionist dance party” at an anarchist bookstore. Both events—unconventional, aligned with marginalized causes, shamelessly fun—rightly reflect Pleather’s outsider ethos.

“There are a lot of ways to exist as a band other than holding your breath waiting for someone to sign you,” McKibben says. “[Ours is] a sound that maybe people don’t know what to do with.”