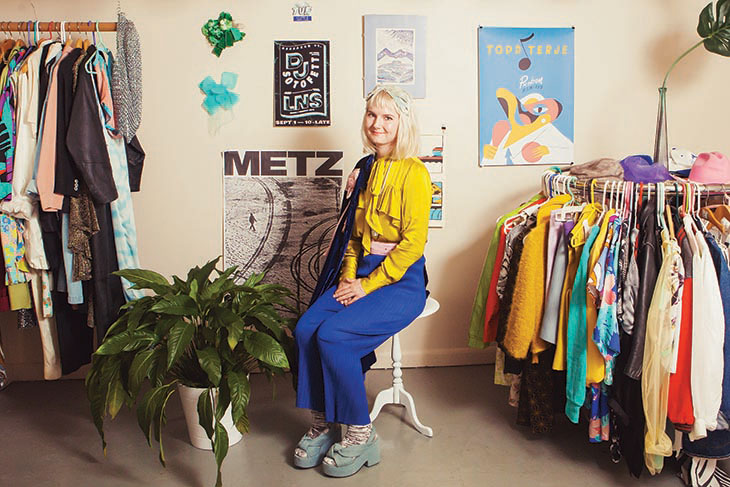 WHO Isabel Von Der Ahe, the 27-year-old freelance graphic designer and occasional DJ who spins house music and organizes shows through TUF, a Seattle-based female, trans and non-binary music-based collective that showcases femme talent. Von Der Ahe was born and raised in the Northwest and found her way to design through a desire to cultivate an avant-garde, DIY and playful punk aesthetic in the dance-music community. She taught herself illustration and has produced graphics, flyers and, most recently, clothes.

THE LOOK “I’m a bit of a style chameleon from day to day. Lately I’ve been wearing a chainmail hood that I ‘knitted’ to look like a Cleopatra wig. Half of my wardrobe is thrifted, largely from the posh ’90s businesswoman section of Goodwill. The other half comes from small labels around the world. I think prioritizing quality natural-fiber fabrics and avoiding fast fashion are essential to cultivating a strong personal style.”

ICONS “Both Barbie and Ken’s various outfits from the ’60s through the ’90s are my primary source of inspiration. I admire Grace Jones for her playful androgyny and fierce headwear. I’m most envious of Princess Di’s wardrobe of matching wool suits. My PNW style hero is local stunner Dritta Bernstein.”

UP NEXT Von Der Ahe is launching a line of apparel this winter (isabelvonderahe.com). On Nov. 11 she’s helping to produce a night of music at Kremwerk featuring Berlin’s Objekt and a live set from 214. Next year she’s headed to Berlin to study communication design. As she preps for her voyage across the pond, she’s giving away most of her current wardrobe. “I’m only taking what I can carry,” she says. “I’d like to get used to owning very little for once. I’m looking forward to a fresh start.”