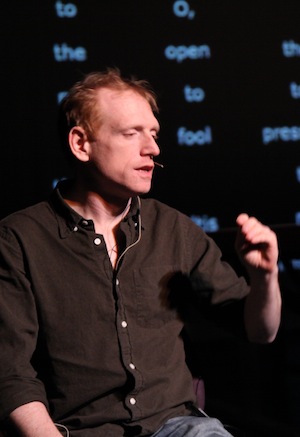 Annie Dorsen and a team of programmers and designers may be credited as the artists behind A Piece of Work, but the production has one main creative director—and it’s a computer program. A Piece of Work (formerly False Peach), premiering this weekend at On the Boards, is Dorsen’s second experiment in “algorithmic theatre,” a term she invented to describe her work using computer software to generate the essential elements of a theatrical production.

In other words, Dorsen’s team writes the program and the program writes the play—in this case, an original version of Hamlet created nightly by running Shakespeare’s text through algorithmic code. Each show’s varying length is based on word count, and live actor Scott Shepherd will be hooked up to the “Hamlet machine” receiving lines via text feed. Dorsen explains why the only thing more human than theatre might be technology.

In a recent interview you asked, “Can theatre be ready-made? Can theatre be objectified?” Is this show an attempt to answer those questions?
It is and a lot of my work is playing around with that idea. Can you think of theatre as a material that you can use like clay or paint or sound? Can you manipulate the essence of theatricality? I use the term algorithmic theatre to distinguish it from multimedia performance or digital performance where the use of new technologies tends to be to make cool decoration. We’re trying to construct them so that they are fundamental creative partners with the human artists.

Some of the things that become interesting are is there an inherent dramaturgy to an algorithm? How does an algorithm order the world? We’ve been trying to create theatre that relies on an inherent algorithmic logic, which might mean it’s a flow of data rather than an arc development of a story. These kinds of pieces tend to have a beginning and an end but there isn’t the same kind of development or structural signposts that we’re used to seeing in human-made theatre.

What affect does that have on the audience?
The spectator has a sense of being very necessary to the piece in a way where the performance can’t really sell itself. It does present language and ideas and effects and music and it gets very emotional, but my guess is that the human audience feels very implicated. Part of the meaning or the narrative might arise because the human brain watching the piece puts things together. It’s not an hour of randomness. It’s an hour of patterns and games with theatrical structure.

What are your general feelings about technology?
I was just reading the other day that 90 percent of the data in the world was created in the past two years. That’s an incredible change in what knowledge is. Algorithms are everywhere. Our lives, our decisions, our social interactions, our political activity, everything is becoming data that algorithms use. I think it’s crucial that those of us who are not computer scientists start to understand how these things function.

Up until a few years ago I was mostly playing with interface and I didn’t understand that the real stuff is happening at another level of the system. That’s what I’d really like to try to play with—expose the functioning or make some provocative work that gets people thinking and breaks down the fear. There’s a lot of artwork that technology is kind of futuristic or Sci-Fi or alien, but I think it’s everywhere. This is the future. We’re in it.

Could you create an algorithmic theatre piece based on a person’s personal data?
You totally could. This is where I think theatre and computer science have something to say to each other. There’s a tradition of digital art in the visual art field and in scenic design and in music composition, but there’s something about theatre that is so human. It’s really about trying to represent what life is like, what are the things that define a human in a given place and time. That’s why I wanted to work with Hamlet, because it’s the ultimate play about what to means to be a human. I think humans these days are partly algorithmic.

True. Just think how much time people can spend messing around with Siri.
Since the very beginning of Chatbots in the ‘60s there was what they called the Eliza affect—that people would respond to Chatbots like they were people. I think we can’t help it, we have a responsiveness to language and to being addressed by another being. We’re willing and even eager to extend ourselves into our machines emotionally.

One of the other things I’ve been very interested in this piece is that the set and the light and the music are responding to the text automatically. I find it really beautiful to watch the inanimate objects on stage doing things. We’re used to thinking that a stage is a place for people to be and it’s interesting to see what happens to a stage when the people are gone.

How Hamlet-y does the show end up being?
It’s pretty Hamlet-y. When the algorithm starts parsing language and finding different patterns you get something like a very distilled essence of the play. And this is may be due to the brilliance of Shakespeare, but the images, the grammar, the sounds that are called for, the emotional spaces you find yourself in, every little bit is Hamlet. Even when you recombine it and scramble it. Sometimes a character will get the words that are normally spoken by another character. It starts to open up some alternate realities.