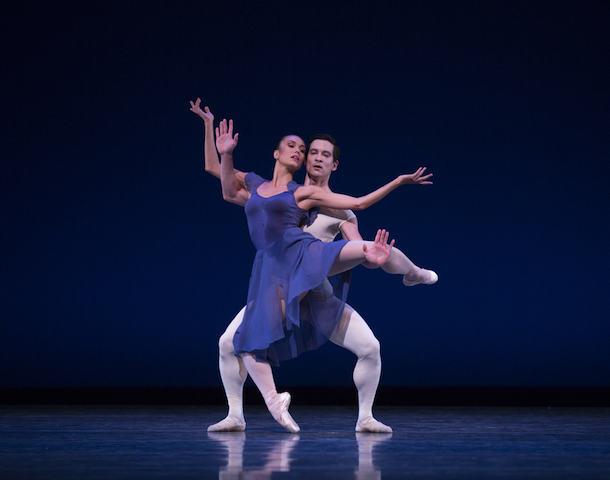 Closing out Pacific Northwest Ballet’s 2017-18 season, Pictures at an Exhibition brings together three works, all PNB premieres, from three of the most prolific male choreographers of the 20th century. While Jerome Robbins’ Opus 19/The Dreamer stands our for its nuanced choreography and layered performances, all three works highlight the company’s ability to shepherd unique dancers with varying body types and styles, and its flair for the theatrical that elevates dance from pure movement to an emotional experience.

The program opens with George Balanchine’s La Source, a waltz-y piece that, while pretty, isn’t as complex or exciting as the other two works in the show. PNB is known for its Balanchine repertoire (artistic director Peter Boal trained under the renowned choreographer at the School of American Ballet in New York), but this is the company’s premiere of La Source. A hybrid work that draws from several of the choreographer’s earlier works and pays homage to classical French ballet, La Source features a string of lively pas de deux, solos and ensemble work. On opening night, principal dancers Carrie Imler and Jerome Tisserand were the lead duo, with principal Elizabeth Murphy dancing lead in the ensemble sections.

Imler is set to retire after this show and there was something bittersweet about her performance, a tension between strength and fragility. Although she’s been cast with Tisserand before, this time Imler seemed to dominate the duet and there were moments where it seemed an uneven match; some lifts and holds weren’t as effortless as they could be, and each of the two shone most brightly in their respective solos. Murphy, despite a couple of near falls, was lovely, a disciplined counterpoint to the ensemble, which seemed messy and not in sync. Hopefully next season she gets cast in more lead roles—her potential is great.

The second and most exceptional piece in the program is Jerome Robbins’ Opus 19/The Dreamer. An ethereal work seemingly inspired by Balanchine, it follows principal James Moore as he dances through a purple-and-blue clad ensemble, his movements strong and sharp but infused with an air of delicate mystery. He folds into himself then stretches as the female ensemble members march out en pointe then trot along behind him—haunting the background in one scene, then commanding his attention with playful leaps and jumps and frantic, abstract motions in the next. Principal Noelani Pantastico’s partnering with Moore is sublime. They have a strong on-stage connection that infuses their duets with energy, and they are constantly counterbalancing each other’s movements. Several adagio duets showcase her limbs; when Moore lifts her, Pantastico’s leg angles into a gorgeous extension. The ensemble work in this piece is cleaner, more enticing than the first—it felt as though the dancers were more emotionally invested in Opus 19/The Dreamer and it came off as the evening’s highlight work.

The evening’s titular work, Pictures at an Exhibition, is the newest, choreographed by Alexei Ratmansky for New York City Ballet in 2014, and staged for PNB by former NYCB principal Wendy Whelan. Set to 19th-century composer Modest Mussorgsky’s virtuosic piano suite of the same name, the dramatic piece features ten dancers (five women, five men) moving through varying combinations (solos, duets, ensembles) and emotions from lively joy to tense seriousness. Video projections by Wendall K. Harrington of Wassily Kandinsky’s watercolor, Color Study. Squares with Concentric Circles formed the backdrop. Each section of Pictures holds its own magic. There’s playful group work as dancers mirror the circles in Kandinsky’s painting, with individuals popping out of the group to perform solos. Principals Karel Cruz and Elizabeth Murphy’s gorgeous duet features sensuous partnering and impressive lifts and balances. It’s a work that draws on and highlights the individual talents and personalities of each dancer, allowing them to pour their personalities into their roles. More than that, it leaves us wanting more, already anticipating next season’s premiere.

Pictures at an Exhibition runs through June 11 at McCaw Hall. Tickets here.