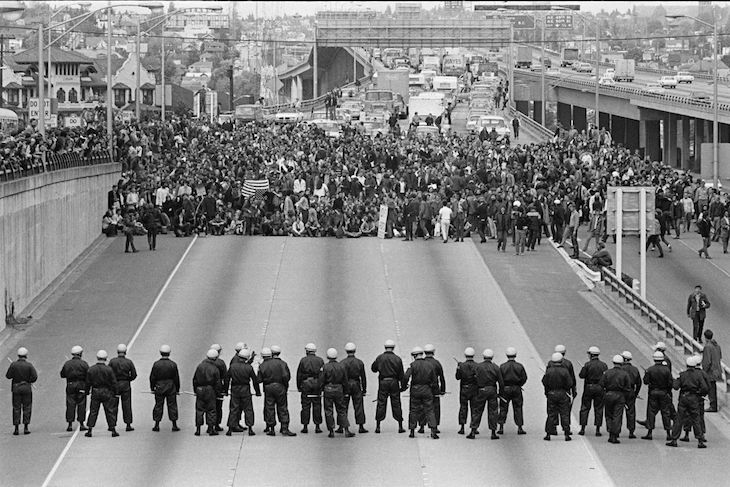 On May 5, 1970, protestors blocked I-5, demonstrating against both the bombing of Cambodia by the United States and the National Guard killing of four students at Kent State University. Photo courtesy of MOHAI–Seattle Post-Intelligencer Collection

Seattle City Attorney Pete Holmes made headlines recently with an editorial attack on what he sees as the lawlessness of the city’s protestors. Published as an op-ed in The Seattle Times with the impressively unambiguous title “If You Protest Recklessly, I Will Prosecute You,” Holmes’s piece unfavorably contrasts Seattle’s contemporary progressive protestors with their forbearers in the Civil Rights movement. He then launches into a dubious legal defense of his professional prerogative to punish them. In authoring this op-ed, Holmes has established himself as a pundit-prosecutor on the incorrect side of history.

Holmes’ argument is hatched in a hackneyed whitewashing of a rich black past. “Protestors like Rosa Parks and Dr. Martin Luther King Jr. have become symbols of social movements,” he says. “[But] a newer form of civil disobedience has been used in Seattle—the shutting down of public roadways. The ripple impact of these unanticipated traffic blockades creates gridlock in the downtown core of our city and on state Highway 99.”

Nevermind that one of the most enduring images of Seattle political history was a showdown between Vietnam protestors and the Seattle Police Department on the then-new Interstate 5 in 1970. In taking aim at protestors who shut down traffic in May 2018 to protest the involvement of local financial institutions in a controversial cross-Canada oil pipeline, Holmes ignores that the most iconic images of the Civil Rights movement in the Jim Crow South involved exactly the kind of disruption he decries: disruptions that used public space normally reserved for cars to further the cause of democracy.

The 1965 civil rights marches across the Edmund Pettus Bridge included the infamously violent “Bloody Sunday,” when Alabama patrolmen pummeled protestors with billy clubs and tear gas. These were not the car-friendly picnics Holmes remembers them to be. They involved officials turning off nearby streetlights and traffic signals, as well as a lengthy assault on protestors by police that shut down U.S. Route 80. When the normally conciliatory President Obama memorialized the 50-year anniversary of the marches at the foot of the Edmund Pettus Bride in 2015, he didn’t celebrate the protestors for making their points without making anyone late to work; he emphasized the confrontational nature of Civil Rights tactics, calling it “a clash of wills, a contest to determine the meaning of America.” As that competition endures today, Pete Holmes’ office has picked a side.

If Holmes insists on historicizing his flawed argument, he’s incorrect to invoke Civil Rights protestors who used the exact same tactics he threatens to criminalize. The true ancestors of his argument are the reactionary conservatives who, as the 1960s turned into the 1970s, used fear of activists to construct a new national conservative majority. As Andrew Hartman writes in his 2015 book A War for the Soul of America: A History of the Culture Wars, “ever since Nixon leveraged ‘law and order’ to help win the presidency in 1968, throngs of politicians have used similarly coded messages about black lawlessness to great effect.” Nixon’s 1968 and 1972 campaign appeals to a “silent majority” of white Americans who had grown to disagree with the social democratic reforms of the 1960s was the political wedge that secured him the presidency. Donald Trump has used similar rhetoric, amplifying black activism in the NFL and in the #BlackLivesMatter movement to signal boost conservative outrage.

The conservative trope of “law and order” hinges on a double standard; an arbitrary enforcement of laws and norms that Pete Holmes, a Democrat, endorses. Nationally, the energy of activists in the Tea Party or even of (mostly white) sports fans who destroy public property when their teams win championships escape stigmatization. Locally, Holmes’ hosannas about the purported criminality of Seattle protestors was nowhere to be found when councilmember Mike O’Brien was muscled out of a Ballard party because of his support for the Employee Head Tax, or when conservative counterprotesters at the University of Washington shot a student who demonstrated against the appearance of a Nazi sympathizer. By keeping silent about each of these incidences, but squawking about environmentalist protestors, exactly which peace is Pete Holmes’ office interested in keeping?

Privately, Richard Nixon used the n-word to refer to the black citizens he represented as president. Publicly, he resented the (accurate) insinuation that the phrase “law and order” was a dog whistle designed to stigmatize progressives who protested against war, racism and environmental rapine. To his credit, Pete Holmes, who studied environmental sciences at Yale and once worked for the National Resources Defense Council, identifies with the causes championed by Seattle activists. “I am fully committed to immigrants’ rights and environmental protection, and I believe the advocates’ cause to be just,” Holmes writes in his editorial. “But what I personally believe doesn’t matter.” He’s right. Holmes’ professional capacity as City Attorney has the potential to do more harm than his personal sentiments can do good.

Pete Holmes should understand the power of selectively enforced laws better than anybody. He has asked Seattle Municipal Court to dismiss charges and vacate convictions related to misdemeanor marijuana possession. These stances situate him considerably to the left of “law and order” conservatives who have pedaled fear of drug use for so much political capital over the last 40 years that America has the largest prison population in human history. Nonetheless, progressive members of Seattle’s legal community have found Holmes’ carceral credo puzzling at best, inflammatory at worst.

Within hours of the editorial’s publication, lawyer and activist Nikkita Oliver declared on Facebook, “Pete Holmes does not care about your First Amendment rights. He is saying bureaucracy and people getting to work on time matters more than doing the right thing.” The president of the Seattle chapter of the National Lawyer’s Guild wrote in Crosscut that he’s “never known a protestor to actually be found guilty of pedestrian interference.” Meanwhile, the Seattle pedestrian interference ordinance that Holmes invokes to make his case for prosecuting protestors makes an explicit exception for “acts authorized in exercise of one’s constitutional right to picket or to legally protest.”

Truth be told, if Holmes is the environmentalist he claims to be, perhaps he should use the office of City Attorney to encourage more protestors to block traffic, and therefore discourage driving. With Seattle summers now rendered unbreathable because of forest fire smoke in the Pacific Northwest, the city can use every means of reducing regional carbon emissions it can get. In the mean time, protestors will continue defying Holmes’ authority, daring him to press charges when they exercise their constitutional right of assembly and their municipal right to block traffic to prove a political point. Days after his editorial was published, members of the labor union Unite Here Local 8 took to the streets to protest worker injustices in the city’s hospitality industry.

As it turns out, an op-ed and a protest are not too dissimilar; both are meant to win points in the court of public opinion. That Holmes can use the pages of Seattle’s preeminent daily newspaper to make his case speaks to the comfort of his position, and the material privilege of those who agree with it. Until activists have a similar amount of clout in City Hall, the streets remain the only option.

“The march on Selma was part of a broader campaign that spanned generations,” Obama said at the Edmund Pettus Bridge. “The leaders that day were part of a long line of heroes.” Unfortunately, this saga has an equally long line of villains.