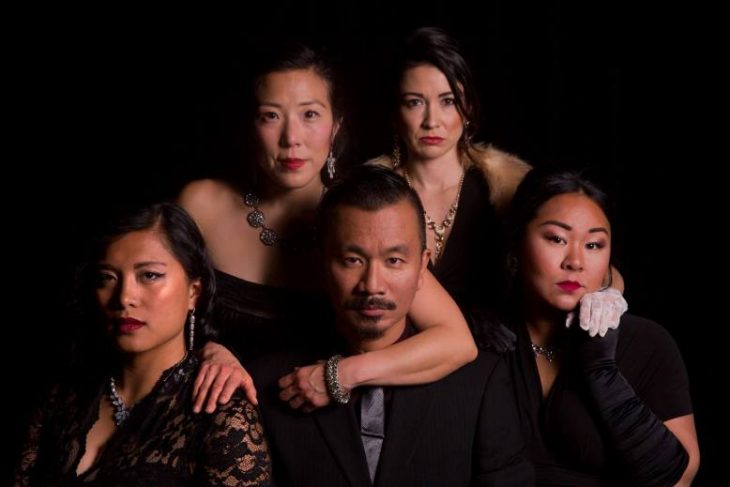 The cast of 'Persimmon Nights.' Photo by Dangerpants Photography

In Persimmon Nights at Café Nordo, Jae Min Kang, the onetime owner of the glitzy Persimmon Grove nightclub in Los Angeles’s Koreatown in the 1960s, has fallen on hard times. He’s dead, for one thing. That detail notwithstanding, his glory days are long gone. His beloved club has been turned into a Chinese buffet in a gentrified neighborhood and his family is in tatters from a lifetime of buried secrets and unfulfilled promises.

It’s not exactly the frothiest material, but playwright Seayoung Yim nevertheless whips the drama into a concoction that feels light enough for dinner theater and substantial enough to do her characters justice. It’s a neat trick, smuggling a lifetime’s worth of emotional anguish between jazzy pop standards from the three-piece band and family-style Korean dinner courses.

So, Jae Min, played by the always-rakish Ray Tagavilla, is dead. But he doesn’t stay that way for long, as the show hurtles from his funeral back through time to chronicle his preternatural ability to mistreat the women in his life. There’s his wife, Young Ah (Sara Porkalob, who also directs), who gave up a chance at stardom with her girl group, the Kimchi Kittens, to marry him. There’s his illegitimate daughter, Hae Kyung (Mara Elissa Palma), who barely knew him, their interactions limited to an endless parade of answering-machine messages. There’s his mistress, Sun Young (Annie Yim), who sees through his bullshit but gets sucked in anyway.

Jae Min has a go-to pickup line about how there are two kinds of persimmons, and one is shaped like a breast. Sun Young scoffs: There may be two types of persimmons, but there’s only one type of asshole. Soon, the pair is dancing intimately right in front of Young Ah while she performs on the Persimmon Grove stage. Seems like he’s a special kind of asshole.

The show is organized around momentous occasions—a funeral, a wedding, a birthday—where the dinner service fits in naturally and the settings conjure flashpoints of conflict. The shading of the performances—Porkalob’s set-in resignation, Palma’s yearning, Yim’s defiance—fills in the missing details of the mundane moments in between. Tagavilla’s effortless charm goes some of the way toward explaining their residual affection for Jae Min. The other performances complement his by displaying the consequences.

Lest things get too serious, the show is punctuated with frequent musical interludes, some by the house band (Nikki Dee, Olivia Hamilton and Elizabeth Currey) and some by the Kimchi Kittens (Porkalob with Melissa Maañao). And lest it seem like the women in Persimmon Nights are simply trod-upon victims, Porkalob belts out a rousing rendition of “Big Spender.” Tucked into the show’s postscript, Cy Coleman and Dorothy Fields’ classic show tune carries an extra-sardonic bite on phrases like “man of distinction” and “so refined.” In his life, Jae Min was the domineering alpha male who charted the courses for all the women in his life. He may get the most words in Persimmon Nights, but he doesn’t get the last one.

The meal, created by executive chef Erin Brindley and Corrine Magin, is a mostly satisfying collection of Korean dishes: seafood pancakes accompanied by half a dozen banchan (side dishes, including the umami-rich delight of tiny dried anchovies), japchae (glass noodles with vegetables) and a ssam platter with beef bulgogi and pork belly. Dessert, “shaved” ice that had the consistency of the ice crushed by a refrigerator dispenser, was significantly less appealing. But in splitting the difference between penetrating family drama and carefree evening at the lounge, the show strikes the right note.