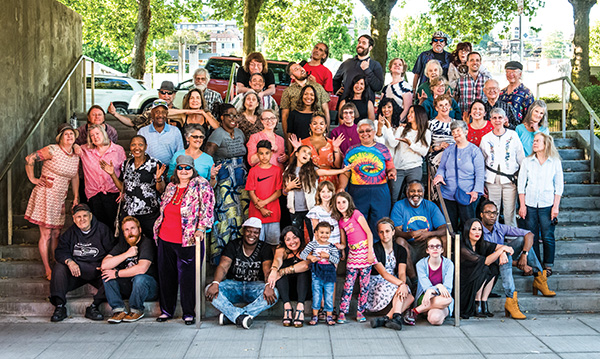 The delight on Marya Sea Kaminski’s face is contagious. After five months of waiting, the associate artistic director of Seattle Repertory Theatre has just heard back from the Dead Baby Bike Club, and they’re in to play a group of aggro romantic suitors in the Rep’s mammoth, community-focused reimagining of The Odyssey, which Kaminski is directing. This cadre of thoughtful hooligans, a biker gang on actual bicycles, is perfect casting.

In early September, the Rep will present its first Public Works program, an adaptation of Homer’s epic poem about Odysseus’ 19-year journey through the ancient world and home again, past countless dangers and temptations, Cyclops and sirens, while his wife Penelope fends off suitors who would take his place. In total, the cast will comprise more than 100 people—kids and seniors, professionals and amateurs, youth choir members next to pro dance groups and Equity actors.

It’s a bold choice for many reasons. The free show in September, an expensive investment on its own, is the public-facing tip of the iceberg, after months and years of Rep staff and teaching artists working with community groups and welcoming those groups to Rep shows for free—listening, learning, building community. Then there’s the wild unpredictability of putting so many people, of such varied experience, on stage. But when was the last time you saw real risk at the theatre—something unexpected, with the potential to be sublime or ridiculous or surprising beyond a raised eyebrow? When was the last time you saw your community reflected?

In a theatrical era when less is always more and two-person, zero-intermission plays are regional-theatre catnip, the Seattle Rep is going the other direction, toward a stage packed with everyone from top-tier triple threats to first-timers. It’s thrilling. It’s huge. And if all goes well, it will be so much bigger than just a show.

Making theatre “of, by, and for the people” is a fantastic tagline, but the real challenge, faced by all cultural organizations grappling with issues of equity and inclusion, is to go beyond marketing-language lip service and into behavioral change.

“Marya and I called it ‘50 first dates,’” says Simone Hamilton, the Rep’s artistic engagement coordinator and Kaminski’s indefatigable partner in this Public Works process. “We went on 50 first dates with nonprofits, because there are so many great nonprofits and community organizations in this city, but it was important that they have our same core values of equity and joy, and see a place for creativity in their work, and see that that place has value in society.”

Public Works began at the Public Theater in New York in 2013, conceived and developed by director Lear deBessonet, who still runs that program. The massive undertaking happens both within the Public’s walls and far beyond, and Seattle Rep’s program functions the same way. Teaching artists run workshops at community organizations all over the city and those organization members are welcomed to shows at the theatre. Then, folks who choose to begin to collaborate on a massive, pageant-style performance, presented in New York at the Delacorte Theatre in Central Park and in Seattle at the Rep’s Bagley Wright Theatre.

Public Works’ production of The Winter’s Tale dazzled Seattle Rep artistic director Braden Abraham when he saw it in 2014. At the time, Abraham was the newly appointed interim artistic director of the Rep, which was reeling from the April 2014 death of beloved artistic director Jerry Manning. “That September,” Kaminski says, “we were sitting around talking about what we were going to do, trying to start to dream and vision about what we wanted the theatre to be. So it was posed as a question: If we could do [Public Works], if it would translate it here, is that the direction we wanted to move forward in?”

With a grant from Theatre Communications Group, Kaminski traveled to New York to observe Public Works operations, to see if it could work for Seattle. The first event she attended was the First Day Potluck, where everyone involved in a production eats together before the first rehearsal and actors get measured for costumes and start to build theatre behaviors, like signing in on the rehearsal sign-in sheet.

“[Public Works was] in their third year at that point, and I met this guy named Donald who had been with Public Works all three years, and he had met his wife at Public Works,” Kaminski says. “I was like, this is fucking magic. It’s literally changing lives. They’re all wearing Public Works T-shirts, and they had built such a culture of welcome that it wasn’t the staff that was welcoming me, it was the participants.”

Also observing was DayRon Miles from Dallas Theater Center (the Rep’s TCG grant was a shared one), and a Public Works cohort was born. In addition to learning from New York’s years of experience and the first Public Works production outside New York, at Mosaic Youth Theatre of Detroit in 2015, the cohort is an invaluable resource for comparing notes about adapting Public Works for different cities. For Dallas, that was about adjusting the program for a heavily Spanish-speaking community group. For Seattle, our city’s rapid rate of change took focus.

“The communities and people we’re working with are the people who are getting shafted the most by what’s happening in this city, whether it’s displacement and gentrification, homelessness, Medicaid with our seniors or the education system with our kids,” Hamilton says. “The way this city is growing, they’re not seeing themselves as a part of that new city, and that breaks my heart. So when we started every class, we didn’t program what we thought they needed. It was a conversation.”

In looking for Seattle community organizations to partner with, Kaminski and Hamilton sought a broad geographic spread, as well as diversity of age, gender, ability and race. It was also important that each partner organization had a stable infrastructure and the bandwidth to commit to a long-term partnership with the Rep. (The partners are Sound Generations/Ballard NW Senior Center, Jubilee Women’s Center, Centerstone in the Central District, Path with Art and two locations of the Boys & Girls Clubs of King County, in the far north and far south ends.)

When it comes to the workshops themselves, Kaminski, Hamilton and the theatre teaching artists they work with let the community members lead the way. “What do you need to feel safe and heard and seen in this space?” Hamilton asks. The seniors liked to sing; their program became musical theatre-focused. With the Boys & Girls Club, their entry point was through spoken word; now the kids are writing plays. At Path with Art, people wanted to learn about monologues and auditioning. The only constant is food. “We break bread and have food at every workshop and will at every rehearsal,” Kaminski says.

While tepid, traditional “community engagement” programs often focus on teaching theatre skills, these workshops became about more than one-way instruction or free tickets to Rep plays. “It’s showing up in more ways than just when we need something from them,” Hamilton says. “It’s not just showing up for the one-hour class. It’s showing up and volunteering in an organization’s food bank. It’s showing up at the Senior Center when they have an auction and helping out. It’s showing up and being judges at the Southwest Boys & Girls Club talent show.”

The problem with many initiatives to diversify theatre audiences is that even if you’re programming diverse theatre, you’re programming it for people who already feel comfortable in a theatrical space. Theatre creators and regular theatregoers forget how rarified that space is, how unwelcoming it can be to newcomers. Where do I enter? What happens if I’m late? What do I wear? Can I leave and go to the bathroom?

So when Hamilton uses the phrase “aggressive hospitality,” she means it. Are you an older person who might need an aisle seat when you see a show at the Rep? She’ll offer it before you ask. Do you have dietary restrictions? At the shared meals before rehearsals and workshops there will never be a gluten-free (or any such dietarily specific) option because they choose food that everyone can eat. It’s a simple, meaningful way to make sure that no one is an “other.”

This Odyssey, as adapted for the Public Theater by Todd Almond, is a music and dance-filled one-act starring Broadway vet Terence Archie as Odysseus, with local stars Alexandra Tavares as Penelope, Serrah Russell as Calliope and Justin Huertas as the show’s narrator. Community members will play groups like Odysseus’ crew and the sirens, and in addition to Dead Baby Bike Club as the suitors, there will be cameo appearances by groups such as dance team Purple Lemonade as the Phaeacians who celebrate when Odysseus washes up on their shore. Rehearsals begin on Aug. 1, when Kaminski and Hamilton are joined by a cadre of notable local theatre makers: choreographer Trina Mills, music director R.J. Tancioco and associate directors Hattie Claire Andres and Jéhan Òsanyìn.

In the arts, quantifiable benefits are hard to come by. But the qualitative work of Dr. Shirley Brice Heath, a linguistic anthropologist at Stanford University, is telling. Heath has been studying Public Works in New York and Dallas, to explore the positive, transformative impacts of the program. To measure them, she and a team have been counting positive and negative self-statements made by participants.

“Instead of, I can’t, I can’t they start to say This is hard, but I’m going to do this,” Hamilton says. “Or, I, I, I and you, you, you become we, we, we.” The residual effects of that change are critical and lasting. “In New York, after three years, people who had never gotten a job had a job. They could articulate themselves in an interview. People who’d never gone to the doctor go to the doctor because they want to do their dance steps better. It’s about having a reason to do stuff.”

This first year is a grand experiment: Is the Rep the right place for this program? Is Seattle? Is the program mutually beneficial to everyone involved? What should be next? “We’d like to commission stories, well-known myths, adaptations that might resonate a little bit more with our institutions and our communities,” Kaminski says.

Bottom lines and nonprofit boards being what they are, the future of Public Works depends on funding. A program like this is a risk off stage as well as on. It’s expensive to give away tickets to shows, to pay the professional artists and crew members needed for the show, to costume a cast the size of which no local professional theatre has ever seen. But this will be a test of how willing we are, as a theatre community, to welcome people who aren’t already included in our world, and to expand our own definition of what glossy, “professional” theatre looks like. As Kaminski says of the Detroit production, “By the final number, seeing those 150 people who you’ve watched trip and falter have beautiful moments on stage, you can’t help but get to your feet.” Saying a production “has heart” sounds patronizing, but what it should mean is that everyone on stage is being honest—something theatre could use a lot more of, especially in these numbers.

“What I want to say is, this is going to change you, and that’s why you should do it,” Kaminski says. “Meeting our two-year-old and our 89-year-old, who’s suffering from dementia but still really wants to do this show—that’s going to change you. And it’s going to remind you why you went to this crazy thing in the first place.”