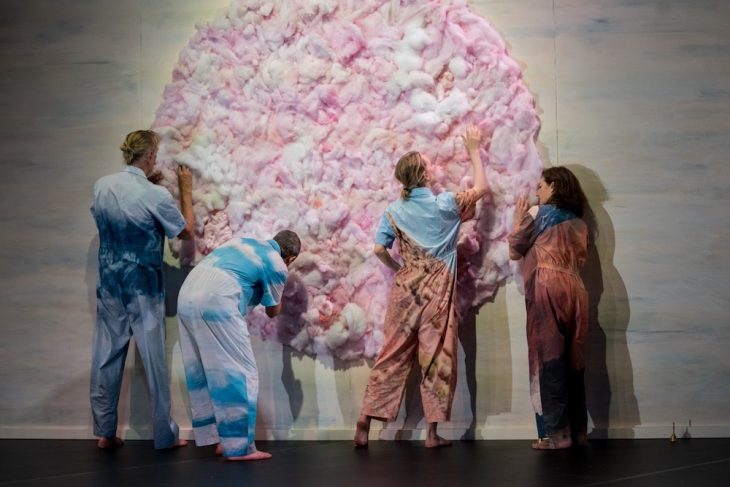 Lying on their bellies a couple of feet apart, two dancers blow a tuft of cotton candy across the floor between them. It glides almost effortlessly back and forth, tumbling occasionally. The exchange is humorous and sweet, and seems to get at the heart of Peggy Piacenza’s The Event, which premiered last weekend at BASE: Experimental Arts + Space, and manifests an experience that’s never quite here nor there, but magically suspended in between.

Like some kind of heavenly plane, everything about BASE feels pristine and airy. A giant circle of light pink cotton candy hangs on one wall, feathers dangle from the ceiling and a large gold frame surrounds a projection of slow-motion surf. Bright, warm lighting coats the dancers, who wear coveralls printed with clouds and abstract landscapes. At first, everything is quiet and pedestrian. Dancers Ezra Dickinson, Kim Lusk, Wade Madsen and Amelia Reeber enter one at a time, settling into the space. Lusk leans against a wall and munches a piece of cotton candy pulled from the set, smiling to herself. The interactions among the dancers are gentle but neutral—they too feel suspended, like souls who are tied to this place.

Piacenza remains separate at first, dressed in a black leotard. As the other four dancers sit facing each other, ringing tiny handbells in complex rhythmic patterns, Piacenza sits just outside the circle. She hides under a piece of burlap as the others bounce about joyously. Her retreat feels recognizable to anyone who has lost someone. The words “You know you’re still in mourning, but in another phase. Have you tried counting?” repeat throughout the work, as it dips into dark, fraught places, followed by quietude, questioning or unexpected humor, capturing the complexity of grief. (Piacenza has dedicated this show to her mother, who passed away in March of this year.)

Piacenza finally joins the others when she gathers Lusk under her burlap sheet and they huddle together, giggling, before swapping outfits. Lusk emerges in her own black leotard, and it reads like a metaphorical birth into the world. The lights go red and the music becomes quick, dark and impending. A series of fast and difficult pirouettes combines with exacting gestures and Lusk dances as if for her life. Piacenza, perched high on a rolling stairway, looks on concerned. More solos pepper the show, each capturing a different struggle as the others watch. I imagine that each of these is a life lived here on earth; one human experience, witnessed by the otherworldly beings who remain separate.

One of the most moving performances centers on Madsen, who announces, “I had a heart attack.” The other characters react with detached sympathy, barely concerned, but Madsen seems to realize his own mortality before our very eyes. His limbs shoot out clear and direct one moment and fidget the next. “I’m a pro, a professional! A professor!” he spits out defensively, desperate to hang on to his identity against the tide of aging that takes us all.

Piacenza’s movement has a particular quality that erupts out of her dancers like an exclamation, a reflex. It’s at once precise and difficult to categorize, like a wrist flicking or a body jostling through happenstance, but intentional and repeatable. Reeber performs a solo in which each movement feels like she has just started to go somewhere but then hesitates, turning back, further emphasizing that place of in-between.

Dickinson’s featured moments often take on an extreme physical state. At one point he’s consumed by shaking, his body reaching out, and a mystified Madsen asks, “Are you cold? Hungry?” The obviously mismatched response speaks to a struggle for our internal worlds to communicate across the thresholds of our bodies.

The Event feels like an attempt to bridge that distance—between the self and the other, this world and the next. Its intimacy comes not from the dancers’ connection to one another, but from each navigating their own experience for the audience to see, their alone-ness made visible. Both deeply personal and vividly abstract, Piacenza’s dreamy, emotional landscape shows us that the lonely experience of our humanity is something we all have in common.