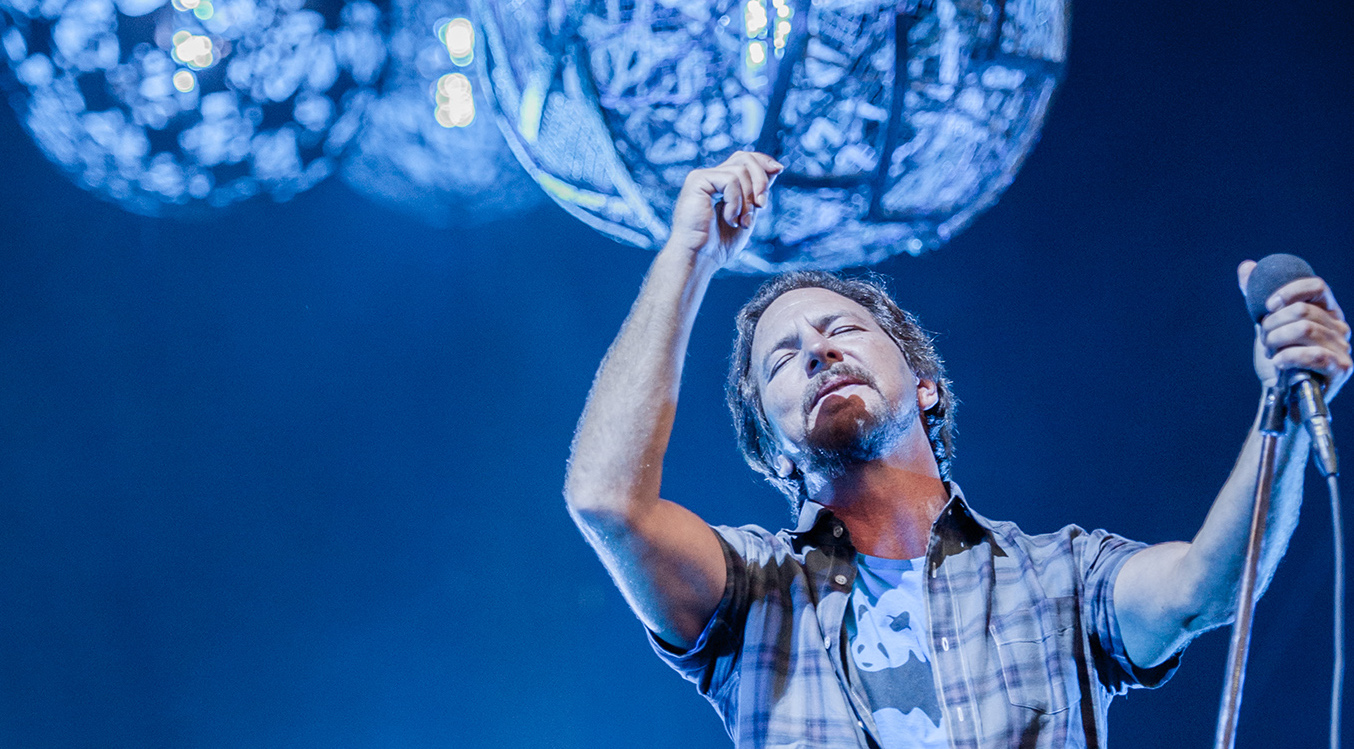 All photos by Dave Vann.

Leading up to last night’s sold-out concert at Safeco Field, Pearl Jam fever had overtaken the city of Seattle, its symptoms spreading across social media. They included effusive outpourings of heartfelt personal stories and musical-emotional attachment spanning the last 25 years, as well as snarling backlash against Pearl Jam’s earnest do-gooderism, its monolithic unavoidableness and its general musical irrelevance in the year 2018 AD. Pearljamitis reflects a greater malady afflicting humanity’s current ability to get anything done: A given creative force brings a lot of genuine positivity to a lot of people, but due to its elevated status and financial means, is blown off as tourists, performers, wannabe saviors.

Sure, skepticism is warranted. But these Home Shows, as the band named their two-night stand at Safeco, demonstrate that we can indeed have nice things—such as rock ‘n’ roll concert spectacles—as well as forward momentum on social issues. Pearl Jam is from the 1990s, an era before the term “virtue signaling” was invented, an era of Tibetan Freedom Concerts thrown by a goofy rap-rock band. That was a long time and many memes and hashtags ago. Today, in an age of instant information and constant ethical handwringing, every moment of cultural engagement must stand up to a certain postmodern calculus, and the band seems to know this. During the second, final encore of the show, after two-plus hours of music, the house lights came up, the band went into “Alive” and the audience sang along to every word, basked in stadium-made daylight at 11 p.m. on a Wednesday night. “Seattle, fucking look at yourself!” Eddie Vedder commanded. It was an invitation to self-reflection, and things looked pretty good. 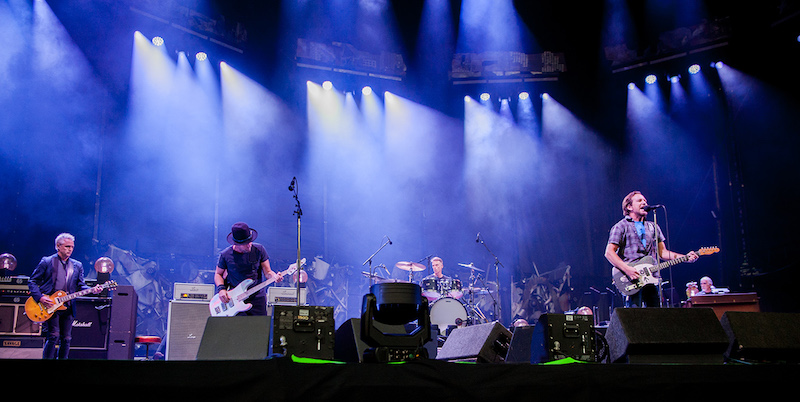 The Home Shows have so far raised $11.5 million for homeless services in the Seattle area. One-hundred and forty institutional partners have rallied around the band’s homelessness initiative, including all of Seattle’s professional sports teams, 80 restaurants and dozens of multimillion-dollar corporations. Some 20,000 individuals have signed on to “band together” to address the issue. There’s more, but these numbers are enough. They’re serious.

Factor the production costs (millions dollars to be sure), the human and natural resources and the leeching of our collective attention span going into these shows. How does all that look in the light of $11.5 million? How does it compare to the unabashed joy of 40,000 people singing their favorite songs for 2.5 hours, of seeing themselves reinforced and gently challenged by the stars on stage? Not usual mathematics of a rock concert, but Pearl Jam invited this upon themselves and, ultimately, came out very much in the black. 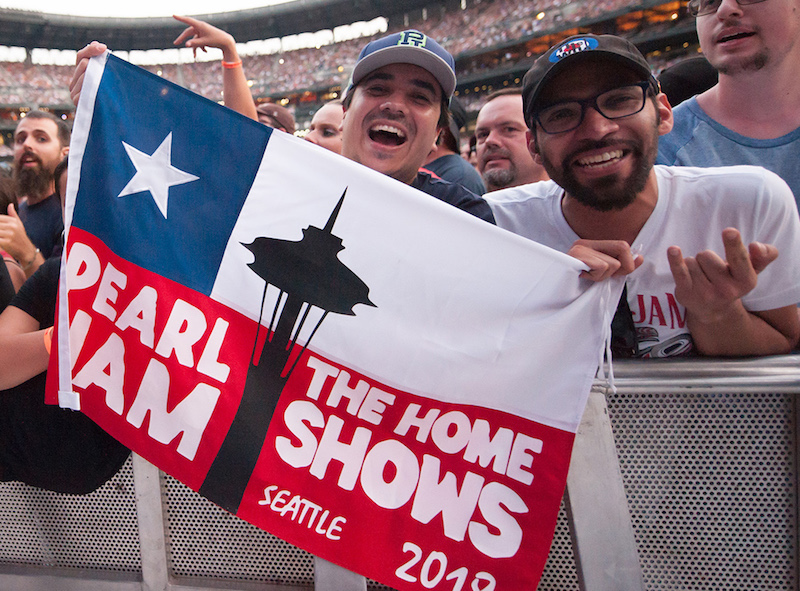 The band has stated that they hope these shows will be a turning point in the public conversation about roots of the housing crisis, and as much as a six-piece band on a massive stage inside a baseball stadium can, Pearl Jam shared the spotlight, directing attention to “the issue,” as Eddie Vedder put it, consistently, sincerely, in way that added depth and feeling to the performance. Before the music started, videos played on the JumboTrons flanking the stage, testimonials from members of the Chief Seattle Club and other homeless outreach projects. Things were different 28 years ago, Vedder said early on, when the band played its first show down the street. “It only took 30 minutes to cover the issues then. It’s gonna take more time to cover the complexities of modern life.”

Vedder talked about our “homeless neighbors,” people who he said make the city alongside us. At one point he went into deep detail about the genesis of the song “Evenflow,” which he said was inspired by his friendship with a homeless Vietnam veteran in Pioneer Square—and the man’s subsequent death—during the band’s early days. Humanizing, familiarizing, beating a simple drumbeat over a complicated cause: These are crucial things a beloved rock band can do to a willing crowd. Things Pearl Jam has a demonstrable history of. 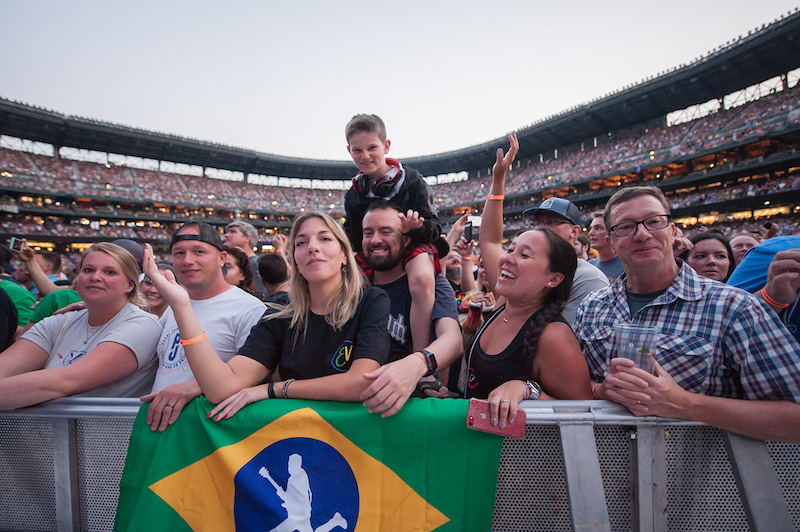 Earnest yearning. It’s what Pearl Jam has always excelled at and I believe what makes the band special, important. It’s in Vedder’s voice, of course (yearn-yarl is the yin-yang of grunge), evident in songs like “Release Me,” which came third in the night’s setlist and sent the crowd and the band into their first symbiotic overdrive. It’s also in the melodies of songs like Stone Gossard’s “Alive” and the Mike McCready-penned “Given to Fly,” the latter of which came an hour in, its ascending dynamics leading further into communal band-crowd ecstasy. “He floated back down ’cause he wanted to share/The key to the locks on the chains he saw everywhere,” Vedder sang.

That earnest yearn is a powerful, painful pull toward some kind of human transcendence, and Pearl Jam articulates it better than any living rock band. They perhaps nicked it from the Who, another band of working-class dudes with a populist, aspirational bent toward some intangible betterment. And it’s why I have to believe that, of all things, a goddam Pearl Jam concert has the very real potential to lead to positive, real-world change. 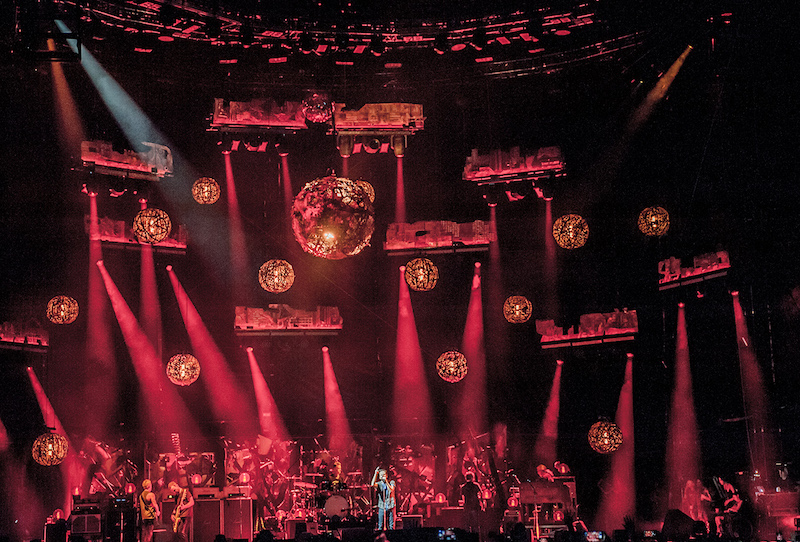 Empathy. Another thing Pearl Jam excels at, though sometimes rather clumsily. Vedder sings stories that may or not be his: an elderly woman, a girl at a table, a boy in a classroom (though there was no “Jeremy” last night.) He opens to other people’s experiences and hopes we will open to them, too, not just in song songs but in action. The band brought out Brandi Carlile to sing her song “Again Today.” During an extended acoustic interlude, they introduced a pair of Seattle school teachers and a pair of middle-school-aged girls—band daughters?—to dance to their cover of the White Stripes’ “We’re Going to Be Friends.” Toward the end of the show Vedder cited empathy directly, again finding a middle ground between recognizing the size of the problem and encapsulating the collective need to do something:

“There’s a bit of magic that happened in a short amount of time. We got everyone to have conversations and we elevated the discussion and empathy became action. When you get the momentum to keep it rolling, we ask of you to do what you’re gonna already to, to vote and to hold the people you’re voting for accountable. There’s good people out there. This city proved it could happen here and it could happen anywhere. We can eradicate this problem when we’re as profitable as we’ve ever been. We can beat this. We need your help. And all of us are the one.” 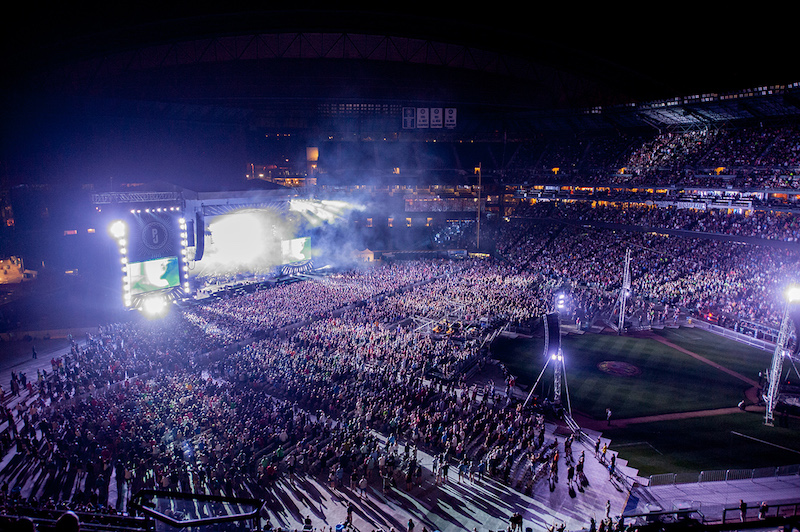 Vedder swigged off a bottle of red wine and looked like a very handsome PE teacher, and Gossard lived out a hipster Bill Gates rock-nerd fantasy, and bassist Jeff Ament performed in beat-up slip-on Vans. Vedder gave origin stories to all the guys, naming Seattle neighborhoods (Laurelhurst! Capitol Hill! Pioneer Square!) and old jobs and streets and schools. All the while McCready played the part of preening, perfect guitar god. Not one but two solos in “Corduroy.” A fisheye camera set up among his foot pedals and an overhead spotlight to achieve maximum drama in his big-screen appearances. Three costume changes throughout the night—one of which included a sleeveless Showbox t-shirt.

Seeing that shirt I realized the fraught depths of this city’s current cultural condition. The pillars of Seattle’s music community are threatened by development or they’re being brought down by their own vile, predatory behavior. We are losing trust in our institutions and have yet to replace them with anything better, mainly because we can’t agree on anything at all, even as we care so much. Some of us end up looking to old, familiar music for direction. To people who’ve always demonstrated a strong moral compass. Given their intention, their sincerity, their history, we could do worse than Pearl Jam.

After all the handwringing and calculus, perhaps the real question is, Is this artist I’m looking to making good choices? To which I reply with Pearl Jam’s two-song run in their final encore, with the lights up all the way, the crowd loud and buzzed and singing along, when they played “I’ve Got a Feeling” by the Beatles and “Keep on Rockin’ in the Free World” by Neil Young. Those old songs say a lot about our present moment and last night 40,000 people sang them out loud to each other. I can’t tell you the depth of our collective reckoning, but I can tell you that it happened, and all of us were in it together, and we can go from there.