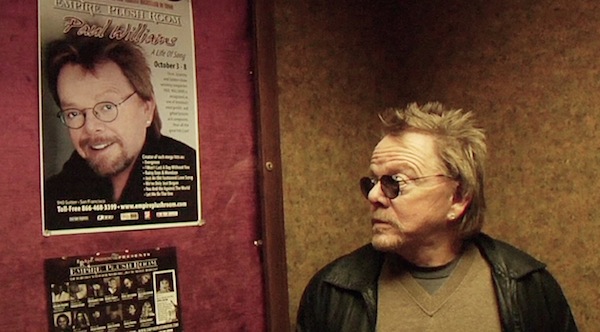 It’s common enough to be a cliché: the story of a performer who rises to the top of their profession, sinks into a haze of drugs and alcohol, then finds redemption and rises again.

And that’s certainly something hovering in the background of Paul Williams Still Alive, a new documentary by Stephen Kessler that recently played SIFF and opens at SIFF Cinema at the Film Center on July 13. But the main story is something quite different. It’s a road movie. It’s a buddy film. It’s about two guys, seemingly mismatched, who weather some storms together and end up becoming good friends. “I described the film the other day to somebody as the combination of a road picture, like [Bob] Hope and [Bing] Crosby—Road to Morocco and Celebrity Rehab,” says the film’s subject. “It’s this weird combination of worlds.”

Paul Williams, of course, is the songwriter who provided much of the soundtrack of the ‘70s: “We’ve Only Just Begun,” “An Old Fashioned Love Song,” “Evergreen,” “The Rainbow Connection” (from The Muppet Movie), to mention a few. Though his biggest hits were generally performed by someone else, Williams sang and released his own records as well, in addition to appearing in films (the cult hit The Phantom of the Paradise, for which he also wrote the score; Smokey and the Bandit, Battle for the Planet of the Apes), and just about every talk show and variety show of the era.

But Paul Williams Still Alive isn’t about that storied career. Instead, it begins with the initially bumbling Kessler doggedly following Williams around to the point of distraction. “There was an evolving relationship, which you got to watch mature on film,” says Williams, jokingly adding, “and we also needed a lot of that time for arguing. ‘You can’t even wait a minute? You’re interrupting me!’ ‘Well, that’s too bad!’ Which I think is something that’s really kind of unique about the film.”

When Kessler tracks Williams down, he finds him in midst of sporadic touring, performing shows in the U.S. and abroad, as well as making time to speak to various groups about substance abuse and recovery; not living large, but nonetheless very comfortably. “My theory is that Steve would’ve been happy to find me living in a trailer behind a motel or something, with a gig at a Holiday Inn where I played an organ and I had a puppet and I sang,” says Williams. “For him to have the perfect story, he would’ve liked to find me there in the pits and everything. And instead he found me in a rented house waiting for the house I have now to come available. And loving my life.”

Williams is polite at Kessler’s constant intrusions—unlike Ginger Baker in Beware of Mr. Baker, another rock doc that played SIFF this year, he never lashes out and hits his director in the face with a cane—and eventually the director’s earnestness wins him over. The turning point (which we see on film) comes when Williams tours overseas, with Kessler amusingly nervous about potential terrorist attacks: “By the time we were in the Philippines, when I looked at this gentleman who’s sitting next to me, who’d devoted so much energy to making a film about me, he cares about what I do, and he’s terrified, and he thinks he’s going to die any minute — how could you not just learn to love him just a little bit?”

In addition to tracking what Williams does today, the film features a tremendous amount of archive footage, drawn from Williams’ many TV and film appearances, some of them quite bizarre, as when he sings the decidedly downbeat song “The Hell of It” (from Phantom of the Paradise) on The Brady Bunch Hour, in a lavish production number featuring showgirls diving into the show’s trademark swimming pool. But nor does it shy away from footage that shows Williams clearly under the influence. “I think it was pretty courageous to allow some pretty horrible footage of me when I was really loaded,” says Williams.

Most wrenching is the scene where Kessler serves up footage from a notorious appearance on The Merv Griffin Show, with Williams aghast at watching the playback. “From the very beginning, the deal that Steve and I had was if I didn’t like something he’d take it out,” he explains. “And when I saw the footage of me watching Merv Griffin, my reaction to it was, ‘That’s horrific! I don’t want my daughter to see that.’ But then I saw the first cut of the film. And I saw that you needed that arc. I mean, that is the most vapid, shallow, arrogant, grandiose little prick, excuse the expression, that you see there on the Merv Griffin Show, and I can’t change it. So what do I get in exchange for everyone knowing about it? Well, it gives you the arc of the film to see where my life is today.”

As the film also makes clear, helping others overcome their addictions (Williams has been clean and sober for over 20 years now), is an important part of Williams’ work today. During our interview, Williams sang a few lines from the film’s theme song, “Still Alive,” which addresses the puzzle of who does—or does not—make it through addiction: “Someone asked me once/where do we go when we arrive/If we’re lucky, when it’s over/the dreamer’s still alive/A blessed mystery/for sweeter souls did not survive.” “That’s exactly what that’s about,” Williams affirms. “Why did I get it, why did I recover from my addiction and other people don’t? Why do those sweeter souls not survive? It’s maybe my favorite line I’ve written in a song in decades. And it’s the saddest. I don’t know. But it’s the people in the entertainment industry that are the addicts who are written about. And the fact is, there’s no real difference between a rock star shooting heroin and winding up in jail over that, and a bored housewife in Ohio drinking Listerine. They’re both medicating their fear and their anxiety and their loneliness.”

In addition to personal appearances, Williams is currently the president of ASCAP, making Kessler’s timing for shooting the film especially fortuitous. “We actually started this five or six years ago,” says Kessler. “I shot for three years and edited for about another year and a half. And in that time Paul became the president of ASCAP and his calendar became…” “…insane,” Williams finishes. “I’m always on airplanes. I’m in DC a lot. In a little over a two-week period I go to Ireland twice. I flew 40,000 miles last November. We couldn’t [have time to] make this picture today.”

Overall, Paul Williams Still Alive is a film of great warmth and good humor; a film that touches on serious subjects, but never takes itself too seriously. “It’s entertaining because it’s funny,” Williams agrees. “So much of our audience has a connection to the songs, but I did an interview with someone who had no awareness of me, and he said ‘I loved the movie. It’s hilarious.’ And the fact that Steve was willing to put in all those little awkward moments, like where I’m going, ‘Wait a minute, you’re interrupting me with this amazing story about my dad, this touching meaningful story about my dad, to ask me about a goddamn talent contest?’ I think it’s very unlike any other documentary that people have ever seen. I think that what winds up on the cutting room floor in most documentaries became center stage [here]. What is so funny about the movie, it’s just us stepping on each other left and right, and somehow we make it through this whole deal. I watched the movie with my daughter and my son. And afterwards my daughter went up to Steve and said, ‘Thank you for this gift of what you’ve given me about my dad’s life. It’s an amazing perspective on who he is now as opposed to who he was.’ And so, my kids’ reaction, that said a lot to me. Any misgivings I had at any point were washed away by that comment.

“And the ultimate message of the film, which is an important message to me, is that recovery works.”