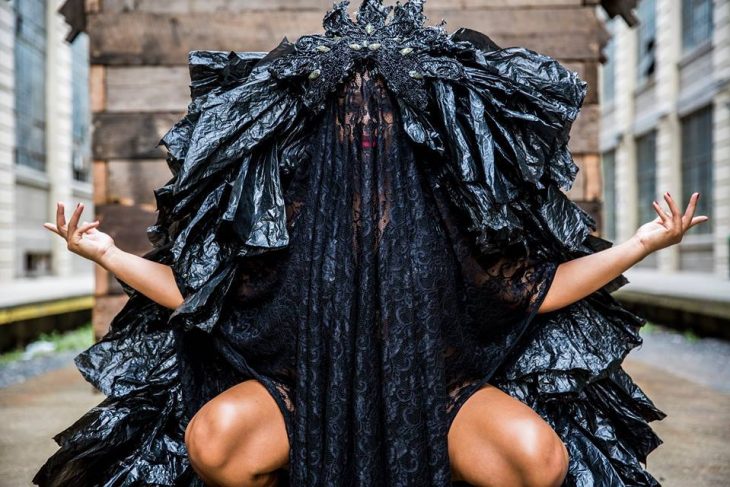 Photo of 'The Bag Lady Manifesta' by Kali-Ma Nazarene

Coralie Fargeat’s genre flick about a brutalized young woman (Matilda Lutz) exacting the title on the men who nearly killed her has been tearing up the festival circuit. Word around the genre-nerd campfire is that Fargeat crafted the most blistering, kinetic synthesis of exploitation and empowerment since, well, maybe ever. If the trailer’s any indication, audiences are in for a helluva ride. —Tony Kay
Grand Illusion Cinema

Glitter-folk elf prince Scott Yoder and his merry band of freaks ride into town for a hero’s welcome after a far-ranging campaign to convert the heathen masses across the land. The well-seasoned band—100 shows in four months!!—promises to be tighter than a lug nut on a tour-van tire. Arrive early for pop-punk trans-warriors Mud On My Bra. —Dan Paulus
Barboza

Former Seattleites La Luz live in LA now, but there’s always been a distinctively Northwest duskiness intermingled with their surf-noir sound. That said, they’re also a hopping live act, with lead singer Shana Cleveland hauling out every great stutter, lick and twang you could hope for from a guitarist. —Tony Kay
The Crocodile, Vera Project

There’s a reason this has been one of the most-produced plays in the country in recent years: it’s dark, profane and hilarious, yes, and it’s also a deep dive into the human psyche. In brief: After his dad dies, Jason joins the Christian Puppet Ministry his mom runs in the basement of their Texas church, where his sock puppet becomes a foul-mouthed creature with a mind of its own. Runs through June 3. —Gemma Wilson
Seattle Public Theatre

I could list the boatload of Paul Simon classics which you could sing every word of. I could enumerate the rarities and deep cuts that, on close listen, often hit just as deep. I could mention his five-decades-long career and his unwavering taste and awareness and integrity. There’s so much I could say about Paul Simon, but the thing to know is that he says this will be his final tour ever.
—Jonathan Zwickel
Key Arena

New York-based artist and activist Taja Lindley launches the national tour of this immersive performance/participatory ritual in Seattle, and we’re lucky to have her. Combining movement, burlesque, text, soundscapes and projection, Lindley will “adorn and activate her Black, queer, female body with trash bags to traverse the dumping grounds and shadow side(s) of herself, the audience and the United States.” —Gemma Wilson
Langston Hughes Performing Arts Institute

Broadway’s vegan metal bar the Highline is a great venue for comedy—the medieval mess hall décor contrasts appealingly with the frivolity of stand-up. A new bimonthly show, produced by standout Claire Webber and up-and-comer Bobby Higley, features a roulette wheel that induces comics to incorporate a randomly chosen kink into their acts. —Brett Hamil
The Highline