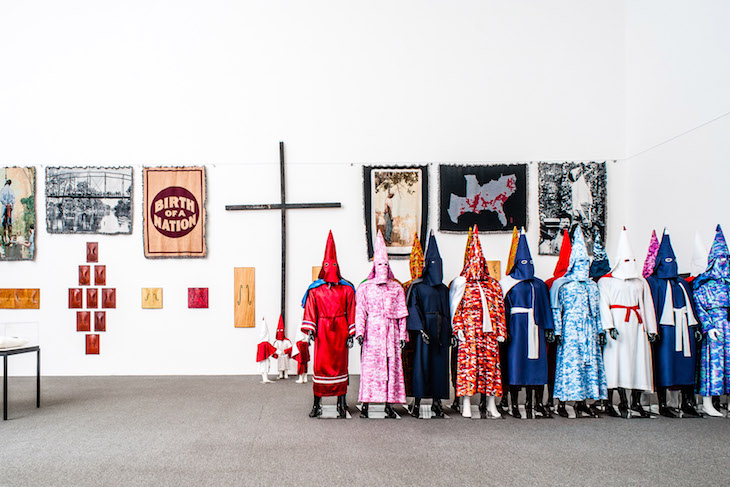 Paul Rucker's 'REWIND' installation at the Baltimore Museum of Art

“I’m ranting, aren’t I?” Paul Rucker asks softly, then apologizes. The Guggenheim Fellow, cellist and multidisciplinary artist, based in Seattle and Baltimore, is not ranting. But he does have a lot to say. Whether he’s jeering at Seattle’s faux-progressiveness, describing how Black people have suffered during the Obama era or pointing out that the U.S. has built a new prison every week since 1976, Rucker consistently calls out violent truths.

The same thread can be derived from his multidisciplinary visual work, an ever-swelling, painful library of historical artifacts such as restraints, branding irons and lynching postcards and installations about slavery, police violence and incarceration. When he layers cello music over a historical time-lapse of prisons built in the U.S. and recasts hand-sewn Ku Klux Klan robes in African kente cloth and camouflage, “showing the stealth power of racism,” Rucker unmasks the myth that history is over.

Now Rucker will expand his commentary to an audience of millions. Today TED announced that the artist is one of their 20 TED Fellows for 2018. He’ll take the TED stage in Vancouver in April, joining a group of more than 450 previous fellows whose ideas have streamed into millions of homes across the world. Ten days later, his work will be part of the inaugural exhibition, Declaration, opening the new Institute for Contemporary Art at VCU in Richmond, Va., where he’ll show some of the roughly 30 new Klan robes he’s been working on, along with historical artifacts and documents that show the vast participation in the Klan, including by women.

Do you have a topic in mind?
I haven’t settled on anything yet. With visual art and music, my process is the same, in terms of being open to exploration and change. If I’m rigid I might miss out on opportunities that arise from exploration. Talks like this can be life-changing. The talk I gave after receiving the Creative Capital award was life-changing. It opened hundreds of doors, and now I’m a full-time artist. I feel this TED fellowship has the potential for opening many more doors.

You were thrust into the national spotlight recently when, 10 days after the white supremacists and neo-Nazi rallies in Charlottesville, York College closed your show REWIND to the public because they deemed it provocative. How do you look back on that?
Not allowing engagement with the public was a missed opportunity. All my shows come with community engagement. I organize talks, concerts, performances, discussions because I believe in engaging with the attendees in the galleries in order to open up conversation around what is often not easy subject matter.

Years ago I got in a heated argument about the prison system with someone who kept saying “I feel,” not “I know.” Which is why I want to give accurate statistics. We have 2.3 million people in prison, over 34,000 youths incarcerated in the United States. If we talk about slavery and the Klan, we also have to admit that the systems and structural aspects of what they wanted then is still in place today.

The school called the exhibit “potentially disturbing.” Isn’t the goal of your work exactly that, to be shocking and violent precisely because history was?
There’s nothing that I’ve created in the gallery that’s more horrifying than what’s outside those doors. The lynchings have not stopped, they’ve merely changed forms—from rope to guns. I created a new piece called “You Might be Disturbed by Images Beyond This Point.” I’ll place it at the exit of every gallery I show at, because I can’t make anything more disturbing than reality.

The Kickstarter campaign to continue touring your art installation REWIND—about U.S. history, race and power—has brought in more than $15,000. Where do you want to take it?
I was blown away by the support for the campaign, and we’re going to keep it going. I’m hoping to bring REWIND to several cities in Louisiana and Florida, where I’ll have residencies next year, and am hoping specifically to bring it to rural areas. Many artists want to go to New York, LA or Chicago, but in a way you preach to the choir there. At the same time, it’s important to note that NYC had a huge slave market. There’s a slave burial ground in Tribeca. So we can’t take them out of the equation, just like we can’t take Seattle out of the equation when it comes to redlining.

“Baltimore is America Amplified,’’ you said recently, because it encapsulates the themes your work addresses. You added that “there are a lot of places where you can avoid talking about these issues.” What about Seattle—has it avoided the real conversation?
Definitely. I love that people acknowledge during public gatherings that we are on Duwamish land, and that we have Indigenous Peoples Day. But if you don’t do anything to actually address what happened, it’s just theatre. There needs to be a real truth and reconciliation process with the Duwamish tribe. There must be truth and reconciliation, too, with the development, and the disproportional way some people are benefiting from the growth while the homeless suffer and people of color are displaced.

It’s great that Seattle, among many “progressive cities,” has signs that say that Black Lives Matter. But guess what? Black jobs matter. If you don’t see Black folks in your workplace, go to HR and ask them why. Black neighbors matter. If you don’t see them in your neighborhood, ask yourself why. It’s about disparity of wealth and a broken system. The mayor in Baltimore, who is a Black woman, can take down Confederate monuments overnight and look like a civil rights hero while vetoing a $15 minimum wage.

You’ve said that we really haven’t done any healing with regard to the legacy of slavery, that we need to cut open the wound and clean it instead of covering it up. Have you come any closer to cleaning the wound?
The wound is getting bigger. It’s festering. That said, one of the biggest gifts of last year is that people can’t deny that we have a problem anymore. And with my work, I have to have faith that I’m laying some groundwork for maybe a couple of lifetimes after mine, so that people can actually move forward. Progress is being made through the pain of reality, through knowing and understanding that we have not gotten as far as we think we have. We can make progress, but we have to engage with people outside of our own communities. If we content ourselves with the fact that our neighborhood is okay, or that our city appears to be okay, we won’t make any progress.