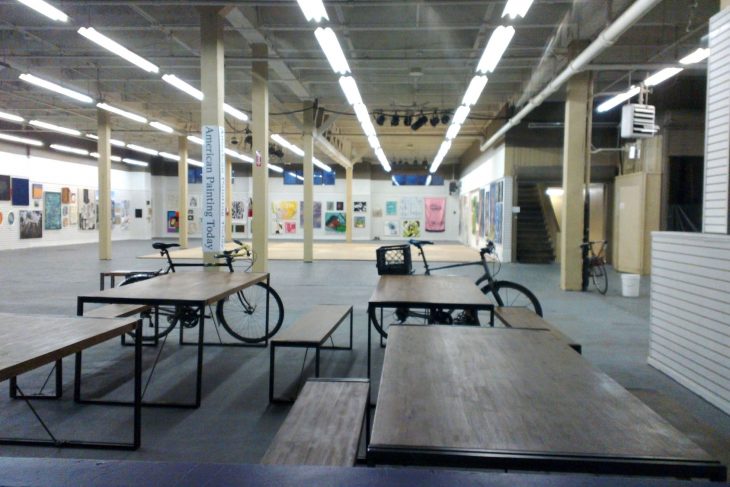 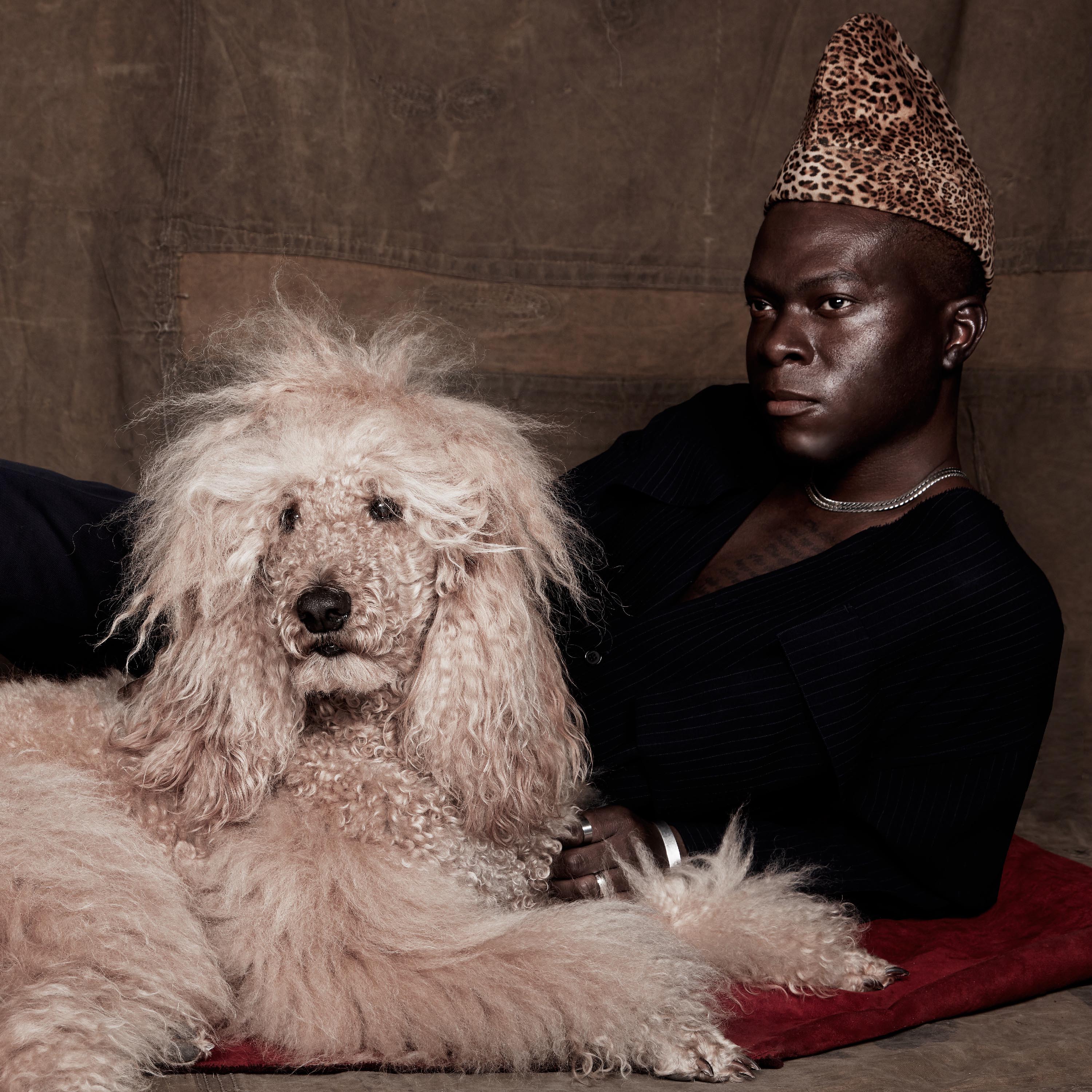 The debate about whether or not painting is dead has continued, with sweeping declarations, for almost 200 years now, yet here were are, surveying American Painting Today. This is the lofty title of a new exhibition in the V2 space on Capitol Hill (opening with a party tonight), hoping to prove that painting is alive and kicking in Seattle.

More than a hundred paintings are hung salon-style across the striped walls of Capitol Hill’s former Value Village, which is living its last days. At the end of this month, the auto row-era building will be redeveloped into office and retail space and the temporary art space there will close. The current walls will not survive—yet for the exhibit, it all started with those off-white wooden walls, formerly hung with second-hand treasures of a newly forgotten past. “The walls are so specific to this place,” says exhibition organizer Matthew Offenbacher. “I thought they would make a visually interesting background for a huge painting exhibit.”

He continues, “Seattle is not often thought of as a great city for painting. I wanted to show the variety of amazing painting that’s being made here.” 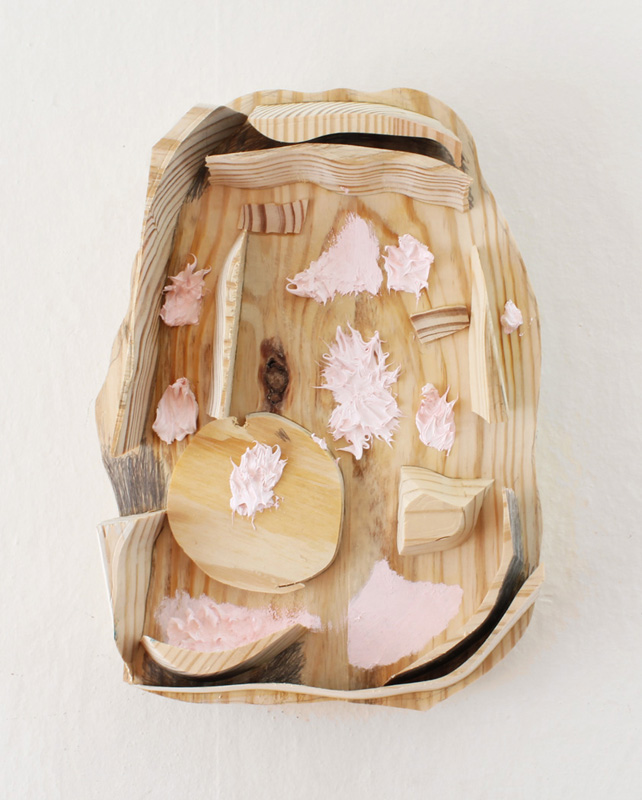 The array of works, in various gradations of abstraction and three-dimensionality, is impressive. Take Emily Gherard’s modest-sized graphite-and-staple painting, tucked away in a corner, or Robin Green’s found cookie sheet, which doubles as a canvas and holds a dried-out, wrinkled white fabric, in turn a background for ink spatters. Julie Alexander uses repurposed fabric to hang her painting, titled “My Ankle Your Foot,” with drapes, like a window. Next to that, two brightly colored wooden bowl-shaped assemblages by Tuan Nguyen are painted in bright colors and dotted with curious sculpted shapes, like sawdust teeth or cotton candy paint drops. 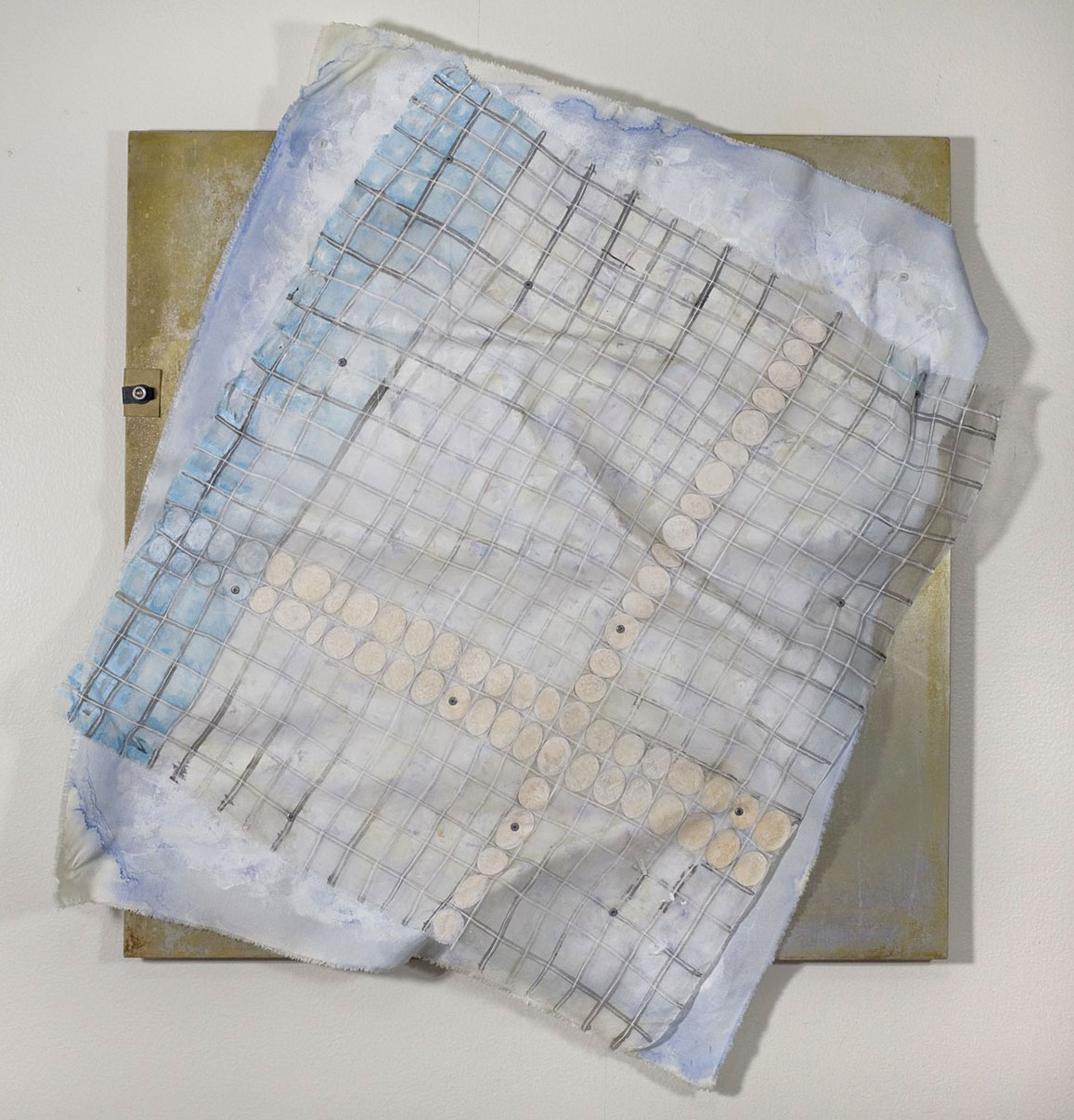 Among the 94 artists included, many seem to take the word painting lightly. That’s a good thing, certainly when Philip Miner does so, with his “Profit, Cher Prophète,” a four-panel ink-jet print on fabric, or Neal Fryett, who used photographic prints clipped to sheets of Arches paper. There are plenty of local luminaries such as Ryan Molenkamp, Francisco Guerrero, Kelly Bjork and Joey Veltkamp (A horse! A rainbow! It’s exactly what the show needs.)

When Offenbacher invited artists to the show, he also asked them to suggest other artists. Every suggestion made it into the exhibition. In the end, he included work from artists he didn’t know at all.

“It was a good way to reach beyond my own circle,” Offenbacher says. He prefers the epithet “organizer” instead of “curator;” for him, the curating was done by the artists. “A curator would have never left so much of it up to chance. That’s why there’s a certain randomness to it. Also: I didn’t plan it as a comprehensive survey.”

American Painting Today is an ambitious title for an exhibition we shouldn’t consider a comprehensive survey, but given Offenbacher’s humor, it comes with a wink.

“If the Whitney Museum in New York organizes a show by the same title, with mostly local—New York—artists, people are totally fine with it,” he says. “The title is a commentary on how local art is marginalized compared to art made in places like New York or Los Angeles.”

Offenbacher, himself a painter, has long explored institutional framing and the power divide between the individual and institutional through writing, actions and exhibitions. Among his recent projects is Deed of Gift, for which he used the $25,000 prize he won from the Neddy Artist Award in 2013 to buy local art with feminist and queer themes to donate to Seattle Art Museum. But the presidential election has left Offenbacher’s context charged: The title and the show became something less ironic and more earnest. Can a group of artists, and by extension American society, come together as a community?

“For me, the social interaction is as important as the paintings,” Offenbacher says. “This show is mainly an attempt at community-building.”

The day a dozen volunteer artists came together to hang the work, Offenbacher didn’t decide precisely where the paintings should go. He instead eschewed traditional curatorial input by presenting artists with an intake form comprised of seven symbols—sunset, mushroom, triangle—and invited them to select the ones they felt related to their work. Later, works were clustered based on chosen symbols.

In these hostile times, American Painting Today should take pride in its literal inclusivity. However, the show’s greatest strength may also be its greatest weakness. A curator’s firm hand might be what this exhibition needed, to group works and filter out lesser paintings. At the same time, the overdose of styles suggests that both painting and community-building are nowhere close to dying. It’s also a reminder that, despite sentiment to the contrary, this will likely not be the last time we’ll be overwhelmed by a staggering amount of art in this hyper-developing city.

All photos courtesy of Matthew Offenbacher.