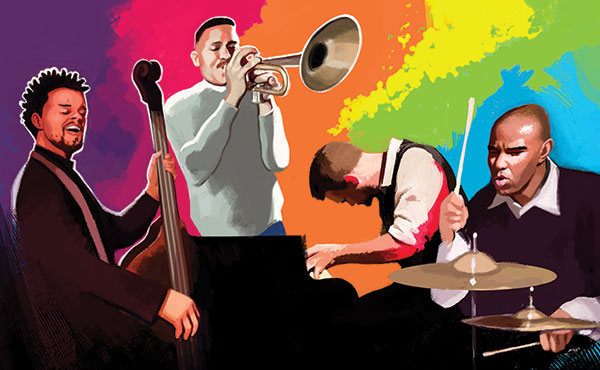 The night tilted toward unpredictable as Industrial Revelation took the stage at the old Comet Tavern, with its broken-down bar stools and broken-down barflies and bouncer missing a tooth taking cash at the door. Clad in ties and polite pastel sweaters, the band had come to play their music at this fraying dive, but the Comet would not accommodate the band without incident.

They started their set a quartet: trumpet, Rhodes electric piano, upright bass and drums, blasting a song that built delicious tension and rose to a golden climax. The Rhodes hummed like an engine at cruising speed, the horn shone like a solid beam of light, drums percolating and distinct, bass alert and proud.

Too proud, maybe. In an instant, something happened, and Evan Flory-Barnes, the big man on the big instrument, suddenly held the neck of his bass at a wrong, violent angle, cracked from its wooden shoulders. He all but dropped the shambles to the floor like a throttled corpse and, ashamed of what he’d done or just mad as hell, ducked off the stage and bolted out the front door. The remaining musicians played on, indifferent to the absence, insistent even on erasing it with more sound for the next 40 minutes.

This, I realized, is the best rock band in Seattle.

Ferocious and loud, with messy feelings all driving at a specific pinpoint of an idea through a process of sonic expansion and contraction, so intent on expression that breakage may occur.

That was in January 2013. In the fall, IR released their third full-length album. It proved the point: These guys fuck with expectations.

Oak Head refines the unhinged energy of their live show, tames it into a more fluid ride. It’s mixed and engineered, a shave of the stubble that might otherwise roughen a live set. But even with its trad-jazz instrumentation, Oak Head rocks (thanks in no small part to Josh Rawlings’ scuzzy, filtered tone on the Rhodes). In this case, it rocks with an instrumental precision and intimacy native to trained jazz guys playing as aggressively and intuitively as any musicians in the city.

At the release of the album, IR left for tour. They spent 10 days circling the Northwest and then returned to Seattle and played a welcome-home show. That night at Vermillion—another unconventional venue melded to IR’s unconventional music—the band was even stronger, bolder than before. Songs from the album were intensified and augmented from the recording. The room echoed, pressurized with kinetic energy, breezy with release.

Industrial Revelation embodies jazz; jazz is meta-musical, embodying everything else. And so IR rocks. But really they’re just virtuoso musicians playing risky and loose. They are a joy to hear. They slide around the music scene, doing the thing they do, mercurial and misplaced and unsung. As outsiders, they fit right in.