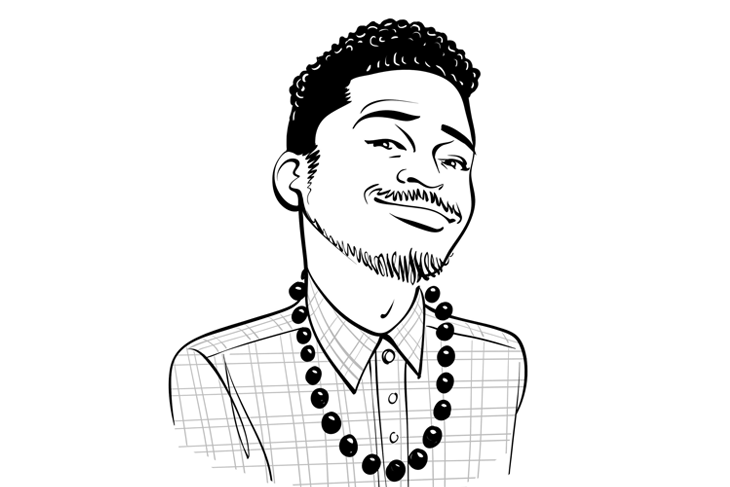 Last month Otieno Terry released his debut solo album, The Woods, a masterful, colorful showcase of the young multi-talent’s prodigious skills as a singer, rapper and producer. This month the Seattle native plays KeyArena as one of Macklemore’s openers. Before all the hoopla, Terry spent years—starting as a teenager—in the city’s hip-hop scene, helping expand it into the spectacularly diverse, inclusive creative community it is today. He’s arrived at the right time with the right gifts.

The album is so diverse, so full of energy and ideas and styles and sounds, so full of you.

Yeah. I really wanted to present myself in all these different facets, because they’re all parts of me and different influences that I’ve gathered over the years. I wanted to give a little bit of that in every song. It’s intentionally eclectic—different pieces of a bigger story, because there’s never been one form or style or genre that I’ve stuck to or found comfort in consistently. So “Ashé” is sort of an electronic-Afrobeat hybrid and “The Other Side (Wrinkles)” is a softer electronic ballad. All of that was inside of me.

Why’d you call it The Woods?

There’s a couple reasons. One is because I live next to Frink Park. It’s just a park, but growing up, every time I looked out the window—specifically the window in my room where I did the project—it looked like I was living right next to the woods. Seattle is a city that was built in a forest. We just colonized the forest. And it still lives, it still breathes, I can still feel life.

The Woods is my homage to the connection with nature and how nature has guided me outside the boundaries that society put me in. A lot of the confusing feelings that I had about myself were clarified through nature and figuring out, like, “Oh, it’s OK to just be you, to follow your heart.” That’s the way out of the madness and the pressure. It’s easier to let go if you just stick to what feels right.

The word ashé has a cool meaning also.

Totally. Ashé means “so be it,” or “amen.” It’s said a lot in a lot of different places across Africa and even in South America. It’s been said in my family and my culture ever since I can remember. I’ve also heard it through capoeira—we say ashé, sort of like, I’m sending good energy. And for me, it’s an affirmation for being myself and following my light. It’s one thing to say you have the right to follow your light but it’s another to confirm and have proof that you can exist. And ashé is that [proof]. It’s real. It’s not just a cliché or something you say. It’s something that you can do. We can change the world with it, or at least you can change yourself with it [laughter]. And maybe that’s enough.

Right now is a good time in Seattle for R&B, hip-hop, future soul.

In such a such a short period of time, I feel like things evolved musically. It’s crazy, in retrospect, seeing all the younger people come up—it’s a really cool experience. It makes things feel more possible because I always felt like a weirdo. It’s a wave and it’s cool to be a part of.

And it leads to playing KeyArena. Are you nervous?

A little bit. To some degree, a stage is a stage, and sometimes the smaller stages are scarier. You can see somebody and look them in the eyes, and you have to be you on a very personal level. It’s harder to fake when somebody’s seeing you. Sometimes bigger is easier.

At the release party [for The Woods], I remember looking at the audience and getting a chance to see everyone. All these people are from completely different places and different walks in my life and different parts of the city. And they’re happy. They’re connecting in this way—something that they can feel through this music is bringing them together. Cornel West said that music is our generation’s last form of religion. It’s our church. It’s what brings us together and how we celebrate. And it’s our catharsis and how we deal with all of this bullshit. So if I can get people in a room to sing together, jump, dance, let out whatever they need to get out, I feel like I’m serving. I’m doing what I’m supposed to do.

Otieno Terry opens for and performs with Macklemore and special guests Sol, Travis Thompson, Xperience and Dave B at Key Arena on Dec. 22 and 23.