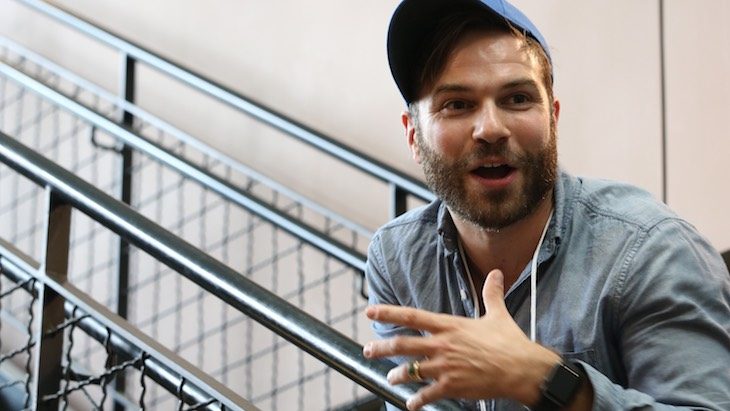 For nine years, One Coast Collaboration has steadily and stealthily been raising the bar for Seattle theater from behind the scenes. The annual, weeklong summer festival is all about artistic cross-pollination, bringing great playwrights from around the country to Seattle to work with local directors and theater companies. “There’s a high priority on fun,” says OCC founding artistic producer Michael Place, because fun is an important part of building relationships, the true building blocks of art.

OCC stays nimble and mobile, popping up places like Whidbey Island and Place’s childhood backyard. This year OCC teamed up with ACT Theatre, and the first-ever ActOne Festival took place last weekend all over the massive ACT complex. Plays by Philip Dawkins, Mara Nelson-Greenberg and 2018 Pulitzer Prize-winner Martyna Majok, along with a musical by Wayne Rawley and Martin Lowe, comprised 2018’s lineup. I chatted with Place about the keeping OCC a low-stress, high-quality artistic playpen.

From year one to year nine of OCC, what’s stayed the same and what’s changed the most?
We didn’t start it with the ambition of becoming an institution. We started it out of a pure joy of making art with our friends and then introducing those friends to other friends around the country, to make our community tighter and bigger and smaller at the same time. That’s the guiding principle, the north star: Who do we want to bring together, what relationships do we think are going to be dynamic and lasting and make for good art? That’s the thing I’m most proud of maintaining over the years.

We’ve also welcomed more institution, and by that I mean we’re more organized, we’re raising a lot more money, we’re paying people, we’re marketing and advertising in ways we never did before. It’s gotten a lot more professional in every definition of the word is maybe the one thing that’s changed. We started out as this kind of dinner-party festival, and now we’re trying to retain the dinner party but fit in a package that matches the professional nature of all the artists involved. I feel like that’s been the ultimate question: What’s the core of what we’re trying to preserve here?

How do you select the participants and how do you do your matchmaking between playwright and director?
We’ve found that it’s most fruitful when [the paired artists are] peers. A lot of it is instinct and interpersonal dynamics of, like, these people share common interests but don’t know each other. It’s great when there’s some sort of close degree of separation, where maybe there’s a lot of people in the Venn Diagram of their friendship or professional circles but they themselves haven’t had a chance yet to connect. So it’s like, who are you going to sit next to each other at a dinner party? Who’s gonna have a good conversation, who’s gonna complement each other and also share enough common ground that they’ll have plenty to talk about?

A lot of it is found through our communities. We don’t have people do submissions and we’re not reading 100 plays to determine the three best plays or people or whatever. We’ve just found that when we’ve fallen in love with a playwright…say Dipika Guha, who’s been to the festival four times. I’ll talk to Dipika about who she’s reading or who she’s excited about. From there we find Mfoniso Udofia and now we have Mfonisa in our community. Then we’re like, “Mfoniso, who are you reading?” And our community grows that way. Since we’re all sharing housing, we’re trying to create a weekend of a lot of social and creative events, and the hope is that everyone has fun together and that it doesn’t feel like an isolated experience.

Is that how you keep the OCC community alive year-round?
That’s the hope! My favorite example of that is that when Martyna Majok got married she asked Caitlin Sullivan to be one of her bridesmaids, and they met at the festival! It’s so rewarding for me that their relationship has nothing to do with me anymore. [laughs] A good party where you meet cool people—that’s what I want OCC to be. Having it become more professionally viable has been cool as we learn and grow and expand, and this collaboration with ACT is a tremendous step forward in that regard, and one that gives us a lot more exposure, too. We’ve been so private and in-house, the exposure the festival is going to gain with this new branding is going to help us grow exponentially over the next five years.

Is there a five-year commitment?
There’s no formal commitment, but there is an intention with both institutions to keep this going. We’re already talking about next year and we do have a three-year plan, but it’s so brand-new that we’re like, let’s just do it and we’ll find out.

But we already have paperwork about dynamics for next year and things we want to change, people we’re interested in bringing in. And ACT—this isn’t necessarily a formal commitment on their part but it’s an articulated commitment that they’d be eager to share, but they hope to source mainstage productions from this festival. That’s another extra layer in terms of professional opportunities that we’re providing these playwrights in Seattle. That’s a step ACT is helping us take that we couldn’t do on our own. We can expose Intiman and ACT and the Rep to these writers and sometimes that will lead to something. The Great Leap, Lauren Yee’s play that was at the festival and on the Rep mainstage the following year, is an awesome example of that—she comes into the community, gets momentum and gets picked up by a bigger house. But these direct relationships are hopefully going to lead to a ton more of these great playwrights thinking of Seattle as a second artistic home.

OCC does such cool work, but it’s so hard to write about because there’s no public-facing element. Have you gotten pressure to do public performances so you can raise the company’s profile or raise money?
Yeah, that’s been a huge challenge. It’s been sort of two-fold: One has been that we’re not exposed to public audiences, so when we approach donors—which we do, and we’ve had success with to a point—very, very few of them have attended the festival and been inspired by what they’ve seen, which might motivate their participation. We have a couple larger donors we hope will continue to invest in what we’re doing and building. We’ve also done some crowd-sourcing stuff, we’ve done events in the past, we’ve done a letter campaign. We’ve tried to diversify how we fundraise. Crowdsourcing year to year isn’t something we intend to do, because we don’t want to put a strain on any one aspect of our community. We’ve had a number of playwrights donate over the years, which is really cool—they get a big grant or get a TV writing job and they’re like hey I really believe in what you’re doing, you helped me when I really needed it, so I’m gonna write you this check now. That’s been awesome.

ACT is such a big institution, but with the 29-hour contact from [Actor’s] Equity we can’t advertise or sell tickets. We can only do personal invites, which is great. It’s a nice transition period from doing things so in-house to now doing something that’s still private but has more space to welcome more people. In the past we’ve done an excerpt model where we’ve done like 15–25 minutes of each play all in the same night, which has created a kind of zeitgeist feeling, with all the artists sharing their work at the very end, all taking a risk together, all being vulnerable together. This year, with ACT’s objective of sourcing plays for their mainstage, potentially, we’re doing full readings. There is a lot of change this year, but it’s been cool to have it teach us. And we’re still having fun doing it.