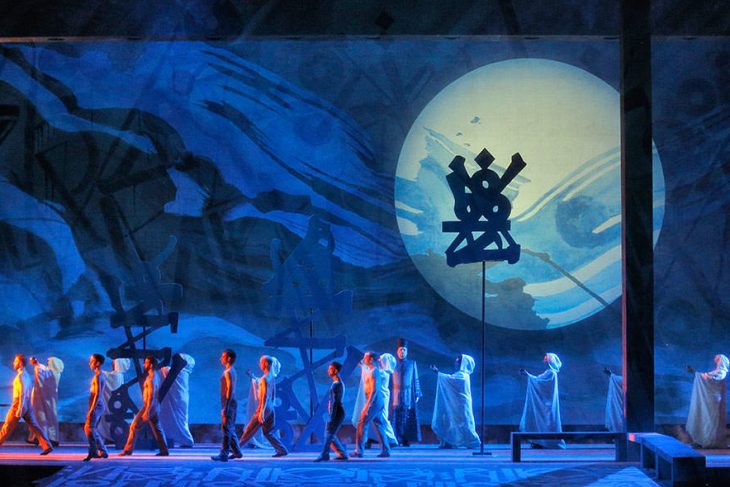 When a stage director takes on someone else’s production, does the new director take over the creation and replicate it, or do they bring different ideas to add to the original? I asked this question of E. Loren Meeker, who directs Seattle Opera’s upcoming presentation of Verdi‘s Aida, opening May 5. The original production, which premiered last year in San Francisco and Washington D.C., was the brainchild of internationally acclaimed stage director Francesca Zambello.

“I have worked closely with Francesca since the conceptual phase of this Aida,” Meeker says. “This production [in Seattle] builds upon the work we’ve done at San Francisco Opera and Washington National Opera. As a creative team, we never stop. We are always looking for ways to strengthen the production. It’s an ongoing process that begins with the original ideas we developed three years ago and grows as we dive more deeply into the piece with each new company.”

The story of Aida, briefly, is a love triangle within warring countries, originally Egypt and Ethiopia. Aida, a captured Ethiopian princess, is slave to Amneris, princess of Egypt. Both women are in love with Amneris’ army commander, Radames, who is in love with Aida.

After Aida’s father, Amonasro, is captured in battle, he persuades the Egyptian king to release some Ethiopian prisoners; after those ex-prisoners revolt, Amonasro persuades Aida to find out Radames’ plans for retaliation. Aida is conflicted, Radames is conflicted, Amneris is jealous, and it all ends in tragedy, to glorious music with magnificent choruses, spectacular ballets and a triumphal march.

Zambello chose to give the opera a contemporary setting in no specific locale, to let the production be more intimate, thus allowing the audience to examine the personal and interpersonal relationships involved and how the larger idea of war and cultural clash affect those intimate relationships. That doesn’t mean Verdi’s magnificent choruses or triumphal march will be missing, nor will the opera’s ballet sequences. Indeed, there will be more dance than usual, choreographed by Jessica Lang (a frequent collaborator with Pacific Northwest Ballet), whose style Zambello found fitting for this production.

“Francesca wanted the movement in the opera to have a contemporary vision, not only with the written ballets but extended throughout the production, giving the opera a beautiful, abstract physical life as a through-motif,” Meeker says.

For a visual designer, Zambello chose RETNA, who started working as a graffiti artist as a teenager in Los Angeles and now exhibits around the world. RETNA has long had a fascination with alphabets of all kinds, and his imaginative and interpretive use of Egyptian hieroglyphics “spoke very clearly to the team as a modern perspective and a good marriage for this production,” Meeker says. To help translate RETNA’s visual artistry into theatrical scenery, Michael Yeargan came on board as the set designer.

“Michael collaborated with RETNA to create an environment where RETNA’s unique, bold style would set the visual and dramatic tone for the production,” Meeker says. “So, we have two artists with different backgrounds, one a visual artist and one a scenic artist, whose strengths were combined to create an arresting piece of theatre.

“The ultimate goal of theatre is to be a collaborative art form,” she continues. “There’s a layering process from the birth of the co-production, to gathering the best artists for the team, to developing a concept, to seeing those ideas come to life with the cast, music director and orchestra. It’s wonderful to be involved with a production where so many unique and highly artistic minds create a remarkable work of art for the stage through collaboration.”