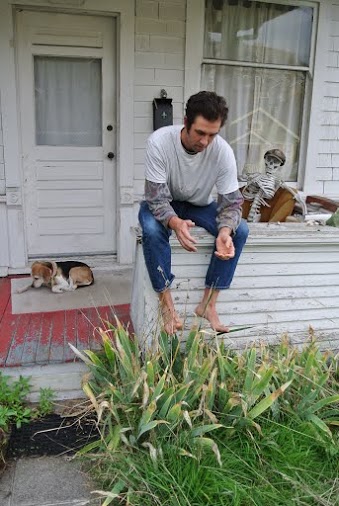 If you’ve heard Omar Schambacher’s band Great Spiders, you know that their songs are as persistent as their creator: undeniable pop masterworks with catchy choruses and hooky leads, lyrics inscrutable enough for the background yet thoughtful enough for the fore.

If you haven’t heard of Great Spiders, well, that’s not so surprising.

“If I haven’t made much of a dent in the music world, it’s because I’m not prolific,” says Schambacher, sitting outside on an unseasonably warm autumn afternoon. “Thus far.”

Until eight months ago, the band had virtually no Internet presence; only six songs are available online. In eight years, Great Spiders’ only release has been a 7” in 2008. In the same span of time a remarkable 31 different band members have come and gone. (The current lineup has been stable for the last year or so: drummer Aaron O’Neill, with whom Schambacher plays in Star Anna, original La Luz bassist Abbey Blackwell, Killer Ghost’s Sharif Elassiouti on rhythm guitar and Patrick Latham on keys.)

With disarming candor Schambacher, who writes and records all Great Spiders’ music himself, admits that it’s mostly ego and self-criticism that have prevented him from releasing more frequently. “I have about 12 more songs that are done and about 50 ideas,” he says. “Then I go mull over it and over it. I get bummed on that. Mostly it’s the drums, the production, and my voice. I hate my voice.”

When someone posted the music video for Great Spiders song “Bailey” (screened at the last Videoasis) on Facebook, Schambacher left the comment, “Thanks for diggin! I still think there’s a little too much mid-range.”

Such fretfulness is surprising coming from a musician as experienced as Schambacher, who figures that, added all together, he’s spent a full year of his life playing the guitar. After a brief college stint, he moved to Seattle from his native Ellensburg in 2003 to play the casino circuit with a Top 40 cover band, an experience he describes as invaluable—and for someone as fanatical about pop music as Schambacher, perhaps inevitable.

“I don’t listen to that much noise, or psych, or indie, or punk—I listen to fuckin’ cuts,” he says. “When my friends were listening to Circle Jerks and stuff in high school, I was listening to Madonna’s ‘Like a Prayer.’ That’s the thing about pop: I don’t see it as a joke.”

That earnest goofiness is a big part of what makes Great Spiders so great. During live sets, Schambacher likes to introduce songs by saying things like: “This next one’s sort of punk,” “This is kind of a country song,” or “We’re gonna slow things down with sort of an R&B number.” Great Spiders isn’t particularly concerned with genre adherence; if there is anything that makes the songs cohesive is the expert songwriting and arrangement.

“Bailey” opens with an acoustic guitar strumming a chord progression that creates nostalgic tension reified by the opening lyrics: “Never forget your warmth / Never forget your skin.” A reverb-y and distant-sounding voice calls out, “Bailey,” in response to a gently bent guitar note. The song is evocative, swelling and swooning along a subdued drum arrangement. When Schambacher talks about music, he speaks covetously of what he calls “tasteful” guitar playing and seductive melodies. His concern seems to be creating music that is accessible beyond being recognizably referent to any one artist, genre or moment. And to that end, Great Spiders is wildly successful.

Great Spiders performs Saturday, Nov. 28 at Redwood. Keep your eyes peeled for a cassette reissue of the Great Spiders 7”, out this January through Sands Vacation. Also totally worth your time: Schambacher’s bizarre faux-radio spots. Enjoy.