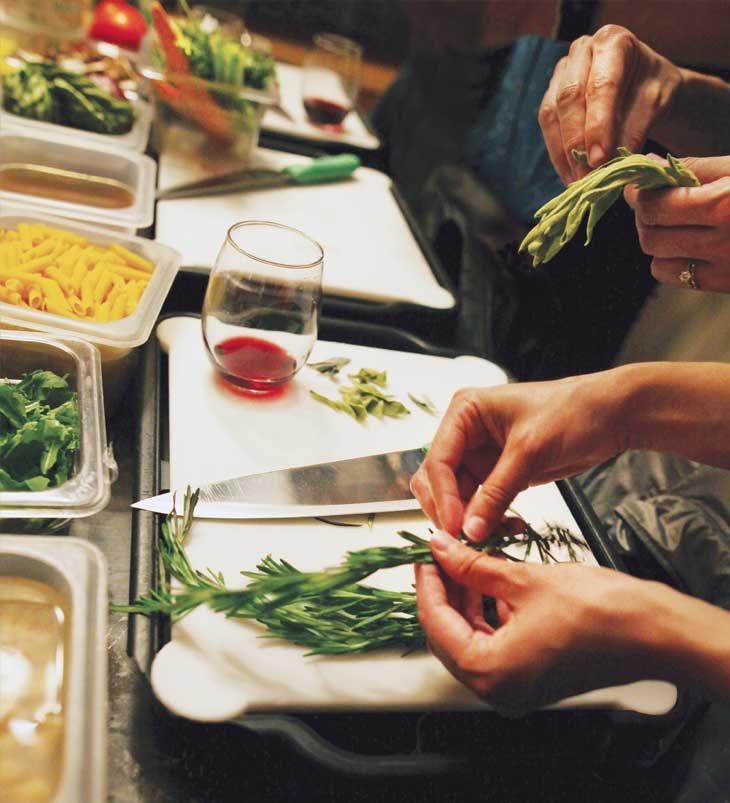 Cooking classes at Luigi’s last two-plus hours and result in a five-course meal shared family-style at the kitchen table. The experience pairs nicely with an Italian red. Photos by Kelly O

On the northern edge of Pioneer Square, where Cherry Street runs into 1st Avenue, lies the seat of an ancient empire, a crossroads of commerce, cuisine, information and ideas disguised as a casual Italian restaurant. Right now it’s hidden behind mounds of excavated earth, reels of hurricane fencing and stacks of pipes that have further disrupted this mercurial neighborhood—which begrudgingly endured the buildout of the Alaskan Way Tunnel just a couple years ago—and yet it bustles with unpredictable urban energy. It’s called Luigi’s Italian Eatery and Cantina and it’s a bastion of the kind of straightforward, full-flavored, pretense-free dining that’s all but extinct in these artisanal New Seattle times.

Luigi’s is also more than a restaurant. It’s a clubhouse for neighborhood denizens, a place to breeze into for an aperitivo after work or during an evening Art Walk stroll. With mismatched furniture, cookbooks stacked here and there and walls adorned with indeterminate personal photos and kitschy store-bought décor, it feels like your East Coast aunt’s suburban home reconfigured inside a 112-year-old brick building; its tight confines contain the equivalents of a kitchen, dining room, living room, library, den and bar. Its locale makes it a tourist stop, a destination for cruise-shippers and sightseers looking for familiar dishes carefully executed in a low-key environment. And six nights a week it’s the cozy classroom for a series of Italian cooking classes, taught by a learned rascal named Bill who’s most accurately imagined as a Borscht Belt version of the Frugal Gourmet. (More on that in a minute.)

In a less obvious, more symbolic way, Luigi’s is something of a spiritual archive, a storehouse of civic memory dating to at least the early ’00s. Back then, Luigi DeNunzio—chef, entrepreneur, raconteur, neighborhood activist; sporting a white, tobacco-stained walrus mustache, white fedora and curlicue Pugliese accent, himself an anachronistic product of another place and time—called Pioneer Square, not unironically, Seattle’s Little Italy. Over a couple decades, DeNunzio owned four different restaurant locations that went by several different names, including Café Bengodi and Al Boccalino. Now, after DeNunzio’s passing in 2017, his wife Angela oversees the two remainders, Luigi’s, which opened in its current space in 2016, and, down 1st Avenue, Che Sara Sara. Just as in DeNunzio’s day, these places exist to impart his version of la dolce vita to a Seattle that desperately needs to loosen up, Italian style.

All this delicious, convivial history operates under the hotspot radar. It will remain that way, comfortable in its culinary classicism, while the rest of the city chases fickle foodie trends. This confident lack of concern is the true essence of cool.

There are two ways to get the full Luigi’s experience and both are worthwhile. The first is Luigi’s cooking classes. I took one in the spring and for weeks couldn’t stop thinking about it. The dishes we cooked—creamy polenta, herb-crusted roast pork over braised sweet onions, pasta Assisi (a hearty stew with extruded pasta and veggies), bitter-greens salad and tiramisu—are all hearty, tasty meal staples. I immediately applied many of the general tips and tricks I learned to subsequent kitchen endeavors. Mainly I obsessed over Luigi’s cooking class because the instructor is a singular character whose delivery of what he calls “cooking 101” was basically a theatrical monologue packed with as much broad humor as sharp insight. For two hours, Bill Dale embodied both the artfulness and honor of knowing your way around a kitchen.

Put simply, one doesn’t encounter folks like Dale often. At 62 years old, the man is a well-traveled, well-trained kitchen rat who’s spent the majority of his life in restaurants, washing dishes, serving, line cooking, sous chefing, managing, the works. Growing up in Rhode Island, he discovered early that he was allergic to everything on the family farm—the animals, the hay, the hard work—which landed him at his English grand-mother’s side in the kitchen. He’s cooked in a dozen states under some recognized masters and came out of retirement to teach at Luigi’s four years ago. He speaks with a rusty, almost cartoonish rasp; he might be missing a bottom tooth.

He’s cooked the cuisines of the world, he says, French and Thai and Indian and Ethiopian, but Italian cooking is the foundation of modern dining as we know it. Italians are the world’s greatest shoppers because they know what to bring home: dried pasta from Arabia, garlic from Asia, tomatoes from the New World. Describing himself as “a well of near-useless information,” he’ll show you the right way to cut an onion or cook a carrot or add salt to a dish—basic stuff that, if you’ve never been told, comes as a revelation. He’ll do so while peering conspiratorially over wire-rim glasses, as if sharing some arcane bit of esoteric lore, which he is.

“I’m old, I’m cheap and I’m lazy,” he told my eight-person class, and then convincingly demonstrated to us that those were positive attributes in the kitchen.

I won’t try to transcribe his one-liners here because the effect was mostly in the delivery (And also in the setting. Humor in the classroom always helps the lesson). Instead I’ll tell you that I entered the class a decent cook and left a better one; also, immensely gratified for being talked through the orchestration of a five-course meal by an expert chef with an admitted penchant for stage acting. Classes book out early, so sign up now.

The other means to the full Luigi’s experience is eating at the restaurant.

The key here is to put yourself in their hands. Order the chef’s menu, name your price and let the kitchen prepare a meal according to what’s fresh, in season, top of mind. Unlike more precious establishments, you will not be told the provenance of each and every ingredient, which is fine, because you trust these people and the food is good.

My dinner a few weeks ago lasted two lovely, wine-washed hours and included caprese salad, a salumi plate, broiled sardines, squid ink pasta, four-cheese polenta, roasted quail, branzino, swordfish piccata and, for dessert, something called chocolate salami (seriously). It was rustic, easy, impeccable. Luigi might be gone but he brought the Old World to Seattle before he left, and there’s plenty about it to learn from.