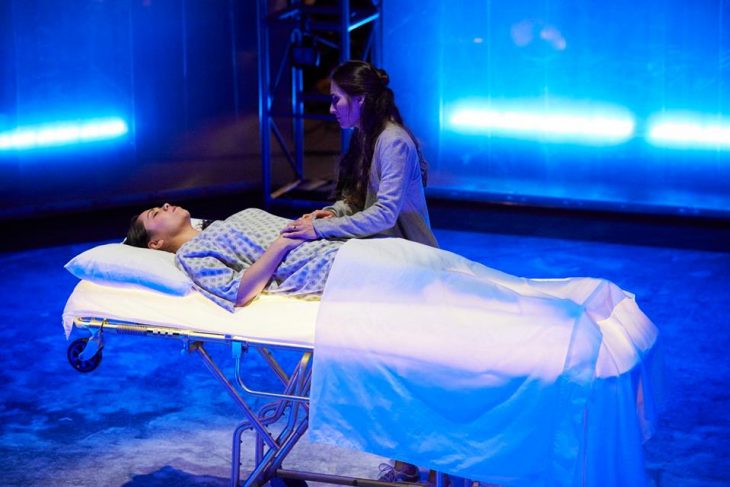 Five minutes into my conversation with stage director Kelly Kitchens about her latest project, O+E, running through this weekend at Seattle Opera, I’ve taken a hard, emotional left, from roaring laughter to earnest silence to hide the fact I might cry.

“We’ve all wanted a second chance,” she says. “There was a loss suffered, whether that’s a spouse, as in this case, or a sibling, a parent, or a child, god forbid, and we would do anything, anything, to have one more moment with them. This opera offers that fantasy fulfillment—the grief and the love, the adventure story, if you will, that that could be possible. It’s the capriciousness of the gods. Who gets a second chance?”

Variations exist even among Greek versions of the Orpheus myth, but the framework remains the same: On Orpheus and Eurydice’s wedding day, Eurydice dies. Orpheus, the most perfect musician in the world, sings of his grief, and so moves the gods that he’s allowed into the underworld to plead his case to Hades. Hades tells him that if he can lead Eurydice out of the underworld and into the land of the living without once looking back to make sure she’s behind him, she can stay with him. That original version, Kitchens says, “ends very, very poorly.”

In Kitchens and Yates’ adaptation, O is still a phenomenal musician, but now E is a fighter pilot, a soldier who has fought valiantly for her country. Both O and E are women, as is the character Amore, who in Gluck’s opera is the God who tells Orpheus he may travel to the underworld in pursuit of his beloved. In O+E, Amore again holds E’s life or death in her hands, but in this case, she’s a surgeon.

It’s no accident that Julia Hayes Welch’s scenic design resembles an operating theatre. “About four years ago, we got a diagnosis that could have altered our family quite a bit, or potentially severed our little family of two,” Kitchens says. Her experience in that liminal space, that interminable, sterile, seething hush of hospital waiting rooms, inspired this conception of Orpheus’s journey through hell for love.

“Our [version] is not about looking back,” Yates says to Kitchens. “Because you’ve laid ambiguity over parts of the story like the ending, you’ve woven it slightly differently, so the bumps don’t come in the same place, and I’m no longer obsessed by whether or not I want to forgive O and E for acting so dumb down there! Usually, when you read the myth you’re like, just look ahead—you had one job! But we don’t have that sense in this version.”

In this version, the landscape of hell is psychological, so the story unfolds spherically rather than linearly. O is in the waiting room as E goes under Amore’s knife, and when you’re on that precipice, Kitchens says, it’s natural to catastrophize and fantasize, to play out best and worst outcomes. When O falls asleep, we enter the realm of “what ifs” and “remember whens,” a nightmare world that is O’s personal hell. A war zone conflated with a hospital scene. O and E’s wedding day. The hurting human souls that are this hell’s Furies. A peaceful, quiet, ordinary morning together.

As for conceiving of all three main roles as women, Kitchens is very clear in her dedication to representation, both on stage and off. Offstage, her top-tier creative team is all female. On stage, in these days of rollbacks on LGBTQ+ rights, showing two women in a loving marriage isn’t just honest, it’s urgent. Musically, the choice is also logical.

“Opera has enjoyed 400 years of very comfortable gender bending,” Yates says. “We’ve always been fluid.” Pants roles, in which young male characters are sung by mezzo-sopranos, are common. The role of Orpheus was written to be sung by a castrato—an Italian tradition that horrified the French, Yates explains, and so was rewritten for tenor voice in the French update that premiered in 1774, 12 years after the original. Today, she says, the opera’s three leads are almost always sung by women, but the character of Orpheus remains male. “We have women now who sing the heroes, but they do it in drag,” she says. “For the first time that we know of, we have embraced the bend and released the drag—a woman is singing the part of a woman, as a woman.”

“It’s not revolutionary!” Kitchens laughs, to which Yates replies, “But there are conductors who would be apoplectic that we’re just letting it be what it is!”

When it comes to this kind of un-revelatory revolution, in which a creative team plants a flag saying that, on their watch, civil and social progress will only move forward, we’re all in it together. That’s why Welch’s set design reflects the expansive communality of Greek amphitheaters, in which the steeply raked seats put everyone in close to the action—and also close to each other.