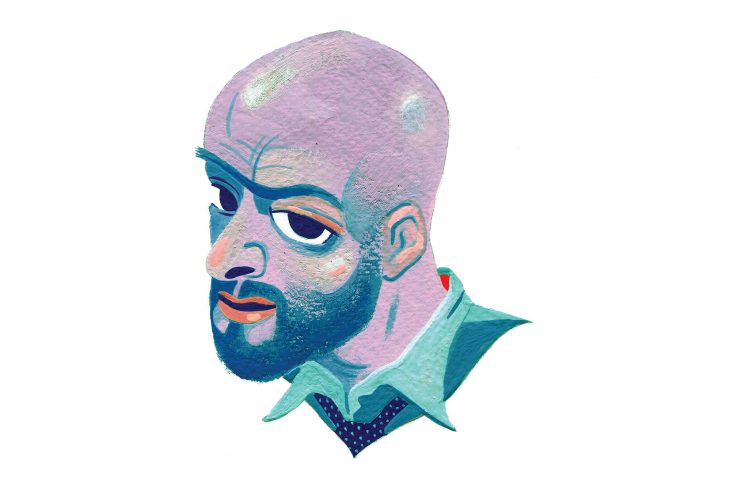 When Dion Boucicault’s play The Octoroon opened in 1859, New York audiences devoured the story of illicit love between a Louisiana plantation owner and a genteel, one-eighth Black Southern woman. In 2014, Branden Jacobs-Jenkins electrified off-Broadway theatre with An Octoroon, an eviscerating, bizarre and hilarious transmutation of that original piece. In Seattle, Brandon J. Simmons, esteemed actor, playwright and cofounder of the Chekhov-centric theatre company The Seagull Project, is now turning his considerable artistic rigor and curiosity to directing An Octoroon at ArtsWest.

How did An Octoroon first cross your path?
I first saw it at Mixed Blood Theatre in Minneapolis and I didn’t know anything about it before I went. It was the first time I’d seen a play that I felt was exactly the kind of play that I want, as an audience member, as a director, as a writer. I had just closed my play Is She Dead Yet? so I was deeply jealous but also thinking, “He’s working on what I’m working on.” It’s a bold, weird, hugely theatrical play. He’s taken this 1859 melodrama, he’s pulled it apart, mixed up all the racial performances, thrown in Br’er Rabbit, put a live musician onstage, and said, “Here you go, world, make something of this.”

When it comes to the script, how much is prescribed and how much is left up to you?
[The writer] actually cedes a great deal of control to the producers and the directors of the piece. He contradicts himself within the text of the play. He’s an artist who I think wants to have his cake and eat it too. There’s an extent to which he’s winking at the audience, like, “Just try to pin me down. I dare you.”

An Octoroon reminded me of Is She Dead Yet? in some ways, filtering an extant work through all these highly theatrical, hyper-academic ideas and references.
I felt that when I saw it. He’s combining things in very different ways than I am. My attempt in Is She Dead Yet? was to translate Euripides’ play almost beat by beat, scene by scene, through a sort of funhouse mirror. An Octoroon is…I hesitate to use the word “deconstruction,” because that word gets thrown around, but it’s a complete recombination. [Jacobs-Jenkins] takes big, unwieldy symbols and ideas and lets them run in a script, and trusts a director, ensemble and designers to start to circumscribe them a little bit so that an audience can receive them without being overwhelmed. Like blackface…he just sort of puts it on stage. Br’er Rabbit is the perfect example. Br’er Rabbit’s presence in the play is never explained. He’s sort of observing the action, and then observing the audience. But [Jacobs-Jenkins] doesn’t tell you what Br’er Rabbit is for, or how Br’er Rabbit functions in the play. He trusts a director and the performer to make a bold choice with it.

Is it freeing or overwhelming to have that sort of latitude?
For me, it’s thrilling because I know exactly what I want to do. I’m interested in movement and music, building moments and combining moments into beautiful images. For me, at the end of the day, as long as it’s grounded and specific and there’s a choice being made that’s being pursued to its logical extreme, or just to its logical end, that’s exciting and interesting. And it’ll be up to an audience to determine whether it’s effective.

What are you reading in preparation for this?
I spent the whole summer reading some of the books Branden was reading when he was writing the play. One is The Melodramatic Imagination by Peter Brooks—he’s looking at the novel, but he also talks about the stage conventions of melodrama. There’s a couple of really beautiful ideas from that book that translate directly into how we approach this piece. Specifically, the idea that melodrama exerts a self-conscious and obvious, contrived pressure on every element of the craft, to extract from it all of its secrets. We think of melodrama as big gestures, sloppy and messy, sort of like, “Woe is me!” and flinging myself on a divan. But Branden’s talking about how actually it’s this almost scientific approach to extract the sacred. It’s not meant to be naturalistic.

Some Americans were raised with this idea of this epic American mode of eagles and cannons, stars and stripes, the Battle Hymn of the Republic, the Civil War, manifest destiny. And then there’s this sort of pastoral mode, and then there’s this folk-frontier mode of, like, Daniel Boone. These are big modes. Branden is saying, no, it’s not any of those. We’re stuck in a melodrama, and because we’re in this culture that we’re in, we don’t even understand what that means. We think melodrama is this sloppy, messy, over-the-top thing. But it is, in fact, a melodrama in which everyone feels incredible pressure at all times to perform their race. And that’s the pressure that’s getting exerted in America: Perform. Perform as a good white person, perform as a woman, perform as a man, perform as a Black person, perform as a XYZ. And then when we don’t perform that way, all eyes are on us, and there’s a different kind of pressure.

He shows us that pressure throughout this play, in amazing ways. Every racial performance in the play is undermined or turned on its head in some way. And it’s funny, it’s tragic, it’s weird and it’s fucking confusing. But it’s a play that just shoots you out of the theater like a cannon, and it’s just beautiful in that way, it’s like a supercharge of oxygenating energy.

How do you mean?
I was an actor throughout my 20s. And then, when I turned 30, I co-founded the Seagull Project and wrote my first play all in the same year. And it was a major shift. I feel like it was sort of like multi-year apprenticeship in producing and directing and writing. But all along, I’ve been a director, and it’s the only discipline in theatre that I feel absolutely 100 percent is what I’m on this earth to do. I’m a competent actor, and sometimes I’m a good actor, but I’ve always been really ambivalent about it.

Really? Why?
Even when I was a very, very young actor, there was always an aching for me to be the director of whatever piece I’m in, even if I’m working with wonderful directors, that I think does undermine my ability to really turn up as an actor. And, I’m not giving up acting. Acting is how I’ve built a community, and how I’ve built a reputation, and how I’ve met and learned from so many artists. But it’s funny, whenever I think of like who my greatest inspiration is, it’s never theatre artists, it’s always Stanley Kubrick. He made one film every seven or eight years, sometimes every 10 years, later in his career. Or Terrence Malick. These artists who really just sit back for a while, dream, and then put something together very meticulously. I love that way of working.

Rather than the prolific model of generate, generate, generate?
I’m afraid of that. It’s interesting, now, I’m starting to feel that I’m moving into a very productive phase. I’m starting to feel more and more people coming to me with stuff. It’s exciting to have that energy coming toward you, but I’m also really finding the boundary of saying “no thank you,” “yes, and I’m nervous,” or just “yes.” That can feel like success, but it can also take me out of the long game that I’m playing. Because I really am playing for my 60s. I’m playing for doing really good work in my 50s and 60s. And that’s really exciting for me.