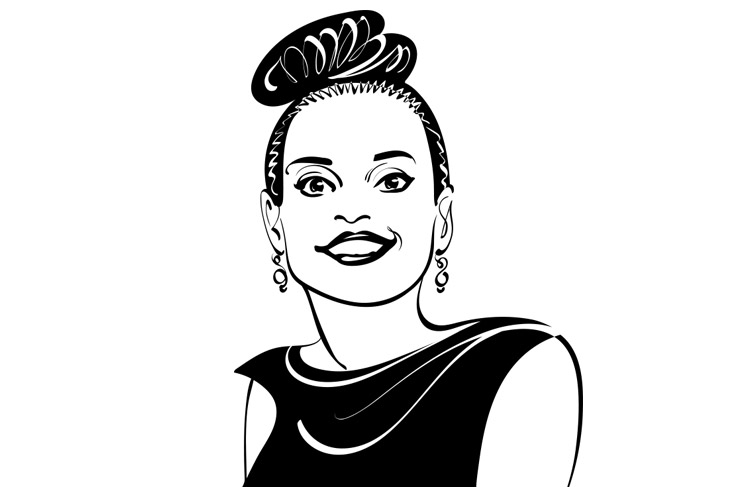 ChrisTiana ObeySumner took the summer off of classes—they’re getting a Master’s degree (their second) in public administration at Seattle University—to work more and read books, one of which is the dictionary. Why? To color code words that have implicit racial connotations, whether positive or negative. The laborious process seems a fitting encapsulation of ObeySumner’s insatiable intellectual appetite. They love thinking and learning and talking and sharing—storytelling is the basis for all their work as an equity consultant, whether sharing their own stories or eliciting others’. In early 2018, ObeySumner was hired as the social impact consultant for Seattle Opera, which this month kicks off its 2018–19 season with Gershwin’s Porgy and Bess.

How do you start social impact work with an arts organization that focuses on opera, often a huge institutional ship with a lot of “canonical” work?
I’ve said this before, but I really believe that if Mozart and Verdi and Beethoven and Bach were alive today they would support social equity in these spaces, because I believe that all art forms, but especially the opera, is extremely socio-political. There’s no way you can make me believe these people wrote these librettos with these messages simply because they wanted the music to sound pretty. Listen to the lyrics. Listen to what they’re saying, how they’re saying it, what the characters are trying to convey and the interpersonal connections between them. No matter how old [a piece] is, it has themes that can be applicable throughout time.

What kind of themes do you mean?
Like this Porgy and Bess. You think about Crown and Bess’s relationship. Maybe it was trying to convey a different message when Gershwin was interpreting his observations of the Gullah Geechee people. Today, though, that relationship feels applicable to the #MeToo movement, especially as we start to hear more of what I always felt Tarana Burke originally meant, which is an eternal pandemic of sexual assault toward women and femme bodies. And there are certain cultural complications that happen within certain communities, especially communities of color.

As someone who also can say, “me too,” I’ve had those experiences where, in sharing my experience or frustration or fear or trying to report, it’s been minimized or completely dismissed because they’re like, “You can’t call the police, though, because it’s a black man.” Then you have to choose between taking care of yourself or taking one for the culture.

When Bess falls in love with Porgy—which also goes into this ableism situation, right?—at first, people see this inequitable relationship—What would a woman like this want to do with a man like that? And Crown insists—assaults, really—Bess into continuing to be with him. That was seen more as the norm than Bess being protected in her choice of having a relationship with Porgy. That what’s beautiful in the opera. There’re socio-political messages or socio-cultural messages that can still be applied to the lives we live today, but as a society I think we’ve become artistically and intellectually lazy.

Art is a universal language we all share, but we have not been very equitable in how we’ve allowed it to be celebrated in the larger discourse of what it means to be human people. Indeed, we haven’t even settled on whether or not we’re going to allow all humans to be considered people.

If there’s two sides to every story, there’s really six. And I guess this is like my life’s passion: I wanna know the stories. Why are humans? I just wanna know.

Do you find that organizations often want something more prescriptive? Like, just tell us how to fix it?
Across the board, especially right now, folks are used to working toward equity reactively and not preemptively. If you’re going to do this work, you need to do it preemptively. This needs to be work that you, as an organization, bureaucracy or corporation say, “We as a people, as a larger organizational narrative, have decided that we are no longer going to perpetuate the historical, systemic and institutional racism that has continued to plague our society.”

Some people look around and say, “Oh crap. There’s nothing but white people here. We should probably do something about that.” And that’s OK, to do it reactively. But I ask folks all the time what their core “why” is for this, and it’s important for this work. Why do you want to do this? The answer I don’t accept is like, “I read this Robin DiAngelo book and it was great.” I’m like, that’s great. Why, though? While it’s important for white allies to not center themselves in the narrative of the racial justice movement, it’s important for them to have some sort of personal connection to why it’s important. If they don’t have a story, they’re not really an ally. They’re an ally as a noun, or maybe even ally as an adjective. But they’re not an ally as a verb.

Breaking down an institution into its component human parts must be scary for institutions, especially in places where you’re supposed to check your personal life at the door. How do you break down resistance to bringing your full humanity to work?
It’s fighting against individualism that was put in place by the enlightenment. Honestly, I feel like the enlightenment period was the worst possible thing that could have happened to humanity. [laughs] The problem was it gave us this false sense of security, that we operate within this discreet vacuum of positivism, and it’s not true.

So, whether you’re for-profit, public sector or nonprofit, your actions and your organization’s actions, your personal intrinsic narrative and organizational narrative and everything that happens in that space is affecting someone that you’re not seeing somewhere. It’s important for you to understand that to be equitable. To be socially equitable is to understand your space and your place and your impact on this larger interconnected machine that is society.
We want to move about in the world knowing that we are as altruistic and empathetic as possible; that we are reducing our harm towards communities outside of our in-group and that we are doing our due diligence to make sure that we preserve society as much as possible.

In order to do that, we have to break down the core: who are the individuals in your organization? How did those individual narratives come up with the departmental narrative and how did those departmental narratives come up to an organizational narrative? And how does that organizational narrative interplay with the sociocultural narrative outside of the organization? That is really what’s important to do. Underneath this huge umbrella are all those constructs of race and gender and socioeconomic status, history, all these certain things. But at first, it’s the most important to do that. Without understanding the why and the impact of it, you’re not actually doing the work. You’re just performing it.

Where you fall in the ever-present art conversation of: When should something—a play, an opera—just be retired? Should they ever be?
You can’t be scurred is the best way to put it. [laughs] Don’t be scurred. But you have to take a risk, and that risk is being brutally transparent and honest about what it is. Like Porgy and Bess, this white dude decided that for three months he was gonna go vacation in a black community and watch them, like a creeper, and then decide from his own paradigms and frameworks what that society meant, and created an entire narrative based on these people’s lives.

You don’t have to throw out Gershwin, but you have to talk about it. When you talk about it from that space, then that’s when you start to go into the art form and look at it more actively. You start to think about what pieces of this are reflective of where we came from, and how black folks were storied in the early 20th century? What pieces are the social stereotypes of dominant culture towards black culture today? And how much of this did Gershwin actually see?

We have to talk about these things because all of that are messaging that has happened and continues to happen today. And yes, [Porgy and Bess] is written by a white man about black people. Yes, from an anthropological standpoint, three months is nowhere near enough to know about this culture to the point where you’re writing this production that has lived in perpetuity.

And there are stories there, messages there, lessons there that we can still glean as long as we aren’t scurred and we talk about it openly and for what it is. We’re not romanticizing it. It’s not just a beautiful stage and music. It is telling a story, implicitly and explicitly.

People like to talk about how this conversation around equity is new. It’s not. Ever since damn near the Crusades, people have said, “You know, what you’re doing is not cool, man. You’re coming in here and telling us that we’re wrong and trying to kill us, and maybe you should just go back to Spain or England or France or Italy or whichever crusade you’re from and leave us alone.” That has always happened. This is not a new concept.