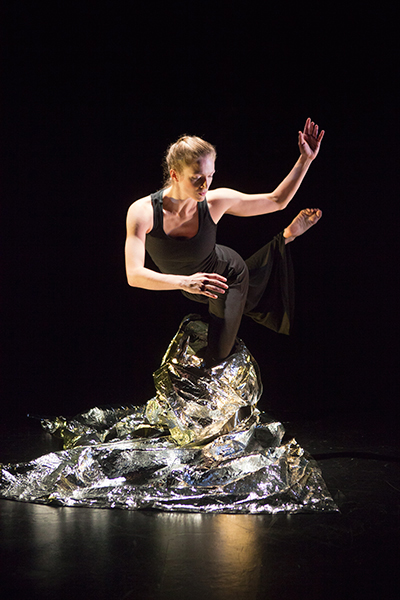 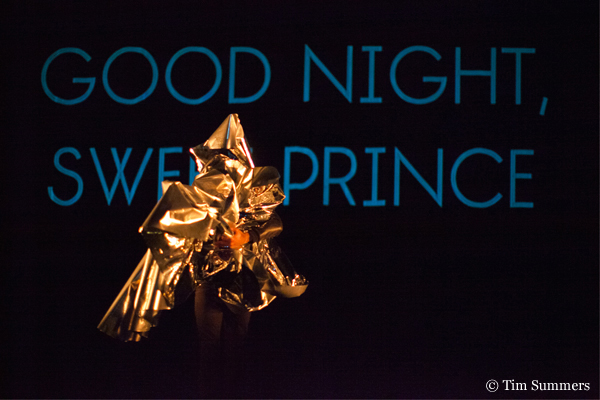 The morning after NW New Works Festival — in which I profusely free associate and write down my morning-after thoughts about some of this year’s performances (Weekend 1).

Did you ever make cardboard tunnels out of kitchen appliance boxes as a kid? I did. Labyrinths constructed from all that silky, scratchy cardboard material, so I have a distinct impression of what it’s like to glide and glissade stomach-first all over that stuff.

In the first performance of the night, directed by Tahni Holt, cardboard figures prominently. The performance opens with a wall of cardboard boxes at one end of the stage. One box has WASHINGTON STATE APPLES printed in bold type, facing outward. I think of Scott Fife’s Leroy, The Big Pup, which I saw two days ago at Tacoma Art Museum, or Rauschenberg’s Cardbirds at Seattle Art Museum. My mind is not generally jogged by cardboard, but suddenly I’m delighted and intrigued by its choreographic possibilities.

Two performers: Lucy Yum an Robert Tyree. The soles of her feet are dirty and she’s wearing a short mermaid-blue sequined tunic. He’s wearing sequins too: a black sequined hoodie and a white sequin wife beater. They sparkle. Even her crotch is sparkling with black sequined underpants. Some of the cardboard has been painted with hot pink stripes. An industrial blower tosses her hair in artificial breeze.

Take the first, weird chapters of Genesis and make a multimedia performance from it with strobe lights, coyote faces (made of real coyote faces), a pomegranate and a chest of drawers. Throw in some Epic of Gilgamesh and the apocryphal Book of Enoch.

Have you ever read about the nephilim? (“There were giants [nephilim] in the earth in those days; and also after that, when the sons of God came in unto the daughters of men, and they bare children to them, the same became mighty men which were of old, men of renown. And God saw that the wickedness of man was great in the earth, and that every imagination of the thoughts of his heart was only evil continually.” Genesis 6:4-5) The Old Testament is full of bizarre, fantastic things, and Herter, Amy Ross and Nikolai Lesnikov took these texts and managed to render antediluvian lore even more absurd than it already is. Archangels in hoodies rapping about Gilgamesh: it contends for my favorite performance of the night.

If they were aiming for Das Unheimliche they took us there. I kept having visions of Whistler’s Mother for some reason. Maybe it had to do with the lonely chair, the grey geometry of the set, the synaesthesia achieved by the heavy ambient drone that fused with the movements of the dancers, the dank lights. Denuded musical color (so grey, so many shades). Fragmented. Slow pulsing lights. A lovely woman writhing. An upright piano being played on by another lovely woman writhing (is deadpan writhing a thing?). Camouflage leggings and chiaroscuro lighting. Repeated gestures, slowly. An invisible girl scooting around the ground, uncannily, in a coat, her legs in the sleeves, her ass dragging. If Giorgio de Chirico did dream sequences they would maybe look like this. Are we supposed to laugh at this uncanny? Would a different audience have laughed? Was the lugubrious poetry of movement supposed to be enough? I was a little bored, honestly.

It starts off sensual and elemental: again with the writhing, statuesquely, a slight suggestion of coitus-and-combat (tiring). The lights are low and Cabeen is wrapped in a long crinkling roll of metallic mylar. It’s a reverse striptease as she twines the silver sheath around her body slowly.

Eventually she stops and steps out of the paper, leaving a shell where her body was. I think of Kader Attia. Abruptly addressing the audience she says, “I dunno, is this working?” Laughter of savvy theater-goers.

She commences a conversation with the audience about “the meaningless crotch in contemporary dance.” She rips off her long Martha Graham-esque skirt and prances around in red hot pants that tug at her crotch. There’s substantial camel toe.

She launches into a storytelling rant about performative bodies, pussies, crotches, menstruation and the gaze. She smears her face with (fake?) menstrual blood that she collects from her crotch, makes stripes on her cheeks with the blood, like war paint. She rubs it on her lips, making them shimmer red. She asks the audience to engage her with “dialog” by throwing wads of different colored paper at her onstage if they agree or disagree with what she’s saying. It’s getting a little predictably feminist for me. But then she starts talking about amenorrhea and recovering from anorexia. I also suffered from anorexia and bulimia for over ten years. Record scratch. Now I’m feeling a little less supercillious.

She talks about visual art and performance culture. When it comes to performance, fashion, photography, film, and so on, there must be a time and place for finger-pointing and accountability, right? (Right?) Do we really just want to have a bloodless Barbie crotch proffered, pointed at our face when we go to a performance (she asks)? I think sometimes we do. Sometimes even I do, because that kind of denuded, hermaphroditic eroticism is utterly intoxicating and mysterious and desirable sometimes.

I was recently asked by an art critic if I consider myself feminist, and I confess feminist issues are not, per se, at the forefront of my consideration when I’m working on or writing or thinking about art. But of course I am female, and the politics of my body and my female psyche and experience boil up out of everything I do. Like Cabeen, I have been through special hells and back, hells that are fueled by the flames of a visual culture in which I am wholly plunged and to which I (for better or worse) contribute. I’ve been a victim of it, I’ve suffered and hated my body, which is as animal as it is spiritual. I suppose it’s good to be reminded that it’s empowering to love menstruating, but frankly I do not. So Cabeen’s rants are clearly necessary and still timely even now when we’re riding the third or fourth wave, even when she’s preaching to the choir.

“Have you been to the one where he dipped his balls in hot water?” I was asked afterwards. Regrettably I have not. It happened at last year’s NW New Works Festival.

Admittedly, I’m a sucker for anything Mike Pham does. The last time I saw him perform was along the NEPO 5K Don’t Run where for two hours he draped himself over, on, and in a broken-down, classic pink Chrysler parked in the sunshine on Beacon Hill. He was wearing gold lamé shorts and a laurel and was chain smoking cigarettes and drinking wine while dancing, writhingly, to Debussy’s Prélude à l’après-midi d’un faune. He was channeling Vaslav Nijinsky. He called his performance Prélude à L’après-midi D’un Faune Pham.

I love how when he performs he’s possessed, and I think of him possessed by Nijinsky. I think Nijinsky was the most beautiful person in the world, with his jeweled eyes and jeweled body: a tragicomic hermaphroditic body. He wrote in his famous diary, “I do not like philosophy because it is a whim of spoiled people. I am Nijinsky. I am the one who dies when he is not loved. I pity myself as I pity God. My mind is so developed that I understand people without talking to them. I see their deeds and understand everything. I understand everything. I am a moujik, a workman, a factory worker, a servant, a master, an aristocrat, the Tsar. God. I am God. I am God. I am all, life, infinity. I will be always and everywhere.”

So when I see Pham onstage revolving like a dervish or a histrionic ballerina, I also think of the Tsar-moujik-God. Pham’s performance is always tongue-in-cheek tragicomically Romantic. It’s a Romantic fuck-you (and fuck-me) too. He’s barely there on stage. It’s too dark to see him. You see him a little bit illuminated by an annoying strobe light. We’re blindfolded by the lack of stage lighting. He carries a huge foil bouquet around, like a crumpled pietà in his outstretched arms as hysterical, gorgeous text projections from Shakespeare’s Hamlet throb on and on the screen behind him. It’s a dirge. It’s some of that denuded eroticism, the perfume of a writhing, failed, funereal body.

Based on Whitman’s “Song of Myself,” a musical performance that was simply euphoric, flawless, an aural ambrosia, All-American nectar, divine clementines and heavy cream and sugar for the ears. I was breathless. I will never forget the mellifluous choral reprise of the phrase “The scent of these arm-pits aroma finer than prayer.” I wanted to listen all night. I’ll follow you to the ends of the earth, Sara Edwards.

I heard there were supposed to be visual projections that weren’t working for some reason, so that’s disappointing I guess. But I wouldn’t at all have missed them if I hadn’t been told.

You can still see all these performances tonight. (Get tickets here.) There’s a whole new group of artists performing next weekend. Supposedly this includes a 17-minute striptease to Ravel’s Boléro, which I really can’t wait to see.

Image by Tim Summers, courtesy of On the Boards