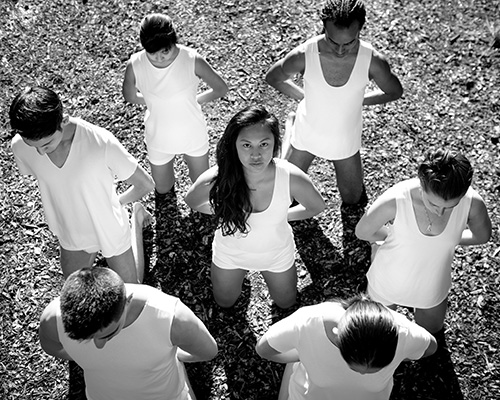 Tuesday, June 7 – Sunday, June 12
ACT Theatre is presenting Bathsheba Doran’s The Mystery of Love & Sex, starring Emily Chisholm and Lorenzo Roberts as two childhood best friends who spend years falling in and out of love with one another, starting long before they know what that love even is or means. Sure, it’s a little bit sitcom and a little bit WB teen drama, but the play is ultimately a lovely travelogue of life’s tortuous emotional journeys—romantic, platonic and familial. Mystery runs through June 26. –Gemma Wilson
ACT Theatre

Thursday, June 9
Perhaps the highlight of this Thursday’s Capitol Hill Art Walk is “Milk, Milk, Lemonade,” the title of a one-night-only show at Calypte Gallery featuring work by superstar artists Alfred Harris and Jeffry Mitchell. They’re offering “collaborated masterpieces on paper” as well as ceramics by the masterful Mitchell. Whether or not there will be fudge on hand at the reception remains to be seen, but you’d better go find out. Also don’t miss Erin Pollock’s “The Good Fight” at Joe Bar, featuring small-scale, drawings of couples chokingly entwined, rendered in weightless shades of blue, and “Queer Feelings” at the Factory, a photographic exhibit of work by Adrien Levitt exploring vulnerability, queerness and our ever-evolving relationships with our bodies. –Amanda Manitach
Various locations

Friday, June 10
Thanks to research conducted by journalists Peter Blecha and Paul de Barros, HistoryLink.org (the online encyclopedia of Washington State history), Hidmo and 206 Zulu are producing an event that brings the city’s distant past into present day. Jazz Intoxication is a recreation of the first-ever jazz performance in Washington state, which was held 98 years ago today in Washington Hall, with Ms. Lillian Smith’s Jazz Band performing at a benefit for the NAACP. Tonight’s immersive musical-theater experience (with food and booze) features vocalist Josephine Howell playing the role of Lillian Smith, backed by modern jazz powerhouse Industrial Revelation, with a troupe of almost two dozen actors and dancers setting period-appropriate ambiance. The entire building will be in character as it appeared and was staffed in 1918, with dramatic and musical vignettes take place in its various nooks, crannies, balconies, stairways and stages. Sounds like a properly unique grand re-opening night for one of Seattle’s most elegant theaters. –Jonathan Zwickel
Washington Hall

Friday, June 10 – Sunday, June 12
Every year around this time On the Boards brings together some of our area’s coolest, most creative performers for the NW New Works Festival to show off experimental works-in-progress over two weekends. This year’s first weekend program includes work from artists like Vanessa Goodman, ilvs strauss, Au Collective, Mallery Avidon and Jeff Aaron Bryant and many more—including a piece from multimedia artist/queer rock musician Paris When it Sizzles!, billed as “video-art-meets-dance-meets-rock-n’-roll-meets-bake-off-competition in a delineated desert landscape.” –Gemma Wilson
On the Boards

Saturday, June 11
Heavy sounds abound on Good to Die Records, Seattle’s premiere proliferator for modern metal music in all its variations. Tonight the label celebrates its five-year anniversary with the most beloved bands on its roster: Headliners Sandrider drops a dose of choogle into their power-trio rock with a hard-charging rhythm section while Portland-based Gaythiest fuses humor and scorn into a brazen assault. Special guests Absolute Monarchs are officially disbanded but return for tonight’s celebration, where they’re sure to make up for lost time with a dangerous, highwire set. –Jonathan Zwickel
Neumos

Saturday, June 11 – Sunday, June 12
Comedian and storyteller Emmett Montgomery had a big year in 2015: he made his national television debut on Last Comic Standing and was chosen one of this magazine’s Artists of the Year. Now he’s building on those accomplishments by recording a debut album with ASpecialThing Records, respected label home to such big names as Marc Maron, Kyle Kinane and Bob Odenkirk. Montgomery’s standup is personal, poetic and unfailingly humane. He’s one of the funniest and most unique voices in Seattle comedy. –Brett Hamil
Annex Theatre