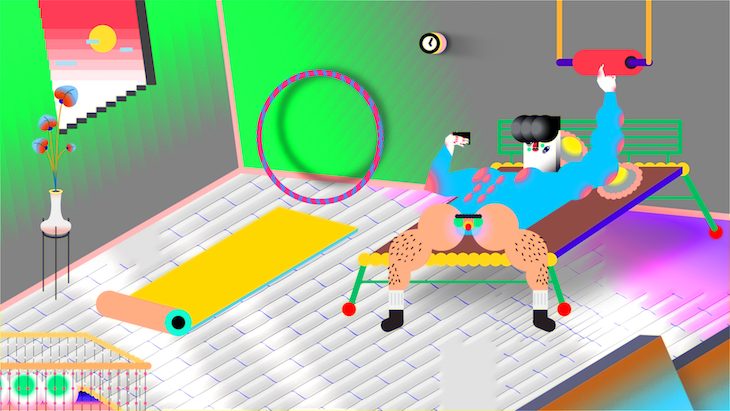 Still from Wong Ping's "Who's the Daddy." Courtesy of the artist and Edouard Malingue Gallery

“Penis is usually curved. When not erected, the curve is of course not apparent, but once erected, it bends either to the left or right. In a civilized society, a perfectly straight penis simply does not exist.” Spectators in front of a wall-sized screen chuckle at the sight of these words; “quoted from Yahoo Answers” appears as subtitles under a string of Chinese characters sprinkling a blue square on a pink, polka-dotted background.

This quote forms the prelude to Who’s the Daddy, a treacherously seductive video animation and installation by Hong Kong artist Wong Ping at Georgetown gallery Interstitial.

As his Internet popularity spilled over into physical art spaces, Ping started to surround his videos with playful 3D installations. During last year’s Art Basel/Miami art fair, the artist placed a batch of Japanese Maneki-neko cats on a plush pink carpet, illuminated by the video “Jungle of Desire.” Things turn darker at Interstitial, where the gallery was transformed into a black box crowded with multiple baby dolls on all fours, VR-goggles strapped to their tiny heads.

The babies set the stage for the exhibition’s main video (also titled “Who’s the Daddy”), in which a Picasso-faced body-builder works out on his bed, his “straight petite penis” the focus of the image. A bulbous baby lies in a crib in the corner. The infant is “a gift,” the body builder explains in a deadpan voiceover, from a woman he met on a dating app. What follows, is a flashback to a romance during which the man takes pleasure in being tortured by the woman. He discovers that this “fetish for being harassed by power” can be traced back to a famous Chinese nursery rhyme telling him to “kiss his father passionately.” The video ends with the song, and the father blackmailing his son to love and kiss him.

It’s undoubtedly part of Ping’s intention, but the scene is unsettling. Some elements of Ping’s other videos, mostly fragments of men watching women, lurking and fantasizing, provoke a similar sense of unease. With Louis CK (the title of this show echoes CK’s recent film I Love You, Daddy) and Lars von Trier in mind, are stories of men and their perversions ever merely an artistic outlet or rather markers of a larger problem, if not in their behavior, then in society? Is Ping’s reveling in his reputation as the “playful pervert” really that innocent?

The artist argues that viewers shouldn’t confuse sex or fetishes in his videos for the main topics, but rather see it as a visual language. He says he uses sex as a storytelling tool to address other things, such as police brutality and the tiny homes that many of Hong Kong’s poorest are forced to live in due to the city’s housing crisis. In “Jungle of Desire” (unfortunately not part of the show) an impotent husband reverts to watching his wife prostitute herself from the closet because the city is inhospitable to those wanting to rest on benches or sleep under bridges.

As such, the depiction of sexual thrills is not merely a way to edge the dulled isolation of choked city living, but a catharsis for repression. Not only sexual, but actual repression: Hong Kong has been under control of others for a long time. The former British colony was “handed over” to China about 20 years ago, and Beijing still holds the city in a tight political grip. Activists cite “business-government collusion and capitalist oppression.” Those are the real perversions.

In “Who’s the Daddy” the real daddy is not the father forcing his son to love him, but the state blackmailing its citizens. Ping says the inspiration for this video came from the patriotic children songs his mother used to play him and that the VR-goggled babies refer to the indoctrination of children.

An interesting link, but the installation elements are more window dressing than stand-alone artworks of enough conceptual merit. You could watch “Who’s the Daddy” online on Ping’s Vimeo channel, but a trip to the gallery is still worthwhile—both to bask in life-sized colors of the animation, but also to support Interstitial in bringing this exciting work to Seattle at a time when the city grapples with a housing crisis of its own. So yes, you could watch Ping’s videos from your tiny apartment, but I propose you laugh at Ping’s visual and sexual exuberances with a bevy of strangers in a room. It might just be cathartic.