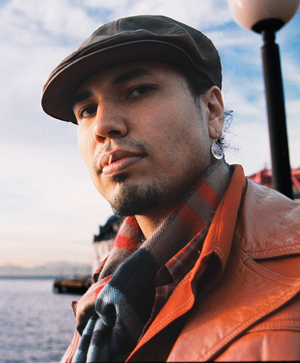 Much discussion has erupted since Macklemore & Ryan Lewis released their song “White Privilige II” on Jan. 22. The first artistic response we’ve seen comes from Gyasi Ross, the Seattle-based attorney-activist-rapper-City Arts contributor who released his debut album Iskootsik: Before Here Was Here on K Records/Cabin Games last summer. Ross recorded “White Privilege III” with Kjell Nelson and Richie Dagger last weekend and released it on Soundcloud a few days ago. The gist: Thank you Macklemore for amplifying the conversation. Now get out of the way and let people of color speak for ourselves.

“There’s a place to meet on middle ground,” says Ross, on the phone from Anchorage, where he’s speaking at a conference on racial equity sponsored by the First Alaskans Institute (Ross is a member of the Blackfeet tribe). “White allies have had a long run of getting some residual shine off their acts of benevolence, but there’s models when that doesn’t happen. Marlon Brando, one of my favorite white allies of all time, sent Sacheen Littlefeather to refuse the Oscar in his place. He put her on the platform and said, ‘Speak for yourself.'” The song shouts out Brando and samples a 1971 BBC interview with Muhammad Ali.

“If your goal is to bring attention to the issue and leverage people of color, there should be a person of color every time you speak about it. You should be paying them if you’re making money off them. They’re contributing to your success. Your only role is to give the platform or write the check, otherwise there’s benefit from someone else’s pain.”

Ross mentions Amir Islam, another activist of color, who penned a powerful essay about “White Privilege II” in the South Seattle Emerald; both he and Islam wrote from a position of respect, reason and love minus any whiff of beef, he says; the song bears out that claim.

“[You and I] wouldn’t be talking about the issue but for the song,” Ross says. “That has value. But once you say you’re using that clout or that flavor without just shutting up and getting out of the way, that’s problematic, that’s history repeating, even as it’s well-intentioned. It’s a role that white allies haven’t been educated on: how to be an ally versus how to be a savior. He opened himself to this critique, probably knowing that critique is part of the evolutionary process. I think it’ll ultimately be beneficial. The next step in the evolution of the white ally is to pass the mic.”