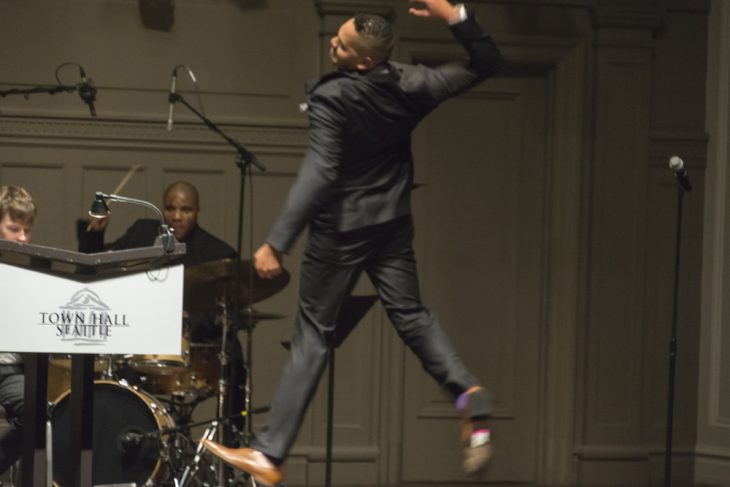 Oluo conducted a 14-piece band—brass, strings, piano, harp, drums, upright bass, vocalist—in jazz and classical-inflected music, at turns beautiful, somber, exuberant and cinematic. In between movements, he told stories about his life. The format was streamlined and fresh, the performance rendered with virtuosity, humor, humility and pathos. Combined, music and words were profoundly moving. The overwhelming effect brought to mind a quote from Joseph Campbell I recently came across:

“The secret cause of all suffering is mortality itself, which is the prime condition of life. It cannot be denied if life is to be affirmed.”

Death must be acknowledged in the celebration of life; all else is delusion. This confounding truth was at the heart of Now I’m Fine.

Oluo’s monologues, delivered with the timing, wit and razor-sharp observation of a stand-up comedian (which he is), were about establishing self despite life’s negations. He started with his nerd-pariah status in high school (“How unnoticeable do you have to be to be noticed for being unnoticeable?”), shared the only words he ever heard his father speak (“I do not approve”), delved into his own difficult fatherhood, found hilarious self-reflection as he learned the true meaning of his Nigerian name, and climaxed with a horrifying medical experience that threatened to physically annihilate the body that houses the identity he’d struggled so long to establish.

This terrible shit really happened to him—a lot of terrible shit for a 30-year-old guy—each story building in tragedy and effect. In his recounting, Oluo was hilariously self-aware, rebutting the usual sentiment—“You’ll get some great material out of it!”—with the reality of having his lips and eyes scabbed shut by disease.

The music provided sweeping counterpoint throughout. By the end of the narrative, Oluo’s suffering delivered to him a melody, life affirming in its uplift, indelible in its simplicity. The band played it in refrain, over and over, rising in volume. Oluo joined on trumpet, a golden blast of vitality. He returned to the podium to conduct, jumping and stomping across the stage. Members of the band and the audience openly wept. The audience took to its feet, spontaneously clapping and scat-singing with the band.

The intensity of the moment suggested that Oluo’s suffering was worth the reward. But that cause-and-effect perspective oversimplifies the experience of Now I’m Fine. We already knew how it ends—it’s right there in the title. But the performance was about something bigger. Each of us knows how our individual story ends. Campbell said so plainly, Now I’m Fine said so poetically—mortality is the prime condition of life. Now: What do you do about it?

Oluo was Town Hall’s first-ever Artist in Residence; his three-month tenure there allowed him to finish Now I’m Fine, which he’d been working on for years. Kudos to Town Hall for launching the residence program—and for picking the right artist. Starting next month, the new Artist in Residence is Geo of the Blue Scholars.