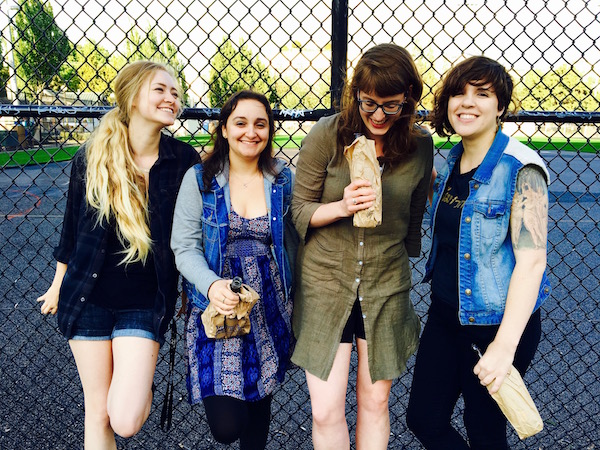 I first heard about Northern Belles two weeks ago, and I’m starting to think I was the only person in town who wasn’t already hip to it. The Seattle-based web series premiered at the Northwest Film Forum on Wednesday night in front of a sold out, insanely enthusiastic crowd. The event was formally attired and featured an open bar. For people who make a ridiculous and somewhat raunchy comedy show, the Northern Belles team really has its shit together.

The show is made by Isabela de Campos and Maddie Downes—the co-creators, writers and stars—and Lael Rogers and Christan Leonard, who direct and produce. They’re not half-assing anything, and it shows. Northern Belles is slick, with impressive production values (“Ooo, a tracking shot!” I said at one point during the screening—not out loud) and a game cast. It’s goofy, good-hearted, and it features a scene where someone eggs the inside of her own car. It’s the show Seattle needs and deserves right now. If only there were some way you could support this kind of project…

I met up with de Campos, Downes, Rogers and Leonard at Cal Anderson Park before the premiere to talk about the show.

What can you tell me about the project?

Isabela de Campos: The project is a single camera comedy about a perfectionist named Dani de Silva and an imperfectionist named Alex O’Neill. They are two roommates navigating life, relationships, living in Seattle and the tumultuous turns of their early 20s. It’s wicked silly.

Maddie Downes: Our original plan—we just had so many horror stories between the two of us that we wanted to write a show about dating, which for two people who worship the Bechdel test was kind of a hard pill to swallow. And then the show became about what happens when the guys weren’t around. So we found this new groove, which was definitely better for us.

Isabela: Maddie and I actually became really good friends through the show. We were friends, but we weren’t particularly close when we started writing the thing. But we got to know each other more and more because we spent every waking hour together for two years and now we live together, as well. Our relationship has really progressed.

Christan Leonard: What is the next step in your relationship?

Maddie: I think adoption. Or one of us euthanizing the other, I’m not sure.

Isabela: We’ll see where it goes.

So you two are the main characters of the show?

Isabela: We figured at a certain point if it was going to be a vanity project that we should really go full force into the vanity.

Maddie: Where I was coming from, about acting in it, is that I would’ve felt guilty if we were going to make somebody take as much time on this shoestring a budget as much as a main character would have to. Eventually I grew to actually want to be in it myself.

Isabela: I was always an acting fame whore, so that’s where I’m coming from. 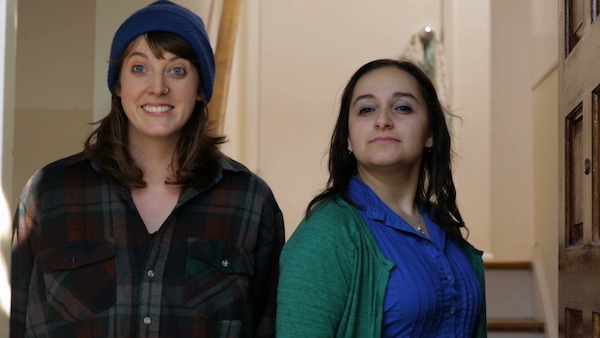 So it originated with Maddie and Isabela and then it branched out to your friends. Explain that progression.

Lael Rogers: I met Christan first, actually. We worked together on Man In High Castle when it was shooting in Seattle and I realized that she was involved in the stand-up comedy scene. The Comedy Womb was going on this documentary tour, so we did that together. And on tour Bela pitched me the idea of shooting or directing this web series, so when we got back home, we met with Maddie and it all just kind of waterfalled from there. Is that a phrase?

Isabela: Lael really deserves the credit in terms of raising the production value. Maddie and I had originally envisioned this as something that we would shoot on the weekends, guerilla-style, on our cell phones, in a kind of fly-by-the-seat-of-our-pants kind of thing and Lael said “Hey, I think you guys have a great product here and I think people will take it really seriously if you film it really seriously.”

Maddie: When Bela and I wrote this, we said, “Let’s just write something in order to say we wrote something.” I wasn’t doing a lot with my time at that point.

Isabela: Neither was I. Nothing. [Laughs]

Maddie: It was just a thing that we were doing because we wanted to do something that would give us a reason to live, or whatever. When Lael and Christan came on they were more like “This could really become a thing that you do. This could be a real-deal cool project that we could do again and not just something to put on your YouTube channel.” And it did! So good job, guys!

Christan: I’ve been sent a lot of scripts and sketches from comics over the years, but this was the first thing that I was like “Okay, I’m willing to devote a lot of my time to this.” I’ve worked on other things that I didn’t believe in that much because I was doing a favor for a friend or I was getting paid. And this was the first time where I read the scripts and I was alike “I want to be a part of this. This could really be something.”

Tell me a little bit about your crew and the working dynamic.

Maddie: Shoot days were the best days of my entire life. Lael has been making films since she started at SU and she has great contacts and she picked a really positive group. It was great and we’d have these wonderful lunch breaks. Bela’s mom catered so she’d cook all this delicious food and drive it to us.

Lael: After having worked on so many unhappy sets, I really believe in creating an atmosphere that allows people to do their best work and feel unified that they’re making something that’s good and that their efforts aren’t going to waste. And I feel like we got that. We had a very unified vibe on set.

Maddie: We tried to be good to people. We fed them, we gave them coffee. And Lael was a really efficient and respectful director. And then Christan came on and did a really good job making sure that everyone knew what to do, knew where to go, was on time. And that’s kind of unglamorous but really, really important. A lot of our moments of creativity came about because Lael and Christan could hold the space for us to have a good time and be really creative.

Isabela: And Christan was the problem solver in chief, too. Whenever we had a problem on set or in the writing and we couldn’t figure it out, we’d send it to Christan and she would have the solution, without fail. So, if that were an IMDB credit, that’s what it would be for her—Problem Solver in Chief.

I like the fact that you’re coming out of the gate with the high production values.

Maddie: Me too, because when someone says the words “web series,” there’s a part of your brain that just dies permanently forever.

Christan: I like to think that this is just below House Of Cards.

Lael: Strike that from the record.

That’s actually going to be the headline.

Here’s a really original question: what were your influences when you created this thing?

Maddie: Nobody’s ever asked us this, can you believe that? My number one influence is—and you can gag all you want—but it’s just riffing with Bela. I would write these things and if it made Bela laugh really hard, it stayed. We also definitely have a lot of 30 Rock in our DNA.

Isabela: We’re of the 30 Rock and Parks and Rec generation so both of those shows had an impact on us and the way we view things. Personally for me, my favorite comedian is Maria Bamford. She is my absolute idol.

Maddie: I don’t think I’ve ever said this out loud, but one influence is Tommy Boy. Because I’m much bigger than Bela and I yell a lot.

Isabela: The first time we saw ourselves on the monitor in the same frame on screen we hadn’t realized how ridiculous we look next to each other. Because I’m so short and she’s so tall. We look like we’re out of casting, purposefully to look this ridiculous, but we just naturally do in real life.

Lael: All four of us have very distinctly different senses of humor. I refer to our group as a four-wheeled tricycle in terms of our dynamic and our ability to put energy towards something. Like, how we overrule each other sometimes in terms of decision-making. If three of the wheels are on the ground, that’s the way we’re going to go. And often a four-wheeler can go over some rough terrain, but sometimes somebody needs to be lifted off the ground for a minute. And that’s how we handle it.

What’s your target for a budget?

Christan: $65,000 for the rest of the season. Four more episodes. We cashed in a lot of favors last time, we had a lot of people donate their time and energy and money and equipment and unfortunately we can’t count on that a second time around. And I’m very proud of the product we’ve made, but there are things that would’ve really fulfilled their vision a little more. So I know it’s a lot of money to ask for but it’s definitely going to be well spent. We spent about eight or nine thousand on our pilot, whereas a network pilot costs 1.3 million, so…

Isabela: [Maddie and I] came from not only comedy but also a theater background, and that’s a lot of “we’re going to do everything an entire play for a twelve-week run for 200 dollars.” And film is a bit more…you notice in the end product if you haven’t spent the money on things.

Christan: We really want to produce the rest of the season and release it and then do a second season. We want to make this and make a hell of a lot more of it and unfortunately that takes a little bit of money.

Assuming it doesn’t get picked up by a network.

Maddie: You’ve gotta find some wood to knock on right now, do you understand me?

Christan: I’m gonna push you down the stairs, Travis.