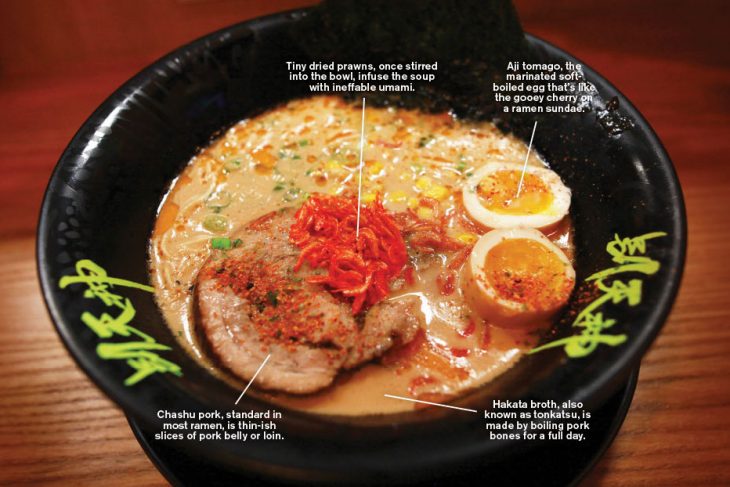 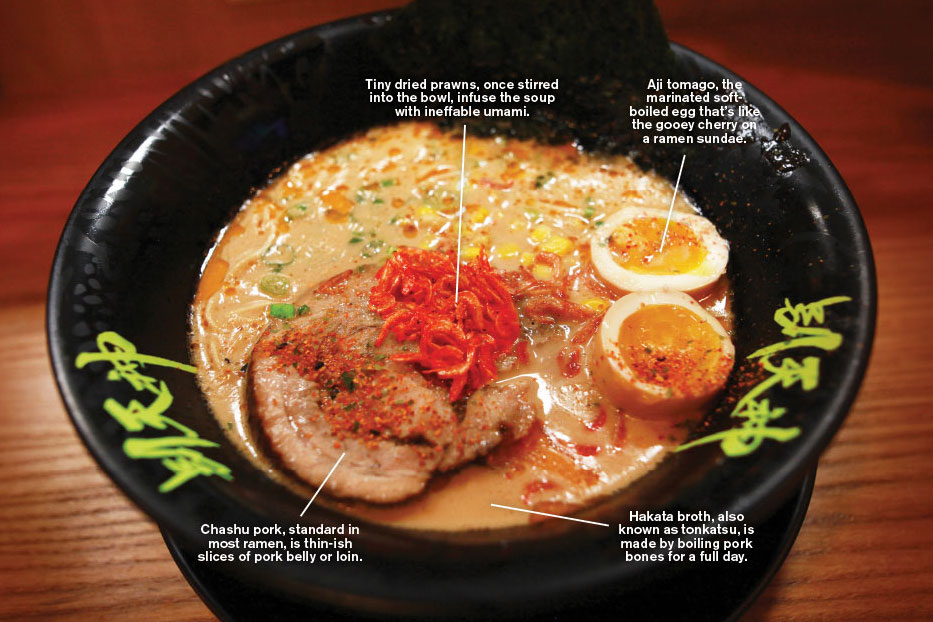 Seattle food-trend update, 2017 edition: At least six new ramen joints have appeared in the last year, four on Capitol Hill alone, all of those within a walkable quarter-mile. The neighborhood is now a Japanese-noodle-soup nexus, yours for the slurping.

The ramen we’re talking about is as close to the powder-packeted, Styrofoam-cupped dorm rations of your freshman year as your CliffsNotes were to Crime and Punishment. Due to its elemental form—broth, flavoring, noodles, toppings—ramen is an endlessly iterated delicacy, and many fanatics have invested more time, thought and stomach space in it than I have (yet). There are songs, websites and books dedicated to the art and science of ramen. There’s even a movie: Tampopo, a Japanese comedy from 1985 that was billed as the world’s first “ramen Western.” One of its iconic scenes takes place in a restaurant, as an old man who’s studied ramen for 40 years (!)  guides a less-evolved eater:

It goes on. These instructions, painful to hear on an empty stomach, reveal some of the dish’s simple mystery, and they’re worth keeping in mind at Ooink, the established standard-bearer of Capitol Hill’s fledgling ramen culture and perhaps the best in the entire city.

Hidden above the QFC on Broadway and Pike, Ooink opened a year ago in a small, bright space with an equally small menu. While I was waiting for my dining companion, I struck up a conversation with a trucker-hatted guy hanging out by the door; he turned out to be chef-owner Chong Boon Ooi. After he seated us, Ooi continued the conversation, introducing his wife, co-owner Jiaxin Wang, and offering his personal take on ramen.

Ooi’s no purist—he follows his heart, his Malaysian roots and his kitchen training at Michelin-starred restaurants in Paris and Las Vegas. But he is a perfectionist, and after our meal he invited us into the kitchen to boast about his technique: sturdy wheat noodles crafted to exact length and width specifications (they fold over once in the bowl) by a producer in South Seattle; house-made aji tamago, or marinated soft-boiled eggs, the sweet, yolky cherry on the ramen sundae.

He showed us two 40-gallon vats seething on gas burners. One was full of broth—90 lbs. of pork bones, boiled for 26 hours, whose collagen imparts the soup’s silky heft (Ooink serves a seaweed-based vegetarian broth as well.) The other was tare, or flavoring, based variously on soy sauce, sea salt or miso paste—diner’s choice—and enriched with a host of other ingredients like vinegar, mirin and sake. The broth and the tare come together only when served, topped with slices of chashu (braised pork belly), seaweed paper, bamboo shoots (the shinachiku described so eloquently in Tampopo), green onion, garlic chips. Bottles of soy sauce and chili oil on the table are intended only for Ooink’s excellent gyoza; whichever of his six broth/flavoring combos you choose, Ooi’s ramen is perfect as-is. A bouquet in a bowl, balancing flavor, color and texture. Gestalt. It will haunt you. 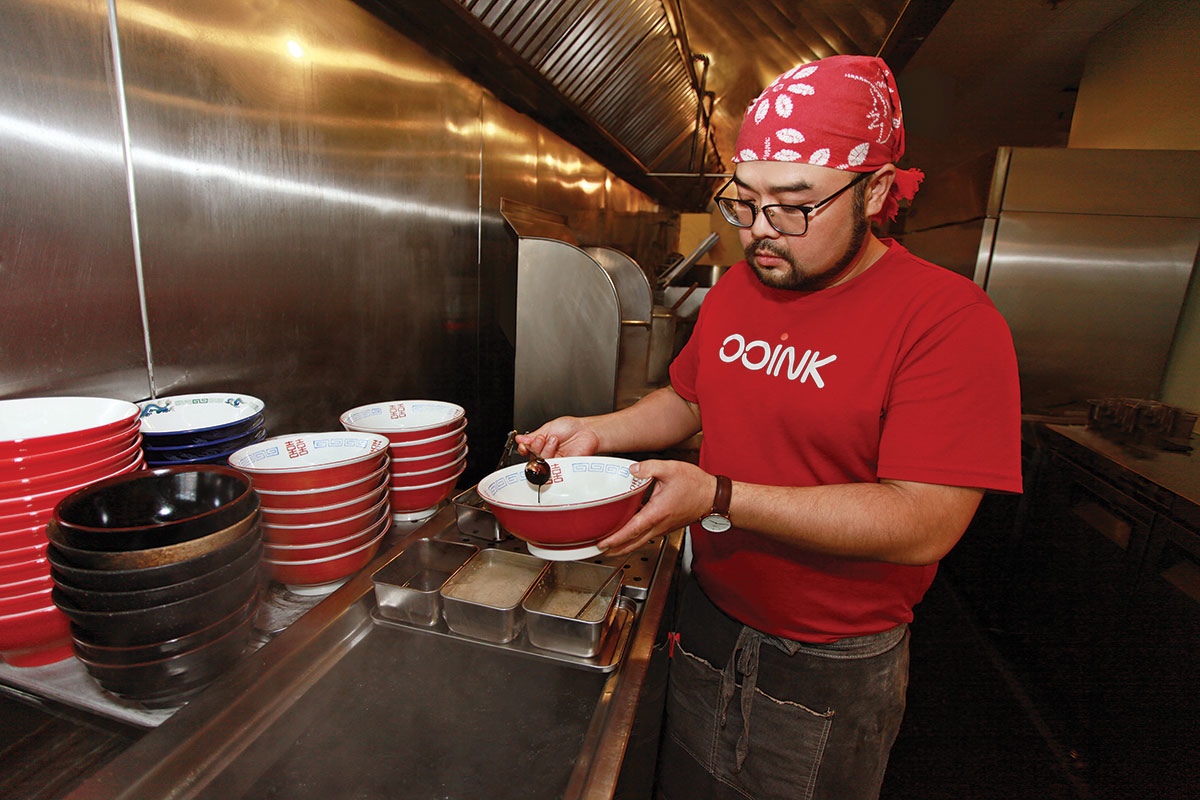 A few blocks west are Tentenyu and Kazuki, two Japanese chains making forays into the American market. Of these, Kazuki serves superior ramen—their chashu pork is uniquely smoky and sweet—but Tentenyu’s airy ambiance is more welcoming. Try them simply for the sake of being thorough, because Ooink’s only rival on the Hill is weeks-old Betsutenjin.

I’ve never been to Tokyo, but I’ve heard tell of streets lined with ramen shops, tended by chefs who’ve served the same eight seats for decades—a portrait, certainly romanticized, of Japanese humility, perseverance and mindfulness. In its snug subterranean hum, barely-there menu and exposed kitchen, Betsutenjin, a branch of another Japanese chain, conjures a similar vibe. A couple doors down from Neumos, it’s open until 2 a.m. and plays Japanese sports-network TV—rare treats on the Hill and further nods to Edokko sophistication.

There are a mere two soups here; get the prawn miso. Rather than meaty curls of prawn meat, your ramen comes with a pink mound of tiny dried shrimps redolent of an Asian grocery. A palette of condiments, including pickled ginger, a sesame-seed grinder and, most crucially, white pepper, are yours to administer. As you stir the bowl, the hot broth mellows the prawns’ piscine funk and their ineffable umami suffuses the soup, and suddenly you’ve achieved a whole new level of flavor.