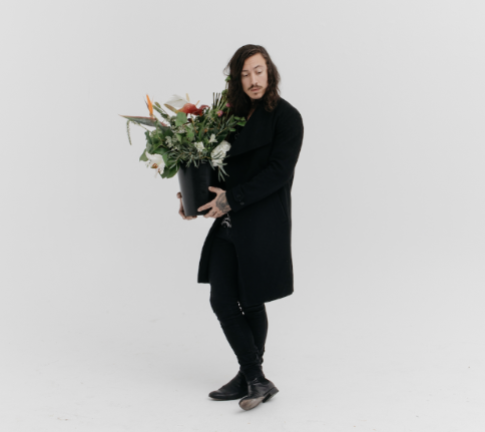 Inside a private second-floor room in Canlis, Seattle’s venerable old-money, fine-dining destination, floor-to-ceiling windows provide a panoramic view of Lake Union at sunset. As the light fades, the glow of candles and a large chandelier become more pronounced, bathing the room in warm light. Sharply-dressed guests sip glasses of wine and make themselves at home on plush cream sofas. The line between laid-back Pacific Northwesterners and swanky Los Angelenos blurs as guests mingle and the wine kicks in.

Noah Gundersen makes his way down the aisle to the front of the room and an altar of sorts, decorated with a turntable and elevated speaker. “We’re going to do this in sections so you don’t feel too trapped,” he says, setting down his wine glass and smiling at the crowd. Behind him, wildfire smoke obscures the normally pristine view of Lake Union and the distant mountains, reminiscent of the fog-machine haze that often surrounds Gundersen and his band in their live performances. He places a vinyl test pressing of his new album on the turntable and the listening party begins.

Released to the public on Sept. 22, White Noise is a departure from the singer-songwriter’s previous, acoustic-oriented albums. With its electric guitars and synthesizers, this latest work juxtaposes energies and moods. It’s melodic and chaotic, abrasive and calming, frantic and ambient.

“There’s technology, distractedness, anxiety,” Gundersen tells me the following day while signing copies of his album, and he could be talking about the album specifically or the world in general. “It’s a record about living in 2017.”

During the recording and promotion of the album, Gundersen enlisted the help of several Seattle-area artists, which he describes as a testament to the region’s art community. Making White Noise, he learned that music is best as a collaborative effort.

“I grew up writing songs in my bedroom,” he says. “I thought, ‘This is my thing. I’m going to be in control of it and do everything myself.’ But there’s a pretty low ceiling for that. It took me relinquishing a little bit of control and recognizing that I need other people to make something better, which is analogous for life in general.”

The album lives up to its name, incorporating ambient sounds as transitions between some tracks. “Dry Year,” written and recorded on the night of the 2016 presidential election, touches on political tension and the “unseasonable weight in the air,” concluding with the sound of rainfall. It evokes a release of tension as the album approaches its closing number, the acoustic “Send the Rain (to Everyone).”

But before the downpour, Gundersen takes listeners through the emotional high of “Wake Me Up, I’m Drowning.” Soft piano and strings morph into Gundersen’s desperate wails to awake from an awful dream. So begins this closing trilogy of songs that incorporate water: First, the water consumes. Then, it cleanses. Upon death, it leaves the body and returns to the earth. These songs parallel Gundersen’s early albums, building on foundations of piano and acoustic guitar. The line “Send the rain, send my love to everyone” concludes the album, feeling like a prayer.

“I never want to pretend like I have any answers, but I do feel like we lose a bit of our humanity by being constantly distracted,” he says, elaborating on the themes of technological distraction that permeate the record. “It’s easy to get caught up in something that makes us feel good for a second and keeps us chasing this unachievable dragon.”

Gundersen’s listening party slayed one of those dragons by bringing people together for a common experience. In an age of distractions, quietly listening to music with strangers is awkward, but Gundersen believes a little awkwardness is beneficial. Listening to an album with others brings a heightened awareness of one’s surroundings. As White Noise faded out, the guests’ praise of the album’s nuance suggest that he just might be onto something.