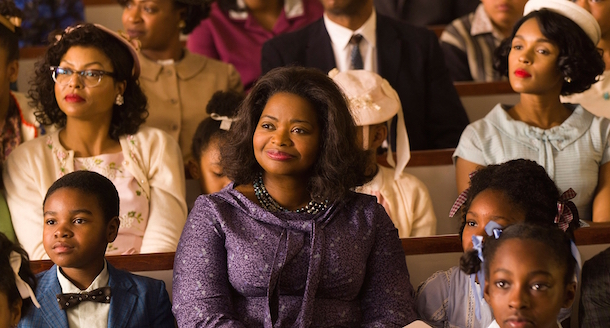 “As long as you are convinced you’ve never done anything, you can never do anything.” –Malcolm X

As if it were a palate cleanser, I leapt to see Hidden Figures in the theatre the day after watching Werner Herzog’s documentary Lo And Behold on Netflix. In the latter film, Herzog tells the story of the Internet’s mysterious past and dubious future—from the catacombs of UCLA in the 1960s where the first text message was sent, to a haunted township of hermits whose hypersensitive nervous systems can’t abide electromagnetic waves sent through the air. People of color make occasional cameos in this Herzogian hellscape: a South Asian engineer walks us through the science of self-driving cars, while a gaggle of Buddhist Monks forage a desolate planet abandoned by people who fled to space. But the rarity of these appearances ultimately reinforces Herzog’s vision of the future as one where people of color in general—and Black people in specific—exist only on the margins (if at all).

This customary whitewashing is older than Herzog, 74, himself. From A Trip To The Moon (1902) to Metropolis (1927) to 2001: A Space Odyssey (1968) to The Lobster (2016), visions of a multicultural future have seldom been seen in the multiplex, as whites in dystopic disaster narratives indulge futurist fantasies of themselves as pioneers of space or persecuted minorities. In the 2016 musical meet-cute La La Land, John Legend tells Ryan Gosling, “You’re holding onto the past, but jazz is about the future.” Legend’s heart is in the right place, but he should hope to be wrong: If jazz were not framed as a quaint throwback, Legend’s own role may’ve been the first to fall to the cutting room floor.

To the basic viewer, Lo And Behold is practically an all-white movie not as a matter of conscious erasure, but because it truly re-presents a high-tech world that is devoid of color. Even in Herzog’s segment about gaming addicts, there is no space to mention that John Henry Thompson—a Black programmer from Jamaica—was singlehandedly responsible for inventing the programming language that most web-based gaming systems use.

Hidden Figures shows us something else. Based on Margot Lee Shetterly’s 2016 book of the same name, Hidden Figures dramatizes the story of Black women employed by NASA in the mid-20th century. After President Roosevelt forbid racial discrimination in the nation’s defense industries with Executive Order 8802, demand literally skyrocketed for labor that could help propel the country past the Soviets in the space race. With lead performances by Taraji P. Henson, Octavia Spencer and Janelle Monáe, Hidden Figures valorizes the efforts of Dorothy Vaughan (head of NASA’s segregated West Area Computing Unit), engineer and Civil Rights pioneer Mary Jackson and math prodigy Katherine Johnson.

Film critic Richard Brody argued in The New Yorker that (white) director Theodore Melfi made the narrative of Hidden Figures less explicitly political than it may’ve been in the hands of Ava DuVernay or Spike Lee. As Mary Jackson, Janelle Monáe does stand and deliver to desegregate a Jim Crow junior college. But by focusing on the public as well as the private lives of its protagonists, the film is a historical drama with poignant shades of the slice-of-life genre. Indeed, Hidden Figures finesses a tight rope that many message films fail on. In light of heavy-handed historical narratives like Lincoln and 12 Years A Slave, audiences are right to expect a trade-off between a film’s social “importance” and its entertainment value. Alluring costume design (hard to go wrong with mid-century modern fashion) and scoring by Pharrell Williams add poppy production values. “Don’t act like you was there when you wasn’t,” riffs Williams, who might be lured in by the charms of Hidden Figures while wanting no part of the historical disparities it details.

On one hand, the world of Hidden Figures is distant: NASA’s (now-endangered) research into climate change has equaled—if not surpassed—the space program in terms of visibility and relevance. On the other hand, this narrative of tech and Black achievement should feel as familiar as Facebook. A 2015 feature in The Fader shone light on Black youths who create slang (remember “on fleek”?) and memes online that trickle upwards to major corporate ad campaigns. As K.J. Greene wrote in a 2008 essay “Lady Sings the Blues,” Black artists “had no input in [copyright law], and examination reveals that it is in some respects incompatible with Black cultural production.”

In his recently released book Platform Capitalism, Nick Srnicek attempted to argue that “in examining the activities of users online, it is hard to make the case that what they do is labor.” Srnicek is sorely mistaken about the class dynamics of communicative capitalism, and an episode from the spectacle surrounding Hidden Figures illustrates why: At the Golden Globes awards show on Sunday, Jan. 8, journalist Jenna Bush Hager praised Pharrell Williams for composing the music for Hidden Fences—an unfortunate portmanteau of the film Hidden Figures and the Denzel Washington-directed drama Fences. The ensuing hashtag #HiddenFences bubbled over on Twitter, with (mostly Black) users providing a salient narrative of the night. The day after, major press outlets absorbed the outrage into online content, collected ad revenue derived from “articles” that were little more than litanies of quoted tweets, and—of course—redistributed none of the generated wealth back to the galaxy of Black Twitter that spun the story in the first place.

The structural reality of the United States is such that the deep space of the Black mind is often consigned to unappreciated obscurity. But Hidden Figures brings a people’s history of technical achievement into the light. Hidden Figures succeeds as a counterfactual chronicle of Black achievement at a time when faces of color are underrepresented in the tech industries pulling us into the future; as a patriotic tale of America’s Cold War ingenuity at a moment when our incoming head-of-state won’t unequivocally deny that he is compromised by Russian ties. Unlike Herzog’s gloomy Lo And Behold, it’s a narrative weaved with hope and light, released into an era described—by no less than Michelle Obama—as increasingly devoid of hope.

Herzog can go on writing some out of the unlived future. But in the past, online, or in space, an old maxim holds: No matter where you are, there we are.