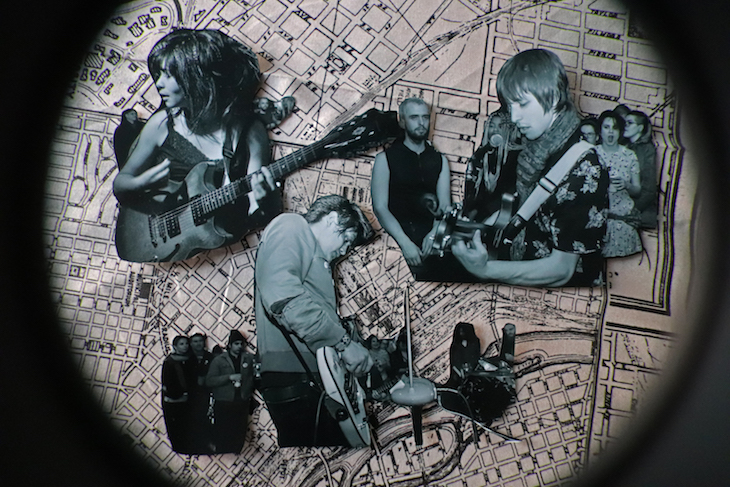 Since landing in 2018’s Best New Music issue earlier this month, Tres Leches has been hella busy. The post-punk trio is hard at work on their debut LP for release later this year, and in the meantime, they’re releasing a single, the angular anthem “No Llores,” and they made a weird little no-budget video to go with it, which we’re psyched to premiere today.

Before we get there let’s dig into the gooey details of this young, nervy, experimental crew. We asked the band members 10 questions; multi-instrumentalist Ulises Mariscal, who wrote “No Llores,” gave us their answers.

So what’s this song about?
The song is about respecting and appreciating life as well as death and not fearing what happens next. It also talks about superstitions and how we as humans always try to find an explanation for the negative and the positive things that happen in our daily lives.

I wrote this song mostly from my own experiences growing up in a religious environment and how fear was the main tool to manipulate us as kids. That, coupled with overcoming depression. One day I realized that death was inevitable and that I wanted to leave something meaningful behind. I didn’t want to be someone living in fear.

No what’s this song really about?
It’s actually about me drinking too much coffee.

Who’s in the band? Please assign a relevant avatar, real or fictional, to each member.
Ulises Mariscal

What’s one band name you didn’t choose?
Los Trastes (the Dishes). I’m kind of glad I never said anything about this.

What bands were you in previously and when did this current one begin?
We were all in smaller short-lived projects. Tres Leches have been playing together for about three years. We released our EP in October of 2017.

Where do you live?
Alaia and Ulises live in beautiful Capitol Hill and Zander lives in Olympia, WA.

What was the last thing you bought off the internet?
Tickets to see Cafe Tacvba. Last time I saw them was back in Mexico City in 2005 when I was 14 so I’m really excited to go see them. [Cafe Tacvba play the Moore on Sept. 11.]

What’s your most unlikely influence?
I used to play soccer in college and took it a little too seriously. It made me realize that I need to have fun in whatever I do, and I’m having a lot of fun making art and music, and happy that I made this choice.

Which emoji do you use the most?
? I always imagine a strange voice saying “What’s up?!” when I see it.

Where was your most recent gig and where’s your next?
It was at the Clock-out Lounge opening for the Black Tones’ record release and it was an honor to play with such amazing musicians and kind people. I love sharing the stage with them. Next, we’re playing Filson Flagship Concert on Thursday, May 24. After that, we have Upstream on Sunday, June 3 at the Central Saloon.

Filson and City Arts’ in-store concert series begins this Saturday, May 19 with Moon Palace playing C.C. Filson in Ballard and continues on Thursday, May 24 with Tres Leches, the Sons of Rainier and Bread & Butter playing the Filson Flagship in SoDo. Tickets are free with RSVP.