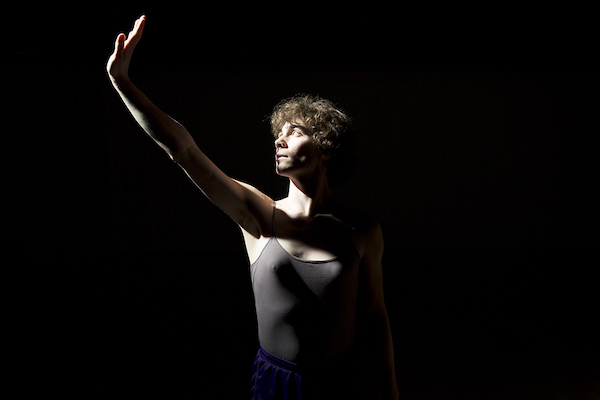 An exquisitely pointed foot is marred by a casual adjustment of clothing, a graceful arabesque interrupted by a few Jane Fonda-style crunches humorously timed to music. Quinn Andrew Hallenbeck’s solo serenade in c, performed last weekend at Velocity Dance Center’s annual Next Fest NW, thoughtfully integrates presentational ballet and faltering moments of self doubt. One quick sideways glance undermines the next moment’s confident air. It’s funny but also heartwrenching. We watch again and again as she hesitates and then reaffirms. Hallenbeck eventually leaves the stage as the music and lights continue, suggesting a letting go of past ambitions.

“pastFORWARD,” this year’s Next Fest theme, alludes to the connection between past, present and future. Hallenbeck’s piece takes the past and present to a personal level, but the theme was explored in different ways and to different extents during the winter performance showcase, which often hints at work to come in the new year.

Hayley Shannon’s trio, She who walks in shadows walks in light, for instance, clearly has a futuristic vibe. Set to a metallic aural landscape performed by Devin Bews, Shannon’s snaking spine navigates her through a world of slithering robotic creatures. On the more oblique side, Alisa Popova’s installation, Three Stripes and You’re Out, features two soccer players in track suits that meet your gaze with unflinchingly intensity.

Ethan Folk and Ty Wardwell break the fourth wall to frame their work, guys like me, inside a clever gimmick. The two men distribute envelopes of money to six random audience members, asking each to vote with their dollars for the piece they most want to see: a social/political gender piece, a “navel-gazing emotional therapy” work, or a “creamy dreamy wildcard.” Their performance (the “creamy dreamy wildcard,” it turns out) follows in the tradition of performance art where it’s more about completing tasks than composed dance moves. Wardwell sits atop Folk’s shoulders as they each gleefully shotgun a La Croix. Folk chews up a stick of butter and spits it, liquefied, onto a bowl of popcorn. Wardwell munches said popcorn. While the outlandish tasks might be compelling enough to watch, what makes the piece is the subtly played relationship. Small asides to one another the audience can’t quite catch. Little moments of confusion as they signal to each other inside the piece. Impish smiles when they both know what’s coming next. Their charming antics play into a fast-paced monologue where Folk lists all the things “guys like me” do, including making “art about guys like me.” It seems Wardwell and Folk are turning a self-aware and critical eye to what it means for white men to be making work these days, and the privilege surrounding who gets to make work and who gets to make that decision.

Not easily tied to the theme, but a standout work nonetheless, BECOMING THE BEST, by Sabina Moe, begins with a trio brushing fastidiously at their black suit jackets like preening birds. Shane Donohue shows his dancing chops in a solo of swooning, fidgeting and falling that evolves into a full-on courtship ritual. Lunging and strutting with his coat tails pulled high over his head, his elaborate presentation is met with only pointed apathy from Elby Brosch and Alyssa Casey, who carefully pluck their way through a precise walking pattern. Moe is clearly referencing birds, but watching their gentle avian nuzzling or bound fluttering of frustration, the desires of these creatures become something very human. Like serenade and guys, BECOMING hinges on choreographed facial expressions. Each of these pieces brings an authenticity and nuance of mannerisms that make this art remarkably relatable while also adding to the emotional complexity of the work.

Closing the show is The Renovation by Syniva Whitney, an imaginative investigation of the Velocity Dance Center neighborhood and building itself. The cast of five dance among moveable set pieces painted to mimic the brick walls and floor boards of Velocity’s stage. A prop siren references the next door police station and pieces of Astroturf the Cal Anderson playfield. These images weave into a Capitol Hill dreamscape while the playful, collaborative movement speaks to the community of this space.

Then, like a seasoned developer, Will Courtney delivers a plan for “improvements” to the space including wainscoting, a water feature, six steam-sonic showers, and pear-elderberry kombucha on tap. As the improvements get more ridiculous, Courtney shouts suggestions while darting between the back studios, hallway, stage and even the tech booth. In the final moments, three figures enter in elaborate masks that appear to have evolved organically from neighborhood artifacts. Like building zombies from the future, they make strangely beautiful witnesses to this moment and space. It’s a haunting reflection on the shifting cultural landscape of Capitol Hill that lends concrete example to the conceptual theme of pastFORWARD.